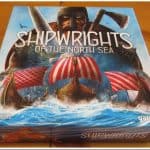 You are reading
Written Review – Shipwrights of the North Sea

It’s nearly raiding season, and if you and your fellow Viking warriors want to be on top of your pillaging game, you’re going to need one thing: ships.

Shipwrights of the North Sea is a game about building a fleet of ships in a Viking village.  Place your workers, build your ships, and beat your opponents out of port to claim the best loot and plunder in the North Sea. You’ll need to keep track of your resources as well as manage gold to get craftsmen on your side to make the best ships you possibly can. Beware, though, as not everyone in the settlement is out to help you!

[stat image – contact Raine or Kae for this. Please provide the number of players, the time it takes to play the game, and the publisher when you contact us]

The Treasure Hold (Inside the Box)

Shipwrights of the North Sea ships with the following pillaged loot: 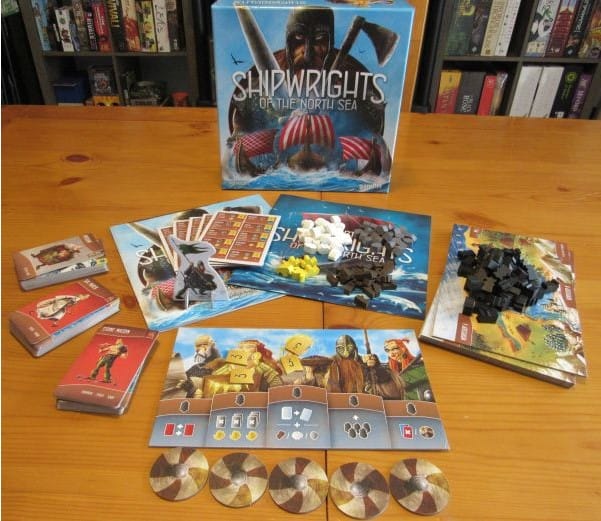 When the Sea Calls, Build Ships!

Shipwrights is a deceptively easy game that can be picked up on the first playthrough.  Each player sets up their game board, sets their gold to 5, pulls 3 workers from the main supply, and two resources of their choice (oak, wool, or iron).  A randomly selected player then receives the “Pioneer Token”, which is used to denote turn order, and play commences!

A player reference card showing what actions can be taken.

Shipwrights of the North Sea is broken down into three phases:  Morning Phase, Afternoon Phase, and the Evening Phase.

During this phase, all players receive three cards.  The draw mechanic is one of my favorite things about this game.  The starting player draws a number of cards equal to the number of players +1, they pick one, and pass the cards down. This process is repeated until all players have 3 cards.

During the Afternoon Phase there are a number of actions that are available.  Play begins with the player who has the “Pioneer Token” and continues clockwise.  Each player takes their turn in full.

There are several actions you can take during this phase, and as long as you have the resources, you can take as many actions as you like. These actions include:

This is the phase where all the action occurs.  You must either play or discard every card in your hand during your turn. A player may never have more than 4 craftsman on their board, and in the base game, having the wrong craftsman in play can be debilitating.  Grey townsfolk cards have special abilities, and can really change the tide of the game, for instance: the conspirator can steal an enemy’s craftsman and put it on your board.  The assassin can remove craftsman from the game board (if you have the wrong craftsman, in the base game, this is the only way to get rid of them), and the king gives you five gold. There are many others, however, I don’t want to ruin the WHOLE game for you.

An example of a ship card. This card shows the necessary resources needed to build it at the bottom.

There are two ship berths on your game board, which means you can be building two ships at a time. If one of these slots is empty you can place a ship from your hand into the open berth. If not, you just have to discard that ship. There are two methods of getting a ship out of your berth: generally the best option is to build it completely, but if you just can’t get what you need, you can play a barbarian and remove it from your own berth (Or remove a ship from an opponents berth, because, why not?).

When you have the appropriate resources, gold, workers, and craftsmen, you can finish a ship by returning all the resources and craftsman to the main supply and discard pile respectively, then your ship is constructed. Four ships signals the end of the game, with everyone taking their last turn.

The best part about building ships is that they often have benefits associated with having them fully constructed. Some allow more than 8 resources in your mill, some give you gold each turn, and some produce more workers. That being said, some ships also apply negatives: less gold, fewer workers, etc. This is why you need to manage your cards and resources strategically.

The Evening Phase is when gold and workers are distributed, and when, if you have more than eight resources in your mill, you must discard down to eight (unless you have ships modifying your storage). Gold is calculated by the number of workers you have remaining at the end of your turn, plus modifiers from your constructed ships. Everyone gets one worker, plus modifiers from constructed ships. At this point, the Pioneer moves down the line, and the turn order repeats until someone has built four ships. Then Victory Points are assessed.  Each ship has a point value as well as a military value. The player with the highest military value on all their ships receives an extra 3 Victory Points.  There are also buildings which modify VP based on the number of non military ships you have, gold in your treasury, or sometimes you just get a free VP or two.

Shipwrights of the North Sea:  The Townspeople Expansion

The Townspeople Expansion  takes the base game of Shipwrights and adds a few new actions which can be taken for the price of one worker during your Afternoon Phase.  They are each named after the townsperson who delivers this service.  You may only utilize this board once per turn by placing a worker on the Townspeople board.  Once a worker has been placed, no one else may use that townsperson until the board has been cleared.  The actions you can take are as follows:

Instead of gaining one new Worker at the beginning of each evening phase, all players now gain 2 (unless modified by constructed ships)

Bringing Out Your Inner Viking!

When I got this game from Garphill, the first thing that struck me was the artwork.  Every piece is a beautiful vignette and the characters just pop off the page and cards.  There is actually a really nice insert in the game about the artist, with some other really great pictures, and a short story about the game’s development.  Shipwrights of the Northern Sear has my favorite illustrations of any game I have reviewed thus far. It seems much more personal, and the care just shines right through.

The ruleset is very simple, elegant, and quick to pick up.  Its a little daunting the first round or two, but it picks up easy. The instruction manual is put together thoughtfully, and in an order that makes sense with the flow of play.  All of the ships are named according to real historical ships, and can be a trick to pronounce. The designer must have foreseen this because he was kind enough to include a pronunciation guide (which I glossed over and immediately commenced to mispronouncing them like a drunken imbecile).

Let me tell you, without the expansion this game is RUTHLESS.  One mistake can kill the whole game for you, or worse, one opponent with just the right combination of cards can completely destroy a well thought-out strategy and leave you completely in ruins.

Its a high-tension game that can finish quite unexpectedly at times if you get a hand that’s right in the sweet spot you need.

With the expansion it’s much more forgiving.  Mistakes can be ameliorated often for the low, low cost of just one worker. It also makes it easier to defend those necessary ships or craftsman if the need arises.

This game is amazing no matter how many people are playing.  Two players is a lot of fun, because you really only have one target, and like I said, there’s some really satisfying mischief to be made in this game.  More than two players, and everybody is fighting for those perfect cards, and, if you’re winning, it can be easy for the other players to band together and take you down.  The downside of playing with more than three players is, of course, the same with most games: time.  It can turn into a rather long session with five players, but I never got bored, or didn’t want to finish.

As a whole, I absolutely love this game.  Its quick, its easy, and it finds the perfect blend of nuance and ease of play to keep me coming back time after time!