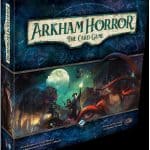 You are reading
Arkham Horror: The Card Game – A Frighteningly Fun LCG 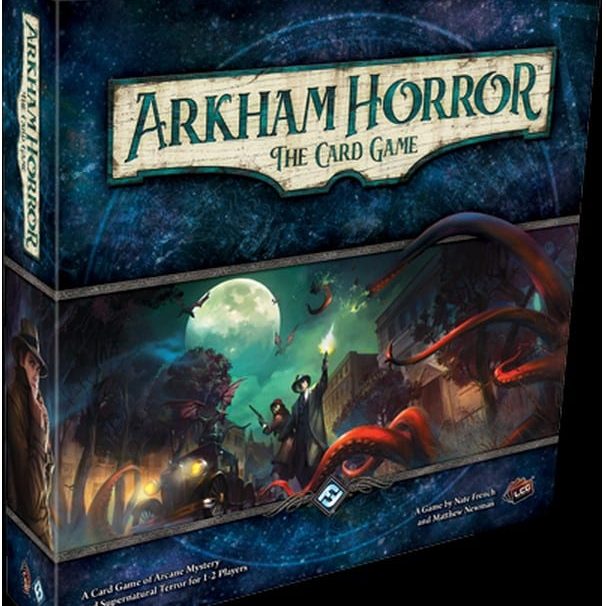 I’ve been into Living Card Games (LCGs) since Fantasy Flight released Lord of the Rings: The Card Game years ago. For even longer I’ve been a fan of trading card games, dating way back into my Yu-Gi-Oh! and Pokemon days as a kid. The thing I like about LCGs versus trading card games is probably the same thing many other players like the most: the fact that there’s no real sense of collecting to it. I like the ability to pick up a core box for an LCG and get the same thing you’d get if you picked up the same box. When expansions release I have the same opportunity to pick up “heavy hitter” or significant cards as you do, since it’s kept equal across the board. I don’t have to spend hundreds of dollars on single copies of a card or booster packs hoping to get high-dollar cards or certain ones I’m looking for.

That’s the format of the Living Card Game genre: a core set will release to get players into the game, and just about each month a small expansion will come out, adding more than just card value to the game. The expansions usually center around some sort of theme or story arc, which makes purchasing them much more worthwhile than grabbing packs. Now don’t get me wrong, drafting (where you buy a certain number of card packs and pass cards around the table while keeping certain ones to build a deck out of) with games like Magic: the Gathering can be a lot of fun, and a ton of people are into that sort of thing. A guy like myself, though, is more into the story of a game and genuinely just having fun with it. That’s why LCGs are more my speed.

In that same breath, however, it can become easy to get swamped in expansions if you don’t keep up. I picked up Android: Netrunner some time back and while I tried to keep up with it, I ended up falling behind in the expansions to the point where I felt like I was drowning. In a competitive game like that it’s important to stay on top of the meta and make your decks performing as high as possible. I tripped up and before I knew it there were tons of cards in the pool that I was unaware of, certain things I needed to get my decks back into top shape, and too much happening for me to catch up.

There’s a lot of diversity in the genre of LCGs, and that’s another thing I like about them. I still play Lord of the Rings: The Card Game because it’s a story-centric game. The expansions that release have cards in them to help players buff their decks, either by adding to certain strategies or following a theme style of play. The kicker, though, is the addition of new scenario cards that expand a story arc, keeping the game alive. This is the type of LCG that really grabs my interest.

What’s really gotten my attention lately is the recently-released Arkham Horror LCG that Fantasy Flight Games released last year. It follows the same pattern as the LotR LCG, only it’s under a different skin and has a unique play style. In the game players use Investigator decks to journey through different scenarios that are made up of Agendas and Acts. Each scenario has an objective, and the Acts & Agendas play to that objective in different ways. Players choose an Investigator and build a deck around them, using cards from the class(es) that the Investigator belongs to. Each Investigator has a set deck limit, and must include certain cards to finish out their deck. There are a lot of opportunities in deck building, and a bulk of the game’s strategy lies within.

Each Investigator has requirements when deck building.

Once you’ve got your deck building out of the way you will tackle the game’s scenarios. The core box comes with three different scenarios that make up one large campaign block. Each scenario can be played standalone, but the real fun comes when you string the scenarios together for campaign play, which allows you to discover a unique story arc, have the opportunity to upgrade your deck, and much more.

The thing I like about the Arkham Horror LCG is that it’s cooperative and the story is very engaging. Players work together to investigate different situations and if you play the campaign the Investigators take parts of the story with them. For example, in the game’s first scenario the Investigators are looking into strange murders that have been taking place locally. They start off in the Lead Investigator’s home and are working diligently until things start getting strange. Suddenly they’re locked inside of the study they’re in and must find a way out of the house as ghouls and all manner of terrifying situations begin to take hold. The game’s mechanics allow the Investigators to move throughout the house, gathering evidence that will help them find their way out of the nightmare that’s forming around them. Eventually the players are led to a room in the house where they meet a strange woman and a creature resembling a humanoid goat passing himself off as a priest. Once players have dealt with the danger (through investigation and combat, both of which are a lot of fun) they must make a decision. Depending on their decision (and if anyone died as a result of the things happening in the scenario) different things will happen. If you play the game in its campaign mode, you record certain things (like if you decided to listen to the mad woman or not) and gain experience. The experience is used to purchase new cards or upgrade current cards in your deck to prepare for the next scenario in the set. 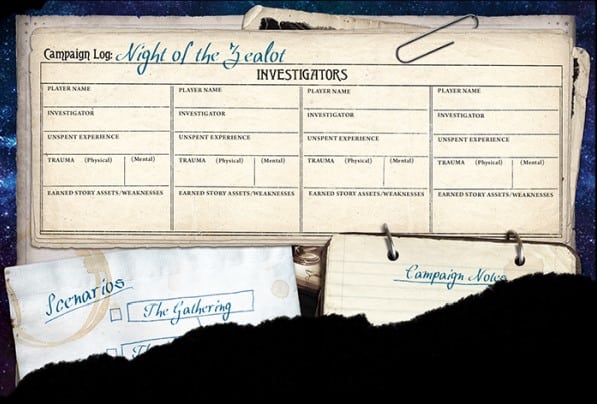 Keep track of your progress with campaign sheets.

The game is driven by story and not so much by “how much better your deck performs than mine”. The campaign mode is excellent, even when you play it several times over, and the ability to try out different Investigators keeps replayability high. Perhaps my favorite part to the game is the expansions. So far two different scenario packs have been released for the game: Curse of the Rougarou and Carnivale of Horrors. Each of these expansions comes with a set of scenarios, each of which include the Agendas and Acts needed to make it a full, unique storyline to play through. You can add these scenarios to your campaign game by making them side stories, and they can even reward you with assets or curse you with, well, a curse. I absolutely love this. It’s a way to experience the Lovecraft universe like never before, and honestly it’s become my favorite way to interact with it. The scenario packs are perfect for keeping up with the game, and they don’t make me feel like I’m drowning by offering a bunch of “must-have” cards to keep my decks out-performing others.

All of that aside, a deluxe expansion is coming soon for the Arkham Horror LCG. It’s called The Dunwich Legacy and it adds a ton of new cards to the game. Specifically, it adds a new campaign story and five new Investigators for players to sink their teeth into. Will it offer up brand new Investigator cards? Of course it will, but the focus is still on expanding the story. Arkham Horror: The Card Game doesn’t follow the scenario pack expansions like Lord of the Rings, where it adds new heroes and such along with story cards. This is where the game connects with me better. I want to experience the story and that’s exactly what this game gives me, and it’s terribly fitting. If you’ve not tried this out yet, you’re missing out.