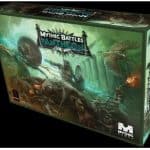 Mythic Games and Monolith Entertainment are happy to announce that the project they’ve been developing for over a year has now come to completion. Mythic Battles: Pantheon is now live on Kickstarter, where the two companies hope to not only fund the production of the game, but offer unique items to enhance the gaming experience as well. Mythic Battles: Pantheon features a redesign by original Mythic Battles designer Benoit Vogt and game industry veteran Léonidas Vesperini, innovative game play for two-four players in both scenarios and skirmishes, highly detailed miniatures in scaled human, god and titan sizes and artwork by legendary fantasy artists Stefan Kopinksi, Paolo Parente, Guillem H. Pongiluppi and Loic Muzy.

What’s the story with Mythic Battles: Pantheon? Here’s a description, right from the campaign page:

The Titans have escaped their prison in Tartarus to wreak havoc and devastation upon the world. Seeking revenge on their jailers, they attacked the home of the Gods – Mount Olympus itself! The battle was long and closely-fought, but in the end the Gods were victorious. Even so, the battle cost them dearly.

The surviving Gods are greatly weakened and have lost their immortality. The only way to regain this power is to assimilate the energy stones called Omphalos. The first to absorb enough of this energy will become the new ruler of the Gods, and can create a Pantheon in their own image.

The game features some amazing miniatures, like the ones pictured above. When you start a game of Mythic Battles: Pantheon, you’ll choose one of the available Gods and then build a warband based on them. You’ll spend recruitment points to build your warband of followers, which can consist of Gods, Heroes, Monsters, and Troops. Depending on the amount of players and type of campaign you decide to play, the recruitment point pool will change. Each character/miniature in the game possesses unique powers, so experimenting with different combinations can lead to very unique play styles and powerhouse warbands.

The campaign has been fully funded already, and it’s got 29 days still to go. For a pledge of $99 you get the game’s base set with 37 highly detailed figures, 13 Character Dashboards with adjustable stat ruler, 10 engraved dice, 2 two-sided foldable game boards representing four battlegrounds (Olympus, Styx, Tartarus and Minos Labyrinth), one scenario booklet and 15 Omphalos gems. The miniatures look amazing, and the game’s artwork is highly-detailed. There have already been tons of stretch goals met and unlocked, and the campaign is continuing to soar. This is a great time to get in on an amazing game that was shown off at Gen Con this year, so don’t miss out!