You are reading
Written Review – Catan: Explorers and Pirates 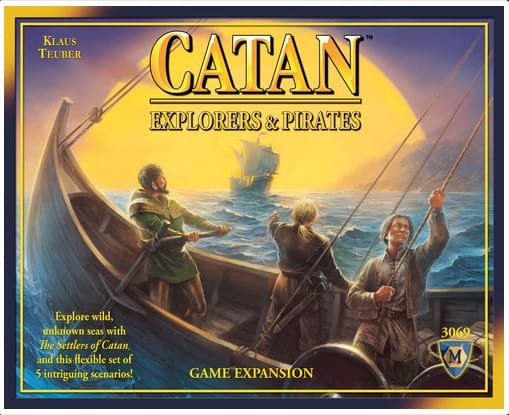 Hail intrepid seafarer! The council of Catan has sent you forth to seek out new islands, trade with the natives, and do battle with the nefarious pirates of Catan-ia!!  Victory points abound as do new strategies for conquest in Explorers and Pirates, an interesting expansion for Mayfair Games’ flagship (you see what I did there?) title, The Settlers of Catan.  You and your friends match wits to see who will be the bravest, richest, and possibly swarthiest seafarer of them all! But beware, nefarious pirates sail the seas between islands, and if you’re not stout enough you may just be taken beneath the waves!

What’s in the Cargo Hold?

Hexes and Other Game Components

Seafaring, Exploring, and All the Other Stuff You Couldn’t Do Till Now

The game itself is a very interesting twist on normal Catan that is broken down into 4 separate scenarios, each of which introduces you to a new aspect of the ruleset the expansion provides.  This makes getting into the new material pretty easy, as the core mechanics of Catan still exist in this expansion.  Each of the four scenarios has an increasingly large map as well, which is something you should keep in mind prior to purchasing this game, since the game board advances rapidly towards its ultimately mammoth size by the fourth scenario. Gameplay is broken down into production, trade and build, and movement phases.  With the exception of the movement phase, this plays very similarly to normal Catan.  Each player rolls the production dice and obtains the resulting resources from the resource pool, using them to build settlements, settlers, ships, harbors, or crew members, and they can then trade with other players of the bank for gold or resources (there are no Ports in this expansion, and all trading is done at a 3:1 ratio).  After the trading phase is done, players may move their ships, pick up Spice, or Fish Hauls, and discover new hexes on the map.  Every time a new hex is turned over the player who discovered it gets a resource card that matches what the tile would produce (brick, wood, ore or wool), or 2 Gold if it is a spice, Pirate Lair, or Fish Haul hex. Victory Points are awarded for trading the most spice, catching the most fish, raiding the most pirates (these replace the longest road and biggest army awards) as well as via the traditional methods of building Settlements, which are worth one victory point, or Harbors which replace Cities and are worth 2.

Let me just start this off by saying, I absolutely LOVE this expansion.  I’m not the biggest fan of normal Catan for a number of reasons, not the least of which is, if you get hosed on your initial placement, or just don’t get the rolls you need during the game Catan can turn into a boring grind of constantly passing, or hoping that someone will have mercy on you, and trade you the resources you so desperately need.  Both of these problems are addressed expertly with the addition of one simple mechanic,  Gold.  Gold can be used to purchase any resource from the bank at a 2:1 ratio, and if you happen to roll something that gets you nothing, you get 1 Gold instead.  This makes those long hauls of  poor rolls something that is not so devastating to your overall experience of the game, and takes a bit of the luck element out of play, which is something I’m always a fan off.

So, the game board.  Holy cow.  It gets big, and I don’t mean my waistline after an all-you-care-to-eat pizza buffet big, we’re talking 500 pound driving a scooter around Walmart big.  My table is a normal sized dinner table for 4 people, and I could barely fit the full game board on it.  I simultaneously love and hate this.  Let me tell you why.  First of all, the giant board is super cool to look at, and it keeps the exploration aspect of the game in play for a long time and that’s great, because its one of the most fun parts of this expansion.  It’s well put together, and holds up about as well as you would imagine a board made up of about 30 pieces should hold up to pieces being constantly moved and flipped and jostled during play.  The downside to this giant board, beyond the obvious concern of space however, is that its quite complex to put together, and its VERY easy to mess up during the initial setup of the game, which means, halfway through exploring the board, you’re going to realize that you’ve misread the setup instructions, and you’re going to have to move around pieces you’ve already explored, accidentally giving someone a slight advantage, or simply just interrupting play and forcing you to take the board partially apart, and  put it back together again, which can be a real hassle.

Sugar and Spice, the Natives are Nice!
The spice tiles add a really interesting mechanic, in that, you don’t just get Victory Points for picking them up and delivering them, you also get special boosts that are unique to each tile.  To pick up spice, you have to leave a crew member behind, and they stay with the natives for the remainder of the game, each spice tile has a number of spice hexes equal to the number of players in the game which can be picked up by your boats, so you can grab that special boost just for yourself.  The boosts range from making it easier to chase off the pirate (more on that colossal jerk later), to getting additional movement points for your boats, so they can travel further each turn, so it can be in your best interests to grab up all the spice from one location, so as to screw your fellow explorers out of some pretty nice bonuses.  Also, being the best spice trader has a Victory Point bonus associated with it.
YARRR, Here There Be Pirates!
Pirate Lairs are a pretty cool addition, since very often, taking them over is a community effort.  When you first come across one, you need to place three Crew Members on it to take it over, at which point, you can build Cities, Harbors, and Roads on it, just as you would a normal tile.  However, each boat only carries 2 crew members, so if someone turns one over, and you want in on the haul, its pretty easy to throw a crew member onto a ship and get your greasy fingers into somebody else’s work.  There are benefits to doing this, since, as soon as a Pirate Lair is overtaken, everyone involved in the assault gets two Gold, and moves one point up the Pirate Hunter mission track.  There are benefits to having multiple crew members involved in an assault as well, since there are “Heroes” of each assault.  Any player involved in the assault gets to roll one die and add 1 per crew member involved, the swarthiest buccaneer who has the highest roll gets an additional 1 point on the Pirate Hunter track, and everyone sacrifices 1 crew member.  Once you place a Town or Harbor on a Pirate Lair, if its number is rolled, you collect 2 Gold, as opposed to a resource card, and since 2 Gold can buy you any resource you like, owning a Pirate Lair or two is almost always a good idea.

So apparently the council of Catan is big on fish.  Don’t ask me why, I’m not the one writing the lore, but I swear, its the truth.  So, sometimes, while you’re out exploring, you’ll find shoals that are just teeming with fish.  How does this benefit me you ask?  Well, put a rapala on your line, and while you’re tying the knot I’ll tell you.  Once per turn you can roll a die to populate a Fish Shoal. If you roll the number associated with that shoal, you place a Fish Haul token in the center of the Fish Shoal, and hopefully, you have boats close enough nearby to pick them up.  Picking up fish, and delivering them to the council hex on the main island will get you Victory Points, and just like for the spice and pirate missions, having the best score on the Fish for Catan mission board will net you some serious VP gains when the points are tabulated at the end of the game.
I Drink and I Steal Things
Ah, the Pirate.  The Pirate is this expansions way of letting you be even more of a jerk than you would normally be with the Robber.  Allow me to explain:  the Robber hits you once, the Pirate blocks your ships from moving unless you’re willing to pay one Gold per ship for the privilege of moving through the hex he inhabits, and similarly to the Robber, takes one resource from your hand.  This can be devastating if you’re in the middle of a close game, and all you need to do is drop off some spice, or a nice fish haul, and you’re the winner, but you just happen to be Gold poor at the moment (I guess you would just be poor).  I’ve taken to imagining the Pirate as a smugger than usual Peter Dinklage who takes great joy in divesting me of my hard earned coin, and has an especially hearty laugh when he gets to hit me twice, or Lords of Catan forbid, three times in a single turn.  You can drive the Pirate away if you move your ships adjacent to the connecting lines of his hex.  Each ship counts for one die, and you need to roll a six.  Should you accomplish this, you remove your opponents Pirate Ship, and put your own smug self assured rapscallion in its place. 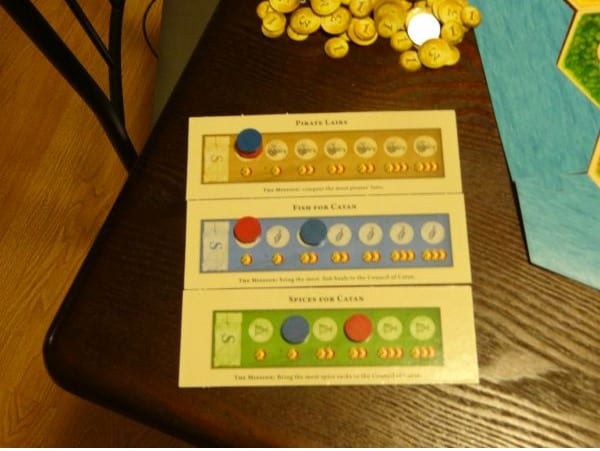 I really enjoyed this expansion.  It takes all of the things I really don’t care for about Catan;  it’s static nature, and the possibility you can get totally screwed for a whole game because of bad die rolls, and it replaces them with mechanics that are easy to learn, and make for a fun game of discovery.  You really can’t play this like a normal game of Catan. I tried, and I lost.  Using each of the mechanics intelligently, and at the right time, is key to victory, and I have really had a blast playing it.  If you’re a purist of Catan game play, this expansion might not be for you, but if you’re willing to give it a chance, its a really great twist on a classic game that you’ll love playing on your hopefully oversized gaming table.
Facebook Twitter Google+ LinkedIn Pinterest Tumblr
Previous article Written Review – Why First?
Next article Interview with Chris Birch from Modiphius Entertainment
Board Games