You are reading
Written Review – Why First?

We all want first place, that’s why we play competitive games, right? AEG believes that once in a while, being in second place is best. In Why First?, you must play strategically to NOT be in the first place, but the second. Play cards on yourself and other players to manipulate the race in this small game that will challenge the way you think about winning!

Why First? Comes in a small box and contains the following:

The game also indicates that you’ll need pen and paper for score keeping, but does not come with them. We used paper and phones during our plays. 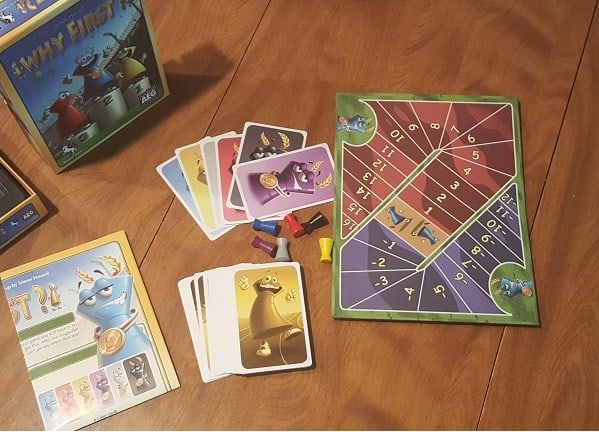 Place the game board in the middle of the table, and give each player a color card and the matching figure. In a 2 player game, there is an imaginary 3rd player named “Leo”, put this card/figure to the side for now.

Each game has 5 stages, the start of which players place their figures on the starting space in the center of the game board. Shuffle all the cards, and draw 5 for each player. (In a 2 player game, place 4 cards facedown in front of Leo) After all player cards have been played, the stage ends and the next begins. The game ends at the end of the 5th stage.

Each player chooses a card to play that round, and another player may count down “3…2..1…NOW!”. Players must at this time place their card face down in front of any player including themselves. (In a 2 player game, Leo always reveals the topmost card and only plays on himself). Reveal all cards in front of you, and move your figure forward on the board the number of spaces indicated on the cards played on you, or backwards if they are negative. Figures cannot go beyond 16 or -12. Play the first 4 rounds this way. In the 5th, you are only allowed to play your card on yourself. Once everyone has moved, move to scoring. 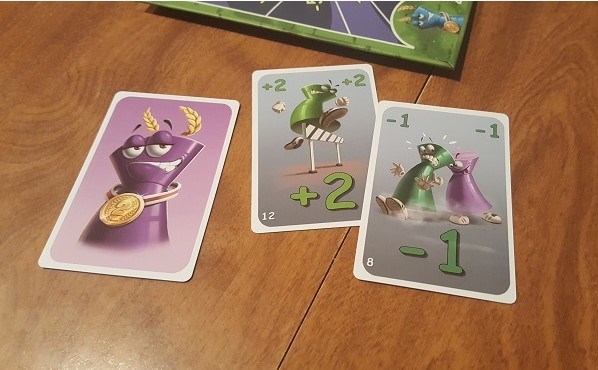 Two cards have been played on Purple – player totals these together to determine how they move along the board. In this case, Purple will move forward 1 space (2-1=1)

Scoring occurs between EACH stage. Find the space that is second farthest on the track. All figures in that space receive points equal to that space’s number, and yes, they can be negative. Continue this for each stage, and at the end of the game, total all the scores together. The player with the second highest score over all 5 rounds is the winner! 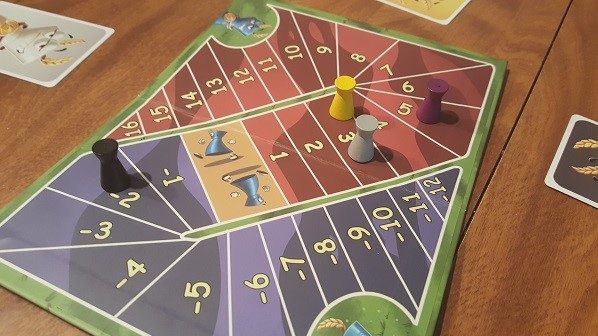 Taking A “Second” Look At Winning

Why First? was certainly an interesting game with a new approach to how you think about winning. First place isn’t everything, right?

The game is pretty straightforward…don’t be first, and don’t be last, aim for 2nd place, and find a balance to stay there until the end of the game. I did like having an ultimate goal to keep my focus on, but I did find it difficult to form a real strategy on. Especially if playing a 2 player game and Leo is in the mix. Sometimes he is just an extra factor to remember and then to be ignored. But, Leo did win a few games against us, so he can’t be fully discredited.

I think this game is best at 4-5 as the targeting is a bit more widespread and you’re not as likely to have a major gang-up on any one person, at least not until the end where players will scramble to sabotage whoever is in the (second) lead. I disliked the game at 2 players, to be honest. We do have friends that come over to play games, but most likely this game would be played with 2 players in my house, so that is a knock for this one. I don’t like the 3rd imaginary player, even though it is a necessary evil for 2 players. That is just my personal preference, however, and it does play well with 3+ players.

It is definitely replayable – it won’t go the same any future times, but as many screw-your-neighbor and sabotage games, individuals can get really far ahead or behind to where it seems almost hopeless, and players get ganged up on. If these kind of games don’t phase you, then you might really enjoy pulling this game off the shelf for a quick race.

Everyone ganging up on Black to force them forward to first!

Personally, I don’t see Why First?! hitting my table frequently, mostly because we like themed games more lately, but it isn’t bad. The mechanics are there, but there is definitely a wild-card aspect with the imaginary third player in a 2 player game, as well as leaving your own fate in the hands of other players’. Why First?! retails for $14.99, and isn’t a bad deal for that price, especially if you see yourself playing this semi-frequently.