You are reading
The Five Play Review: Descent: Journeys in the Dark: Road to Legend (Second Edition) 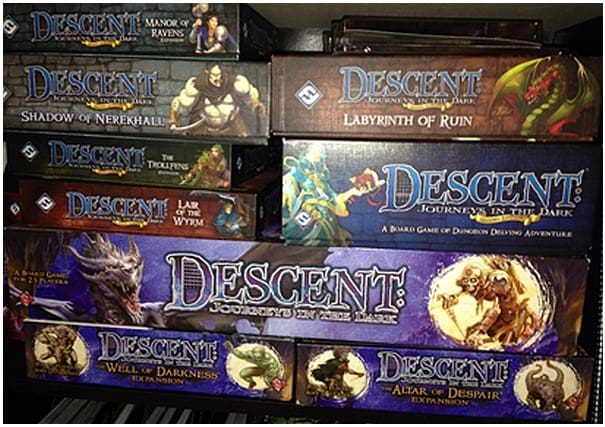 A couple of years ago, I played a campaign of scenarios for a game that was one player verses many.  Of course as it was my game, it fell on me to be the one playing against the rest.  The Overlord, Dracula or Mister X – The one player against a group of players.  You have this in almost every RPG game out there and every single one advises the DM/GM that it is not “you against them – except in these games it is!  To make a long story short, it was a horrible experience and it solidified my complete and utter dislike for that type of genre. That game was Descent (Manor of Ravens expansion) and because of that experience, Descent has been sitting in my game collection gathering dust.  The cooperative packs were a nice touch, but they used only a fraction of my collection and didn’t deliver a true dungeon crawl experience that I desired. To be quite honest, I was ready to sell the whole collection this past Gencon and was looking for the price of the old 1st Edition Road of Legend to sell when the new edition of Road to Legend popped up in my BGG search.

A free computer app using all my Descent collection in a cooperative experience – this was intriguing and I downloaded the app, read the rules and got to playing around with the app’s features – the thought of selling my entire collection forgotten.  The first trial run was with a friend of mine around Gencon and then I played a couple of additional times solo to get enough games for this review. 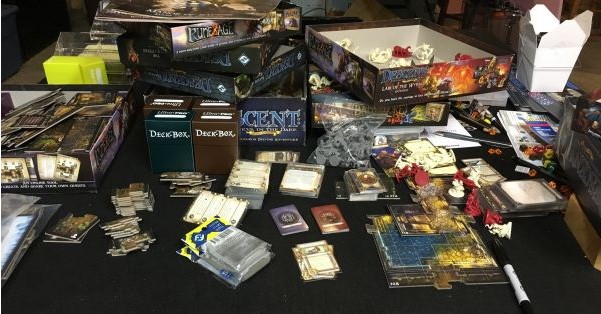 My Descent Collection – before the first game with the app, I needed to sort everything I owned.

The components used are those found in the original second edition Descent games and a free downloadable computer app (I’ve personally used it on iOS and Android). All of Descent’s components are functional and high quality and the app is easy to use and very polished. Be forewarned – the first edition stuff, even with the second edition upgrade kit is not compatible.  For the most part, you use everything that isn’t Overlord specific (Hero cards, Merchant decks and the like).  The more expansions and Character/Lieutenant packs you own, the more the app has to pull from, which gives a larger and more varied experience. 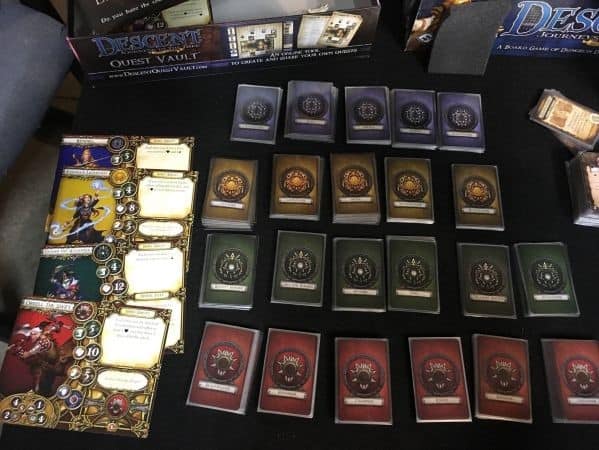 The Hero choices for class for each of the archetypes.

Gameplay, for the most part, is very similar to Descent so I am only going to cover what is different using this app.  The first and foremost is that the app is used to keep track of the party’s experience, gold and fame (a numerical value that explains how well-known and well-liked the party is – nice when purchasing equipment from cities).  Each campaign has a main quest with a timer (in number of weeks) that will force players to head there in order to advance the story.  For example in the campaign:  The Rise of All Goblins the first main quest is 4 weeks away (aka 4 campaign turns) allowing players to explore the countryside for side quests to gain money, fame and experience as well as heading to the city to upgrade equipment before moving to complete the main goal.

Once a quest is chosen (be it side quest or main quest), the computer app informs you what tiles will be needed for the quest. Since one has completed the collection tab with all the expansions one has, the computer app can draw from any of them.  I believe that there is a lot of room to expand as many of the tiles above 40 haven’t been used as of this writing so it looks like not all expansions have been included.

Heroes get two actions just like in normal Descent.  Instead of all heroes taking a turn before the monsters, a single monster group activates after each hero turn. This is more in line with the new Star Wars Imperial Assault which many people are calling “Descent 3rd Edition. This provides a lot of tension and tactical play and keeps the heroes from just quickly dispatching the monsters before they can retaliate.  Combat and movement are done outside of the app, but the search action, the interact action or open door require one to use the app to discover what is there (perhaps completing a skill check).  Combat is really no different than the original game, but since monsters are activated by the app. the players can’t be sure which group will go and what their AI will be. For the AI of the monsters, players go through a list of action commands until two actions have been completed (or the list has been repeated twice) for each monster in the group. Just like in original Descent, most monsters can only attack a single time in their turn.  The app commands are easy to learn and most often the monster group is given some kind of special bonus for activating – as if the overlord had played a card.

The heroes are assaulted by two monster groups.

All quests have a definite stopping point – either the heroes succeed in their mission or the morale of the characters is forced below 0 making the characters flee the quest (the morale of the heroes starts normally equal to the number of heroes and is decreased by 1 for each hero knocked out). A town can return morale to its maximum so you might have to skip a week of side questing if you need to replenish your morale.

If the heroes don’t succeed in the final main quest, they most likely will lose the whole campaign (not unlike all of the campaigns for normal Descent play). Honestly since I am 0 for 3 on the final boss mission for Rise of All Goblins, I can’t truly explain any of the win conditions! 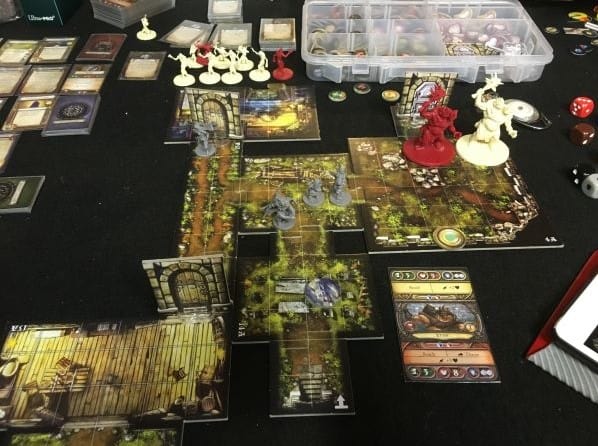 Two Ettins appear at the locked door while the heroes look to explore two doors for a key.

My thoughts – What do I think?

I will warn you. The game is brutal and quite unforgiving so be prepared to move fast! Minor and Major peril (like the cards found in the cooperative missions) can really hurt you if you don’t keep moving. Most times I thought I was moving fast enough just to be overwhelmed by peril event after peril event.  It truly feels like the app is out to get you.  Some people think that is refreshing, but in my experience can wear thin after multiple plays. Also, as far as I can tell, the whole campaign teeters on that single final mission so a couple of good/bad die rolls can really make the game go south quickly.  Like I said, you have been warned.

It you own second edition of Descent and any of the Descent expansions, I can’t recommend this app and play style enough.  It currently comes with two free campaigns and I can see them expanding this in the future.  I would even pay a nominal fee for additional campaigns since it gives Descent a dungeon crawl feel without forcing a player to be the bad guys! Granted I have only played this once with others, but as a solo game – it is top notch and well designed.  Since playing it, I have purchased all the box sets in print and two lieutenant packs.  I can’t wait to expand my collection!