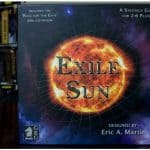 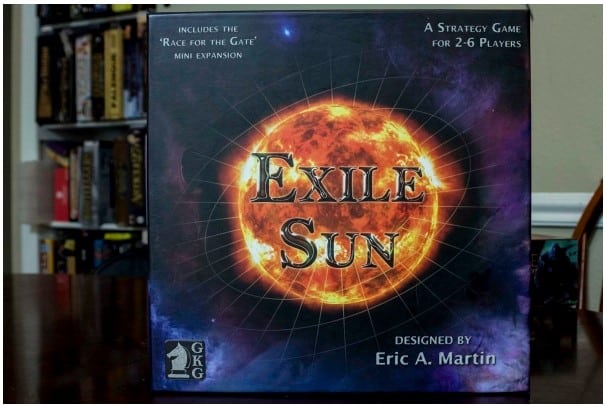 Outcasts, criminals, pariahs, and adventurers. Exiles all. Cast away from Earth, the colonies around the Exile Sun now vie for power in a harsh, unforgiving space far from home. In Eric Martin’s game of space battles, players must outmaneuver one another, use resources wisely, and ultimately rise to the top of the heap through scoring victory points. Published by Game Knight Games and distributed by Game Salute, Exile Sun toys with strategy conflict and battle mechanics to bring galactic strife to the gaming table. 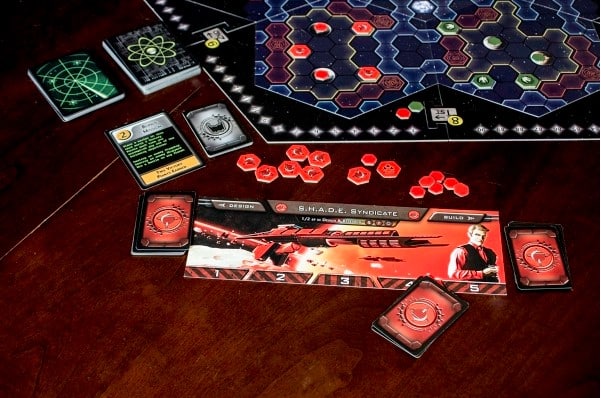 For those who get the Race for the Gate mini expansion, you also get agenda based point victory condition rules, and a decent set of ship minis for each colony.

The Sun Tile is placed in the center of the play area, with the rest of the board being constructed around it. It is easier to put together the Frame Tiles before handling the rest of set up. Make sure that the frame is put together so that the point tracker is consistent, with each numerical value in its proper place.  The black pawn should be placed on the sun tile’s “start” space.

In reach of all players, place the Strike Craft ship cards, Technology cards, Agenda Cards, and the Bonus Mission card. Draw four cards from the Agenda deck and place them face up. These are public Agendas that all players may attempt to complete.

Select a first player by any means you prefer. Starting with this player and going clockwise around the play area, each player should choose a Colony Card and collect the matching pawn, ship cards, fleet tokens or miniatures, and colony markers.

When all players have selected a Colony, continue in a clockwise fashion in choosing a Map Tile to place within the frame.  The selected system is the player’s home system, and the player should place a colony marker on each home planet, and near the start of the victory point tracker. Any map tiles not selected should be placed within the frame with the reverse side face up, providing no home planets for the duration of play. This is open space, but is not controlled by any colony. 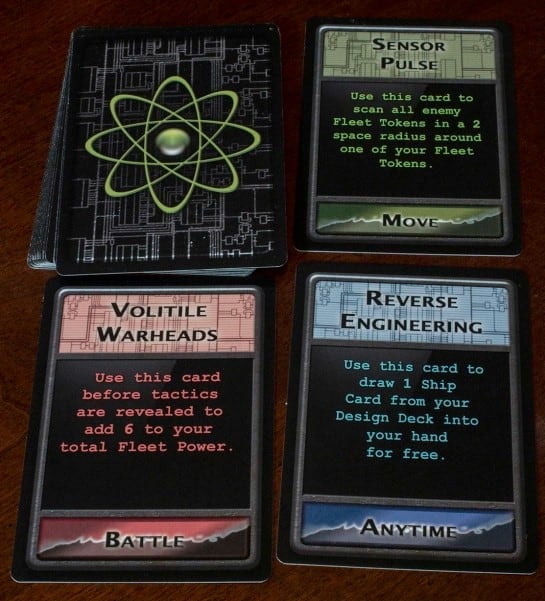 Each player then places 1 ‘Light,’ 1 ‘Medium’ and 1 ‘Shipyard’ token or mini within his Home System. If a player wishes, he may place decoy tokens or miniatures within the Home System. These appear to be the same as the other ships, but have no identifiers on the reverse (hidden) side. If no decoys are placed at this time, it will cost movement to place them during game play.

The play area is now set and the game may begin.

The first thing to happen in every game is a supply event. At this time, players choose turn order. Selection occurs in the reverse order of setup, starting with whoever was last to set up. After this first supply event, order will be determined based on ((XXXX)).

Following the Turn Order Track, each player takes their turn. A turn consists of using allotted Move Actions and moving the Timer Pawn, the black pawn on the Sun tile.

The number of moves a player has each turn is indicated on the Colony Control card. Some have more than others. Move actions may be used to:

Movement of ship tokens is dependant upon the type of space being entered. Normal, uncontested space has no notable outline, and ships may move through one space per move action. Trade Routes are outlined in blue, and players play move 2 spaces for each move action. Military Zones are outlined in yellow, and is considered a Trade Route for the player who controls the home system, while everyone else treats it as Normal space. Asteroid Fields are outlined in brown, and require 2 move actions for a ship to enter. Gates are unique, in that a token or mini can move between any two Gates for free, and may leave any Gate for free. A token or mini may not stay on a Gate, however.

When two fleets occupy the same space, one of the controlling players may start a Battle. Move actions may not be applied to fleets engaged in Battle. Fleets are free to continue movement at the end of the following Battle event, once one of the ship tokens or minis has been removed. Battle Events are triggered by the Timer Pawn moving to the Battle space on the Time Track. Ships engaged in Battle are locked in Battle until the Timer Pawn reaches the next Battle space.

Battles are resolved through use of Ship Cards. A player is required to use a number of ship cards equal to the number of ships shown on the reverse side of the token or mini. Players may use Ship Cards from their hand and the Strike Card Deck. Strike Cards may be used for Battles by any engaged player and accrue no cost for use. The only requirement is that at least one card in the Battle must come from the player’s hand, if available.

Players must select their ship cards for the Battle before the sizes of the fleets are    revealed. If a Decoy is revealed, no Battle occurs. Strike Cards should only be selected for use after Ship Cards from the hand have been selected. This prevents prematurely revealing the size of the engaged force

Once Ship cards are selected, they should be placed below the engaged players’ Colony cards. Ship cards should not be rearranged during a Battle.

Each player counts the total Fleet Power from the ships.  This includes the offensive and defense potential of each ship engaged. Fleet Power is determined by counting the circles on a ship card, as well as the pluses and minuses pictured. This Fleet Power is allocated on a Control Card. There are ten columns which may be used, but each column may only have 8 points allocated. Once engaged players have allocated their points, the Control Cards are revealed. Attack and Defense values are compared to see how much damage each ship takes. For each point of damage on a ship, one circle is covered with a Colony Marker. If a player has accidentally allocated too many points, the opponent selects where to remove the excess points.

When all circles on a ship card are covered, the ship is destroyed. After all damage has been assigned, any ship that has been destroyed is removed from the Battle. Once all destroyed cards are removed, a new round of Battle begins, proceeding in the same way as the last. Once all ships are removed from one side or the other, the Battle is over and a victor is determined.

A player may attempt to surrender. In such a case, any Flagship or Shipyard the player has engaged is destroyed. All remaining ships go to the bottom of the Build Deck. The winner is granted success on any Agenda or Bonus Mission which would have succeeded in the case of a standard victory.

Any fleets that are destroyed during a Battle are removed at the end of the Battle. Any player who has won a battle on a Planet or who has destroyed a Flagship or Shipyard places a Colony marker on the Bonus Mission card. Players may also claim Agenda cards by placing a Colony Marker on the appropriate card. Only one marker per player may be played on a public Agenda. The Bonus Mission may have any number of such markers.

Following a Battle Event, once all Battles are resolved, scoring occurs. Points are allocated based on various conditions, such as claiming a public Agenda, maintaining or gaining control of a Home Planet, or returning a Flagship to the player’s hand. After scoring, all private Agendas are discarded, the Bonus Mission Card is cleared of Colony Markers, and public Agendas that were claimed are discarded and replaced. 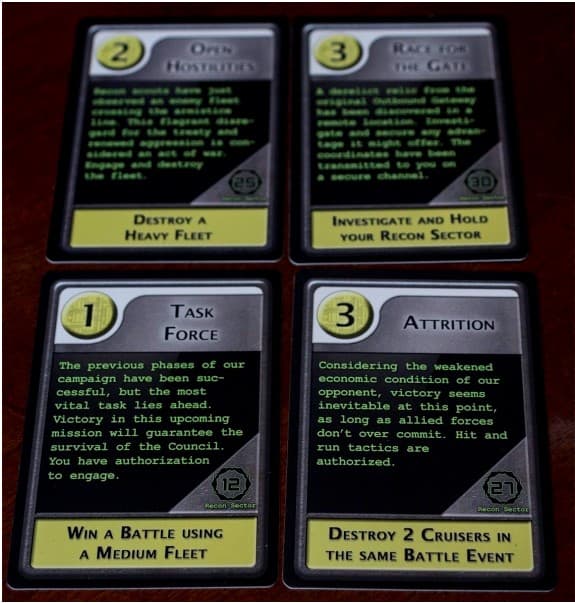 The game ends when a certain number of cycles have elapsed. A single cycle is all that is required when learning the game. Long games run four cycles, while shorter games sit somewhere between long and learning.

Exile Sun is adequate. It is not the easiest strategy game to learn, nor is it the most difficult. It is also not the easiest or hardest to teach. It rests somewhere in the middle of the spectrum. As strategy games go, a player’s mileage may vary when it comes to the learning curve. It most definitely is a game that needs to be learned through play.

Game play is mostly satisfying. I have no significant complaints about the game, save that it is not one I can get most of my friends to play. The unique aspects, such as hidden fleet power or the use of a Control Card to alter tactics during a battle, are appealing. I’m not sure this makes up for the engagement seeming to drag on a bit, but I am also not sure this feeling didn’t come from a lack of enthusiasm on the part of the other players. Perhaps players who are more excited about the dynamics of this game will enhance that experience.

I really like the way the game looks, too. The board design appeals to me, and even though the tokens and minis are simple, they look good on the board. I like the design of the Colony Cards, particularly the color schemes. Even the ship cards, which are incredibly simple in design, work well for the theme. 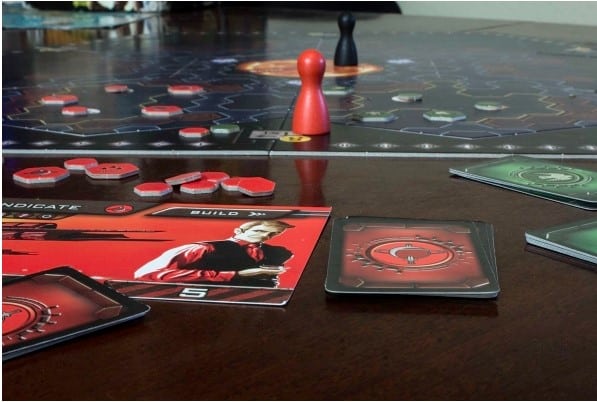 My biggest complaint about the game is that it seems to just come down to a slugfest between fleets. Even with the various Agendas and Bonus Missions, every game came down to who could rush to their opponent and kick in some teeth first. The game would greatly benefit from a more dynamic set of victory conditions, thus appealing to various styles of play.

Ultimately, I want to like this game. I want to play it. I won’t be removing it from my collection, and will continue to try to find people with whom to play Exile Sun. I think it has great potential, but for now it is going to simply occupy space on my game shelf. Like so many strategy games, Exile Sun is great for players who are enthusiastic about the idea of strategy gaming as much as the actual play, but is not a game for casual players or those who tend to stay away from the strategy genre.