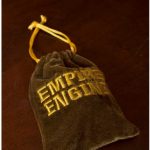 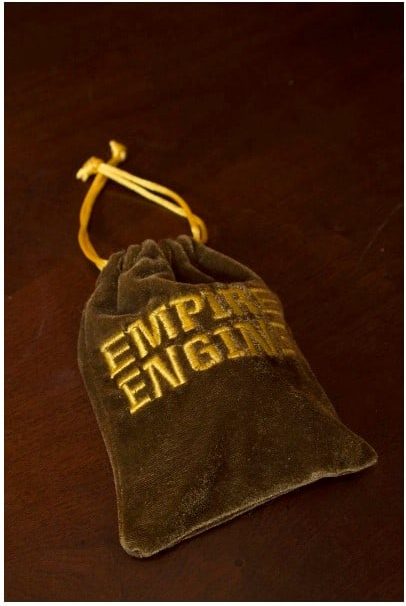 There is a truism in gaming that you can sometimes see the gears turning when a player thinks about his next move. AEG makes that a reality in Marling and Dunston’s Empire Engine. Players use gears to run their engine, build their empire, and rule over their opponents. Will your engine rev up and run? Or will it stall out while your opponents leave you in their dust?

Empire Engine is a mini game, so it doesn’t take long to set up. Each player takes one Right Engine card, one Left Engine card, one 1 Gear card, and one 2 Gear card. Place the round tracker card between the players, with the black cube on round 1. Finally, each player receives one red (soldier) cube and one yellow (goods) cube. 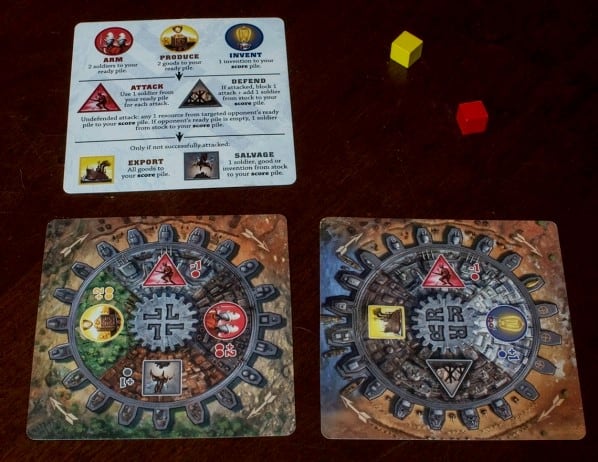 Once all Engine cards are on the table, players flip them face up. It is important to flip in a way that the desired effect is at the top of the Engine card. With the Engine cards revealed, resolve each effect in order as listed on the Reference card. It should be noted that while all players have the same set of effects, the Left and Right Engine cards have slightly different combinations of optional effects.

The effects available on the Engine cards allow a player to gather soldiers, attack other players’ supplies, defend their own supplies, produce goods, and generally build up the Empire being built.

Through the course of the game, players will transfer cubes representing goods, soldiers, and inventions into their respective score piles. Until the resources are safely stowed away in the score pile, they are vulnerable to attack by other players. 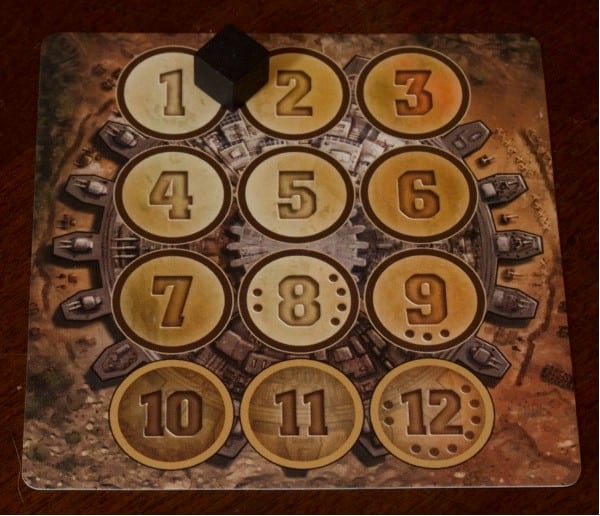 The Rise and Fall of Empires

As filler games go, Empire Engine is not bad. It’s easy to transport, easy to set up, and fairly easy to play. It won’t hit my table very often, but when it does there’s no doubt it will keep players happily occupied until the main event starts. It is novel in its approach, and because of that players will likely give it a few plays. As with any empire, however, it goes into decline over time. A little hunting can find the game at a reasonable price, allowing players to get their money’s worth. If you can find it within a reasonable budget, it’s not a bad addition to the game collection.