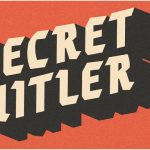 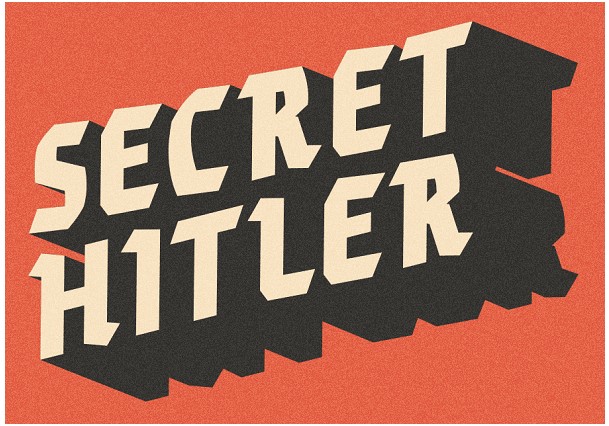 Designed by Max Temkin, Mike Boxleiter, and Tommy Maranges and illustrated by Mackenzie Schubert, Secret Hitler is another entry into the increasingly crowded hidden-role game genre. However, this game attempts to exploit a more real-world, and perhaps controversial theme than other, more conventional genre offerings. Kickstarted in December 2015 (and fulfilling now), Secret Hitler is about the rise of fascism in 1930’s Germany, but is also, at its core, a (timely) critique of ideology run amok and political processes more broadly.

What’s in the Box? 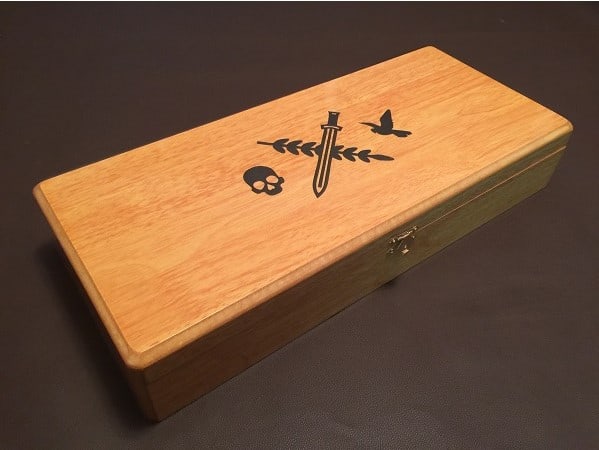 The version of Secret Hitler that I’m reviewing is the deluxe Kickstarter version. My understanding is that the only difference between this version and the upcoming retail version is the custom, deluxe wooden case that houses the retail version of the game. The box, while absolutely beautiful, is not a game component or necessary unless you’re a completionist. In the box, you’ll find:

The retail version inside.

Like most hidden-role games, Secret Hitler has a slightly different set-up depending on the number of players. To begin, select the Fascist game board that corresponds to the number of total players in the game (5-6, 7-8, or 9-10). The players are then split into teams, Liberal and Fascist. The distribution of these teams ranges from 3 Liberals, 1 Fascist, and Hitler in a 5 player game to 6 Liberals, 3 Fascists, and Hitler in a 10 player game. One player will place a Secret Role card and a matching Party Membership card into one envelope for each player, shuffles the envelopes, and randomly distributes the dossiers to the group. When secretly checked, these envelopes will indicate to players if they are a Liberal, a Fascist, or the Secret Hitler. It is the job of the Fascists to coordinate in order to create distrust and, eventually, install their Secret Hitler as Chancellor. The Liberals, on the other hand, must identify, and possibly eliminate (i.e. assassinate), the Secret Hitler before his (or her) rise to power is complete. While the Liberal team always has a majority, these players have the disadvantage of limited information – pretty standard for any hidden-role game.

As convention dictates, players begin the game by receiving and secretly checking their roles then closing their eyes. One player gives verbal directions for the Fascists to open their eyes and reveal themselves to one another (though there is a promised app that will make this easier). Whether Secret Hitler knows who the other Fascists are depends on the number of players. With 7 or more, Secret Hitler keeps his eyes closed, but puts his thumb up so the Fascists can see who he is. With 5 or 6, Hitler and the Fascists both open their eyes when prompted and are working in tandem with shared information. The Liberals always keep their eyes shut, and at the beginning of the game should have no information.

Each round of the game begins with the Election Phase, where the players elect a government comprised of the President and a Chancellor. The President position rotates clockwise through the group, and the President always nominates his Chancellor. In a 6+ player game, the previous government is always “term-limited” and cannot serve as Chancellor in the next round – however, once there are only five active players, this restriction is dropped from the President. No one may ever be Chancellor in consecutive rounds. After an eligible player is nominated to be Chancellor, the group votes “Ja!” (Yes) or “Nein!” (no) for that government, with a simple majority winning – ties are considered failed campaigns. If a government is not approved, the President moves to the next player and the Election Tracker moves forward one space.

If the government is approved, the President and Chancellor take office and the next phase, the Legislative Session, begins. The elected players will then work together to enact a law from a random deck. The President draws the top three tiles of the Policy tile deck and chooses one to secretly discard, passing the remaining two the the Chancellor, face down. The Chancellor then chooses one to secretly discard and one to enact. The enacted law is revealed to the group and placed on the appropriate track. If the government passes a Fascist law, all of the players are given a little bit of information and must try to figure out if they were betrayed by their government or simply unlucky in the draw. Only after the new policy is revealed can the President and Chancellor discuss what options they were given. This is the heart of the game, where people ask questions about what was drawn and discarded and try to do the mental calculus to determine who is lying and how many of which policies remain in the deck.

What makes Secret Hitler unique is the inclusion of government powers that come into play as more Fascist Policies are enacted. The government, whether Liberal of Fascist, can use these powers to their own ends. These powers include examining the top three cards of the Policy deck, investigating another player’s party card, a veto power, and the power to assassinate your political rivals. Like any board game, the objective is to win. How is that done? For the Liberal team to win, they must pass five Liberal Policies. Or, if they are able to identify the right player, use the Fascist policies to their advantage and assassinate the Secret Hitler. Conversely, the Fascists are trying to pass six fascist policies or elect Secret Hitler to the position of Chancellor, but only after after three Fascist policies have passed – making it possible to wrest power from the Liberals and establish a new, Fascist government.

The Policy Track game boards, set up for a 10 player game.

“If you win, you need not have to explain…”

This game could have been a disaster from a theme perspective, and while the art for the Fascist roles in the game are presented as dinosaurs, the game is actually respectful of the material in a way that is, frankly, surprising. It could’ve been a disrespectful romp that treats the rise of Nazi Germany as a gag to induce laughter in horrible people (as in the Temkin co-designed Cards Against Humanity). Instead, it is in reality a tense, dramatic game that feels somehow more serious than you expect without ever losing the fun. To make their point even more clear, the designers included, as part of the packaging, a historical comic called “The Not-So-Secret Origin of Not-So-Secret Hitler: Who He is and How He Came to Be,” which really puts the game into a whole new perspective.

But, for the most important question: is it actually fun? In a word, yes. However, like most games, this depends on the group. It is at its best with the full compliment of 10 players, but I have played it with every player count, and so far, it has been a hit. I picked up my Kickstarter copy at Gencon, so I have had some time to test it with different groups, and in every group, one quick game has always turned in to at least three. In a market crowded with hidden-role games, this one sticks out. It is good. Really good. However, it will not be for everyone. The theme can, understandably, be a huge turn-off to some, while others will bristle at the mere mention of hidden-role games in general. This game does not break the mold in such a way that it will create converts from those who loathe the genre in general.

However, for Just Another Hidden-Role Game, Secret Hitler is one of the finest games in the genre. It doesn’t play as many as Ultimate Werewolf and doesn’t have the slick, futuristic theme of The Resistance, but neither of those are really drawbacks. This game is elegant, dramatic, beautiful, and fun with any player count. I have had the opportunity to play it with several player groups, and it seems well balanced, with the Fascists having a slight edge in victories (12 Fascist victories in 21 play tests). It creates a sense of anxiety every turn, and the accusations are plentiful. Watching a Liberal player break down as they decide whether to play a Fascist policy so they can unlock the assassination power and try to kill the Secret Hitler is a sight to behold. And, there is a sense of accomplishment in this game when the Liberals are able to identify the Fascists and deny them the opportunity to elect Secret Hitler to the Chancellor position. You feel as though there is something on the line, something I’ve rarely felt with The Resistance. The replayability is as high as any hidden-role game, but will have a ceiling in any group. The more you play with a consistent group of people, the more you learn to recognize their tendencies when they play in one role or another. It is a party game at heart, and works well as a break from Codenames, Say Anything, Spyfall, Cards Against Humanity, and other standard party fare.

Is this a Must Own Game? I’m not sure. The Resistance was a Werewolf-Killer for me and my play groups, particularly with the expansions or in its re-themed The Resistance: Avalon form. So is this a Resistance-Killer? I’m not entirely sold on that. After discussing this with my play groups, some prefer Secret Hitler, some The Resistance. Personally, I’m keeping both in my collection. Secret Hitler definitely works best towards the higher-end of the player count, particularly 9 or 10, and just seems to work better than other similar games at that number. But it also features my least-favorite mechanic: player elimination. Eliminating players is vital to the game, so it definitely would not be better without it, but it always sucks to have to be the person who is sitting out. Luckily, games are frequently less than 20 minutes, so you’re never sitting long if you were assassinated and you were a Liberal and you told everyone that, but your Liberal colleague didn’t believe you, thought you were Hitler, and “accidentally” had you shot…

Additionally, there are other hidden-role games that might be as good or better for lower player counts. This game is still good with 5, and plays really fast at that number, but with that group size there might be better games – as always, your mileage may vary. Ultimately, while pretty great, this won’t be the game for everyone. The components are certainly better than any of its competitors, and the game is fun and very solid mechanically. If you like hidden-role games, I would highly recommend checking this one out. It is well worth it. If you don’t like those types of games, this absolutely won’t change your mind.