You are reading
Written Review – The Grand Austria Hotel 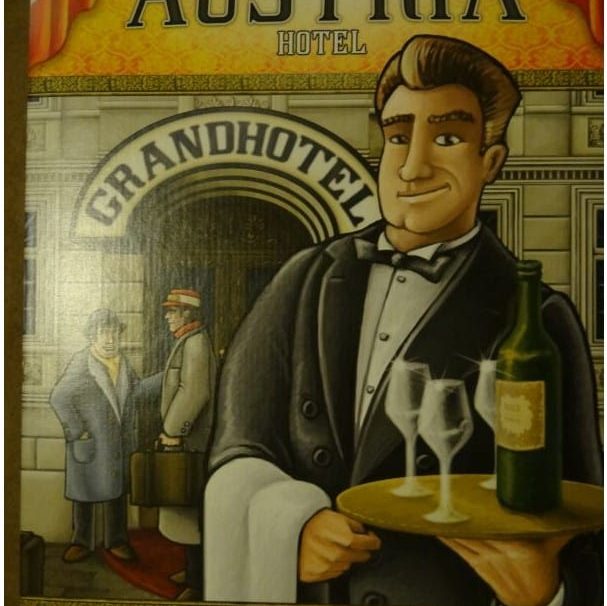 In the Mayfair games Grand Austria Hotel you play the role of an aspiring hotelier in a quest for fame, fortune, and imperial favor in early 20th century Austria.  You cater to royalty, artists, and visiting dignitaries as you attempt to turn your tiny hostel into the one and only “Grand Austria Hotel”.  Each guest has refined taste, and their orders must be filled to the letter before they will grace you with their presence. Your well-trained staff is at your command as you attempt to ensure each guests satisfaction, and perhaps even gain the favor of the emperor himself!  Are you up to the challenge of duking it out, cake after cake and strudel after strudel?  Do you have the fortitude to bear the burden of your guest’s horrifyingly overpacked luggage as you ascend a seemingly endless flights of stairs?

If your heart is true, then in the name of the emperor I beseech you!!

Get me a coffee, and two pieces of cake, I’ve had a long day. 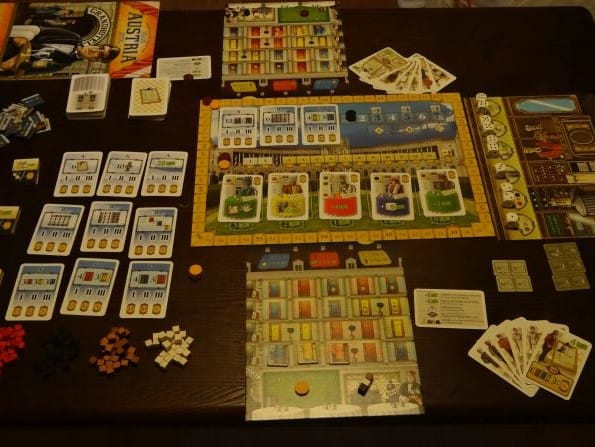 The game is divided into 7 rounds of play, and at the ends of round 3, 5, and 7 there is an “emperor” scoring (more on this later), with the final scoring happening at the end of the 7th round.  To begin, each player is provided with a coffee, a cake, and a strudel to fill guest orders as well as 10 krones (the name for currency used in the game) and a hand of 6 “staff” cards.  The dice are rolled (for a 2 player game, only ten are used) and each die is placed on the action board. The number of each die corresponds to an action which can be taken as follows:

Each player then chooses one set of action dice from the board, and takes the appropriate action.  In addition to the one action die that is taken, there are additional actions a player can take each turn. These include paying 1 krone to add 1 additional die of the chosen type to their total (this can only be done once per turn), placing a token on a politics card to gain its VP when the effects are met, tapping a staff card to gain its effect, and finally, move a guest whose order you have completed into an open room of the appropriate color.  Guests each have rewards associated with them that you earn when their orders are completed, such as playing a staff card for free, or at reduced cost, extra krones, or emperor points.  Placing a guest in a room will generally (though not always) also move you up the Victory Point track.

On turns 3, 5, and 7 you can take a penalty or a reward (or remain neutral) depending on where you are on the Emperor Track of the game board.  Three tiles are placed on the game board at the start of play which determine what these effects will be.  You can move up the Emperor Track by filling guests orders, taking a 4 for your action die, or utilizing special abilities from your staff cards.

At the beginning of play, three Politics cards are placed on the game board. Each one has different conditions which must be met to get the VP associated with the card.  Fulfilling the conditions on the card first will net you a total of 15 VP, second will get you 10, third will get you 5, and if you’re the unlucky sap who just couldn’t fill all your red rooms in time, you get a big fat goose egg.  Sorry about your luck.  The conditions for the cards vary and include things like having a total of 20 krones, filling all the rooms in your hotel of 1 color, or getting 10 Emperor Points.

A Gaming Table with a View of the Rhine

Since the advent of Settlers of Cataan, Euro-games have become increasingly popular worldwide.  Relatively simple, easy to grasp rulesets and short play times make these types of games very family friendly, and they’re a great intro to gaming for your friends who aren’t quite ready to sit down and play a game with a 70 page rulebook and a playtime of 6-8 hours.  That being said, a lot of Euro-style games are a little vanilla, lacking any real sense of setting or personality.  This is absolutely NOT the case with the grand Austria hotel. 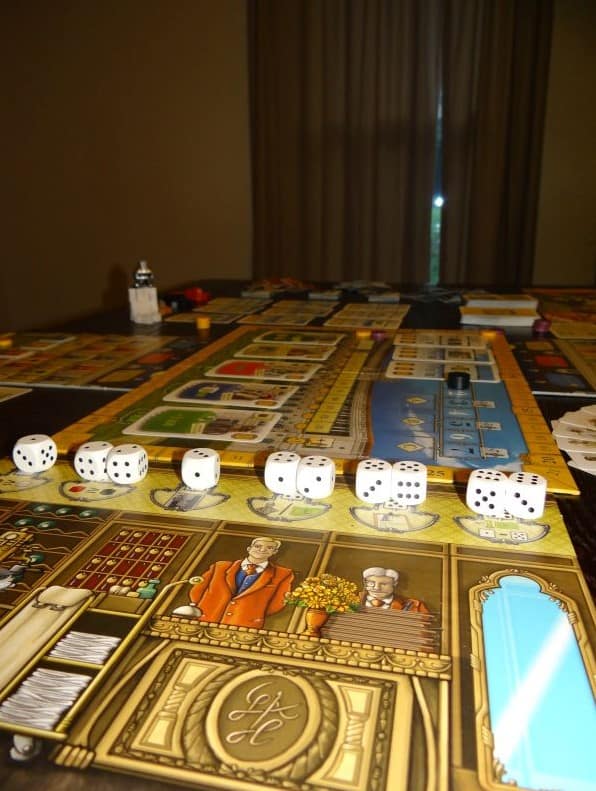 The dice, the dice are calling!

From the minute I opened the box the character design on all of the cards and the instruction manual (you’re guided through the rules by a maître D named Leopold) grabbed my attention, and just wouldn’t let go.  That’s not to say each card is a work of art in the style of say, magic the gathering, but the characters are interesting, and their depictions are just cartoonish enough to be amusing, yet serious in a very whimsical fashion.  I found the cards themselves to be of a slightly lighter stock than I would prefer, Ive played the game through a number of times, and they are already starting to show some wear from shuffling around the center.  The boards, however, are very thick card stock that I’m sure will last a lifetime of abuse.  The wooden pieces are exactly what you would expect, little cubes of colored wood for your different food orders, as well as round markers for your spots on the Victory/Emperor/Currency track.  The hotel room markers are also very thick, which I like, since you’ll be handling them quite a lot throughout the game.  As a whole, the pieces of the game are all decent to great quality, and I was very satisfied with how they handled, and even more satisfied with how they looked.

My love of Tenacious D and Wes Anderson films sold me on this game.  I know, I know, its not schnitzel, its STRUDEL.  Sue me.  At my table, its a schnitzel.  This game manages to perfectly capture that delicate blend of simplicity and game balance that often eludes other games of this genre.  There certainly is some luck involved, as the actions you can take are primarily based on the roll of 10 dice (in a 2 player game) that are broken into 6 categories.  However, the turn order as well as having so many actions means that even if you didn’t get your ideal roll, you’re pretty much guaranteed to have a decent move to make.

The hotel has many rooms.

Now lets talk mechanics.  There are a lot of things you need to keep your head around: the food in your kitchen, the guests in your café, your position on the emperor track as you approach rounds 3, 5, and 7, open rooms, and of course cold hard cash, in the form of krones.  Each of these will impact your turn dramatically, and each one demands your attention.  In my opinion, that is one of the reasons this game positively shines.  Each of these elements are woven into each other expertly using your staff and guest cards.  Lets say, for instance, you’re approaching turn 5 and you’re about to be penalized 10 Victory Points because you only have 2 Emperor Points and you need 6 to avoid a penalty. It’s your action die draw, and you only have one 4 to pull.  That gets you to three Emperor Points.  So, you pay 1 krone to add another die to your pool, getting you to 4.  You have a blue guest that gives you one Emperor Point when you finish his order, so you pay 1 krone to dish out the necessary cake and strudel.

Ho-ho you say, that only gives you five Emperor Points!!  True, but you also have a “stallmeister” card in your staff that gives you an additional Emperor Point when you place a blue guest, taking you to six.  It’s an intricate dance that requires some good forethought two or three moves in advance, but if you’re smart, you can get yourself out of sticky situations quickly, and its just downright fun to watch a plan come together.  That being said, its heartbreaking when your well-thought-out scheme falls to pieces because the person who goes before you steals that last 1 on the action board and denies you that precious schnitzel you need to finish your nefarious and brilliant plan.  I’ve lost this game over one single schnitzel, room, or wine more than once.  It gets that close.

Much like a real hotel, where cramming more than 2 people into a single room can get a bit awkward, this game is best with 2 players.  There, I said it, and I stand by it.  Wait time between turns with more than two people can get very long since turn order is determined by tiles with two numbers.  The person who goes first passes to the second person, who takes a turn, to the third person who goes twice, back to the second player who takes their final turn and finally to the first player.  In theory this is fine, and it plays out in the games mechanics quite nicely, since getting the first draw can be a tremendous advantage, especially if no 6’s (the wild card number) are in play.  However, from a more practical standpoint, I prefer not to be able to finish an entire bottle of soda between turns, as this just creates more downtime in the form of constant bathroom breaks. 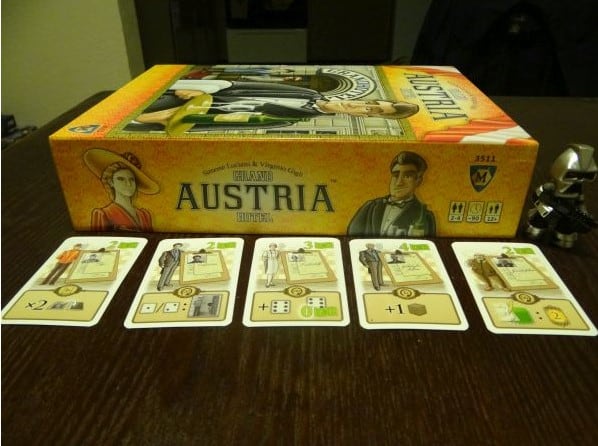 Various cards of the game.

More than two people also stretches your resources a bit thin, and there are rules for passing, but those rules don’t guarantee you’re going to get something more helpful the second time round.  if you go first, you essentially know that when the die pool gets back to you, you’re going to have whatever nobody wanted in the first place.

One of the only things I found a bit vexing about this game was its use of symbols on nearly everything.  Instead of writing out “this staff member gives you 4 VP for each red room at the end of the game”, they use a symbol to denote the idea.  It’s not awful, and once you’ve played it through a couple of times you’ll figure out what each symbol means, but when you first start playing, you’re going to want to keep your rulebook handy, because you’ll be checking it every five seconds to see what each staff member and guest does for you.  There’s actually one guest, E. Gizia, whose symbol apparently never made it into the rulebook.  His special is that he allows you to take an extra turn without taking any dice.

Could You Please Fill Out Your Guest Comment Card?

All that being said, I love this game.  Its got personality bursting out of its 2000 thread count sheets, its sleek, well thought out, quick to pick up, and hard to put down.  Since I got my copy I’ve probably played it ten times, and it will be my go-to for new gamers who come over to visit for a long time to come.  I highly recommend it!