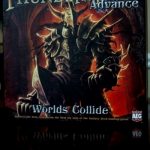 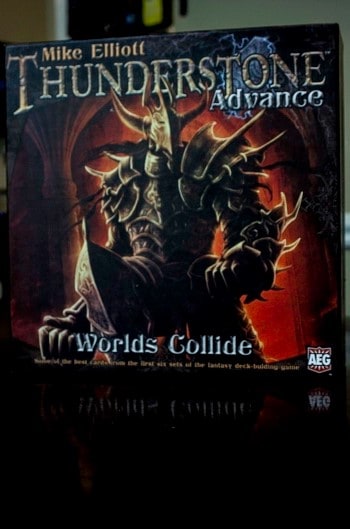 Everyone loves charging into the darkness of a dungeon and stabbing things. It’s a time honored tradition amongst gamers. Thunderstone Advance: Worlds Collide provides exactly what the monster hunting, deck building fans are looking for. From AEG, Mike Elliot’s Thunderstone Advance: Worlds Collide collects cards from the previous six sets of the game, bringing them together in an incredibly satisfying dungeon crawl for money, power, and prestige.

Oh, and a chance to save the world. If you care about that sort of thing.

Setting up the game takes a few minutes, but goes a little faster if players help with setup. As with any game, the board should be placed where it is equally accessible to all players. One player can put together the starting decks, if they aren’t already prepared. One or two players can work together to set up the dungeon and village.

The dungeon is formed by selecting three monster groups, one of each level 1 through 3. There should be thirty cards in the dungeon deck. Occasionally, if using randomizers, a dungeon feature will be added to the deck. In the base set for Thunderstone Advance: Worlds Collide, the only feature that may be added is a Guardian. Finally, there will be a Thunderstone Bearer. This is the “final boss” that the players hope to defeat.

The village is formed by placing the basic starting village cards on their respective spaces on the game board. The number of each is determined by the number of players. The person setting up the village should place 3 Regulars, 2 Longspears, and 1 torch per player. Four hero card decks should be added to the village, either through player selection or using the randomizers. These hero decks should be organized so the hero levels are in order. Finally, the village items and/or spells need to be added. This may be also be done using a randomizer, or player selection. There should be 8 stacks.

By the time the dungeon and village are set up, each player should have a starter deck of twelve cards. Each player draws six to form a starting hand.

The active player chooses whether to visit the village, enter the dungeon, prepare for a future hand, or rest. Resting simply allows a player to destroy one card in his hand. Preparing allows a player to place as many cards as desired on top of the deck, to be drawn for a new hand at the end of the current turn. The real meat of the game comes from visiting the village and entering the dungeon.

Before players even consider going into the dungeon to kill monsters, they should visit the village to acquire heroes, tools, spells, and generally build their deck so it is more efficient and effective. Any cards with Village effects may be resolved when visiting the village. Cards may have a gold value. The values of each card are combined and used to purchase 1 hero or village card. If the player has already killed monsters in the dungeon, there is the option to spend XP to level up heroes.

The dungeon is where the adventure really happens. When a player enters the dungeon, any Dungeon Abilities on cards may be used. Weapons may now be equipped to heroes. Any trophy effects from previous kills must be resolved. 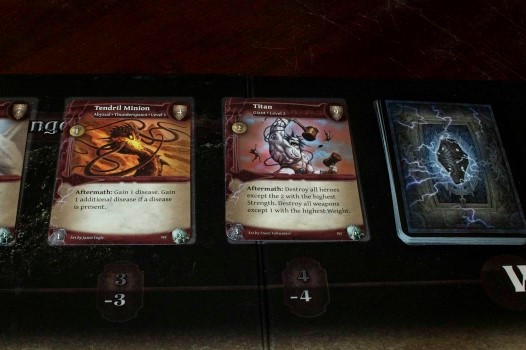 Once all effects are resolved, the player announces which monster shall be heroically defeated- or, you know, just slaughtered. The player should add up the attack values of all cards being used. The total attack value should be compared to the monster’s health. The higher number wins. 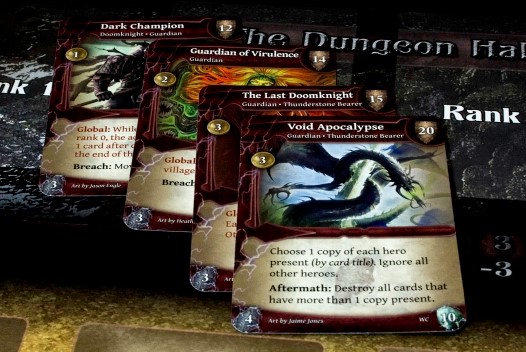 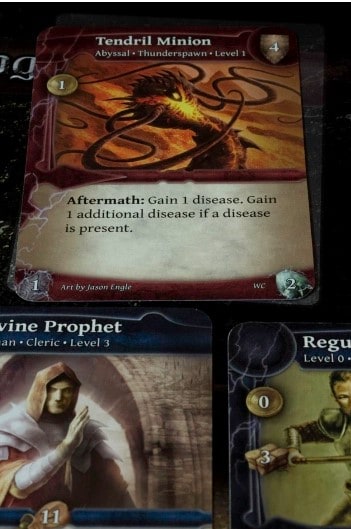 After the fight, slide any remaining monsters down toward rank 1, filling in any empty spots. Watch carefully for monsters with Breach effects. If they reach rank 1, the effect triggers as the monster breaches the dungeon and escapes into the world. Once all the active cards have been moved, fill in the remaining Dungeon spaces with cards from the top of the dungeon deck. 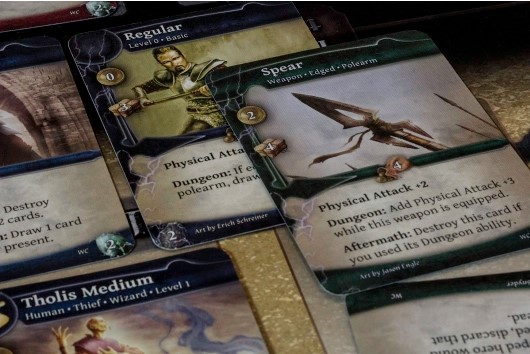 The end of the game comes when the Thunderstone Bearer has either been defeated or reached rank 1 and escaped the dungeon. Following the game, tally the players’ points by adding up the point values on all cards in each deck, including the active hand and discard pile. The player with the greatest number of points wins.

Thunderstone Advance: Worlds Collide is a successful combination of previously released content into a new base set. Having never actually played the game in its earlier incarnations, I cannot speak to improvements that may have been made. What I will say is that the set is great for new players looking to get into Thunderstone. No knowledge of previous releases was necessary. We were able to pick it up, set it up, and get on with the adventure.

The cards and board are all high quality. They look good. They feel good. They last play after play. For a game like this, with such potential for replay, that’s incredibly important.

The box is heavy, even with the empty space for future additions. It’s very satisfying to set it on the table and break it open for game night. As deck builders go, Thunderstone Advance: Worlds Collide is quite well developed. The similarities with other deckbuilders are to its credit, while it is different enough to be its own entity in a market saturated with genre clones.