With tower defense games being so popular on mobile platforms, it was only a matter of time before they made a return to the gaming table. Dragon Valley: Rise of Corundia is part of that triumphant return. Designed by CW Karstens and published by Diamond K Games and Game Salute, Dragon Valley uses simple components and mechanics to create an engaging tower defense experience.

Dragon Valley’s board is fairly expansive and will need a good amount of table space. The board should be placed between the players so that they can easily reach their respective keeps.

The purple cubes should be set aside within reach of the players, to be used to mark “game state” effects through the course of play. The rest of the cubes should be put in the cloth bag, if they are not already there. Cubes will be drawn from this bag later.

The King’s Aid cards should be placed in the easily identified draw deck spot at the top of the board.

Building tiles should be shuffled and kept face down within reach of the players.

The “Enemy Territory” tiles should be shuffled, then placed face down in the center of the play area, in the easily identified 3×3 grid.

The player score token should be placed, “30” side down, on the start point of the score tracker. The other player markers will be used later, and should be kept near the player who selected the tokens’ color.

Using any method the players prefer, select the first player and assign the King’s Favor token. You are ready to play.

The King’s Favored wields a great deal of power, but bears a heavy burden. While the numbers will vary, each round will begin with the selection of building tiles, unit tiles, and King’s Aid cards. The number of each item that is drawn is dependant upon the number of players. The items drawn are divided into a number of groups equal to the player count. The only requirement is that each group has at least one item. Selection of the grouped items is based on the number of players, with the King’s Favored, who grouped the items, receiving whatever is left after the other player(s) have selected.

The Deployment Phase occurs once all players have their units, tiles, and cards. It is at this time that the cubes representing units are placed in their respective locations on the game board. Enemy units- orcs, dragons, and battering rams- are placed in the Mountain Pass. Friendly units- archers, knights, and trebuchets- are placed in the Keep.

The Special Events phase occurs after the deployment process is complete. During this phase, King’s Aid cards which trigger as a special event are played. In addition, if a player has the Sappers building in play, he may use the Sappers power during this phase.

Once all Special Events are resolved, the game moves into the Action Phase. All other King’s Aid cards may be played during this phase. Unless otherwise specified, the cards may be played before, during, or after a player’s turn. Also, unless a card says the player “may” use the effect, the card must be played. 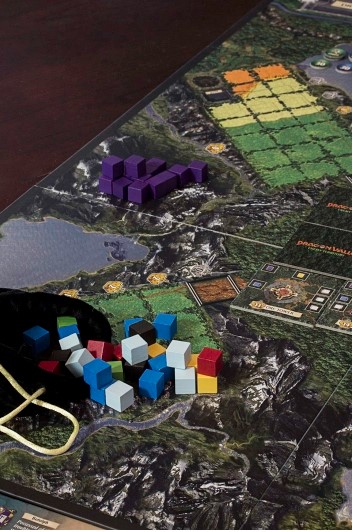 Starting with the King’s Favored, each player performs one of three actions.

When all players have taken their turns, the Enemies Advance. Each enemy unit will move toward the keep a number of squares equal to their movement rating, unless they encounter a friendly unit or a construction which influences their movement. In the case of encountering a friendly unit, players should consult the player reference card to determine the outcome of the battle.
The round is over. Players should discard any unused cards that they still have. Purple “game state” cubes should be removed from the board at this time. The King’s Favor is passed to the left and a new round begins.

The end of the game is triggered when any player has reached or exceeded thirty points. Once this occurs, the final round of the game begins. Continue play so each player has had an equal number of turns and enemy units have moved. When all players are finished, tally the total points. The player with the highest score is the winner. In case of a tie, the player who conquered the most Enemy Territory wins.

The Siege Draws On

Dragon Valley: Rise of Corundia approximates siege warfare in a simple, straightforward fashion. With that in mind, this is not a title for players who prefer quick games. Players who enjoy spending a little more time at the table, however, will probably enjoy Dragon Valley. While not as long a game as some popular titles, a session can easily take two hours.

The components are simple, which helps players focus on gameplay. The board is fairly easy to read, as are the cards and tiles. Handling the cubes, including pulling them from the bag, is satisfying. In today’s hobby scene, the tactile experience has become as important as the visual design. While it won’t win any awards for component design, Dragon Valley gives players a variety of things to touch and manipulate, and provides a good experience in that regard.

Game play is incredibly simple, once players have had a round or two. The different phases are unique enough that there is no confusion as to what the purpose of each phase is. While more casual gamers may not like longer games, Dragon Valley is easy enough to learn that it is accessible to players of all skill levels. Even better, the strategy element of the game scales to the experience of the player, with more experienced (or aggressive) players having the option to really push the limits of the mechanics for a broader experience.

And yet, when all is said and done, Dragon Valley is pretty much a siege. Even as the phases pass, the game moves forward slowly, like a ballista being wheeled into place outside a fortress. Some players will appreciate this, as there is no pressure to act quickly. Others will prefer something more fast paced.

But what you really want to know is if it’s worth playing. Yes, Dragon Valley is worth playing. Try it before you buy it, but if you find it meets your desires for a game at the table, nobody will blame you for adding it to your collection.