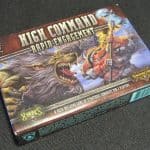 If you’ve been curious about Privateer Press’s High Command deck-building game but didn’t want to sink money into a full-sized core set without knowing if you’d like or not, Rapid Engagement may be for you. This smaller version of High Command gives gamers a taste of the system without the financial investment : and as a stand-alone game, it can be added to other base sets or played on its own.

High Command : Rapid Engagement comes in a small box and contains the following –

Honestly, absolutely nothing. But, this is good. The game plays the same way as the core games in the High Command series, so please check out the review of High Command : WARMACHINE for rules on how to play the game. The difference is that this is just a smaller set without the bigger price tag. Some of the cards seem to resemble Faith and Fortune moreso than the base Hordes/Warmachine sets.

A Quicker Path to Victory

There’s not too much to say about this set when comparing it to the original base sets – the decks do come pre-constructed so there’s not a lot of customization in this set but it is good for people who want a taste of the game without the hefty bill. The decks seem pretty balanced when just looking at the stat/cost values, although we found that Khador had a much higher success rate, even when we switched off decks. I will say that unless you’re a really seasoned High Command player, Rapid Engagement is a good choice because you don’t spend as much time shuffling through your options when it comes to building the right deck – that work has already been done for you. Set the game up, shuffle, draw your cards, and get in it. 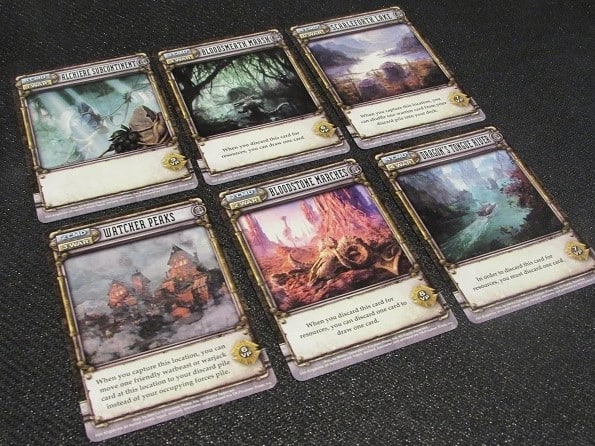 The font is still tiny, and I do wish that Privateer Press had made an effort to change this, as many people brought it up as an issue they had with the game – I feel that with this small set, it would’ve been the perfect way to debut or test out a different approach to the text at the bottom of the cards. Otherwise, materials were up to par with the other games and gameplay is essentially the same. High Command : Rapid Engagement retails for $11.99, and is worth the cost if you’re looking to try out this strong-themed deck-builder.