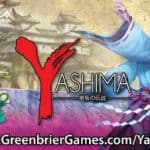 Greenbrier Games has had quite the busy year so far. They’re working on bringing us Zpocalypse 2 and their recent Kickstarter for Folklore: The Affliction has them running at full speed. This year at Gen Con the company still plans to blow attendees away, and they’ll be doing so with new games and a new scenario for an existing favorite.

To start things off, let’s check out what games the company will have at their booth this year:

Grimslingers will debut this year at Gen Con, and it’s got us excited. It’s a fast-paced dueling card game of elements, magic, and downright tricks. We’ll be reviewing the game before the convention!

A new Ninja Dice expansion, Kage Masters, will be available at the convention! This time you get to play as a kage (one of five different new ones to be exact), which brings its own kage dice and unique abilities to the game!

AEGIS, a new combat-style board game where you combine robots to essentially make Voltron and bring the pain on your opponents, will be making its way to Kickstarter soon. It’ll be on display at Gen Con this year, and it’s more polished than ever!

A prototype version of Folklore: The Affliction will be on display at the convention this year. This game smashed Kickstarter earlier this year, and attendees will finally get to see an up close and personal version of the game during the event. It’s worth checking out for the miniatures alone!

Zpocalypse 2 is an upgraded version of the original, and it’s taken a turn in the tower defense direction of games. The graphics have been totally overhauled, new mechanics have been added, and the game offers a brand new version of fun. It’ll be on display at the Greenbrier booth this year!

Champions of Hara is an adventure board game where players race to contain an unstable hub of energy known as the Conflux. A prototype version of the game will be available at the Greenbrier booth this year, where you can learn more about it.

Perhaps what I’m most excited for is Escape the Sanitarium. This game combines resource management and role-selection to pit players against each other in a race to escape this mental institution. You’ll choose the roles of the players to your left and right based on your varying levels of sanity. The artwork looks amazing and you’ll be able to see for yourself at the convention!

Finally, a brand new scenario will be playable for Dragon Tides! This will be a special event hosted at the Greenbrier Games booth at the convention this year. Dragon Tides is a dice/card-based, modern-day dungeon-crawling miniatures game starring Bruce Lee and Brandon Lee. Play as Bruce, Brandon, Viktoria and Luke as they delve into their individual story lines, bringing their own gameplay elements to the table as they go up against the “Tiger Organization”.

The new scenario for this year is called “The Long Con”, and here’s what you can expect:

In Dragon Tides: The Long Con, cast the characters as the hero team against the villain’s side. The heros are attending Gen Con when they are drawn into their own private game. To narrow down the true villain, who has given the heroes’ several false pawns, they must visit different locations like the Forged Foam Fighting Demos and the Convention Dungeon. Each success narrows the possibilities, or they may still pick the wrong character and suffer dishonor. Either way, they must do their best to stop the villain from getting away.

You can play the event at the GBG booth each day at Gen Con from 1PM-4PM. Definitely come by the booth this year to check out all of Greenbrier’s new releases, and don’t forget to pick up some great games while you’re at it. I know I can’t wait to see Escape the Sanitarium, but what are you excited about?