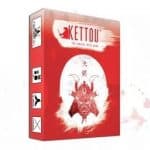 You are reading
Table Forged Sharpens Steel with Kettou on Kickstarter

Table Forged LLC, the company that had us swigging ale and burping at each other while arm wrestling with Iron & Ale has come back with some stout vengeance in their latest Kickstarter endeavor: Kettou. This dexterity-based game has you clashing against opponents in a mastery of Bushido skills in gameplay that’s never been seen before. Can you walk away from battle as the better samurai? Only your skills will tell.

Hit cards are placed between players in a central game area. Players will then, at a reader’s call, use their Bushido skills to slam down on a Hit card to strike an opponent, simulating a fast-paced samurai duel. You must plan your attack carefully, for your opponent may attempt to match your strike. This will leave the samurai with the fastest strike landing the blow.

Players will utilize unique and historic samurai cards that will become the basis for stats and more. You can choose between 8 total legendary samurai, each with their own unique ability to use throughout combat. Take a look at what you’ll be working with: 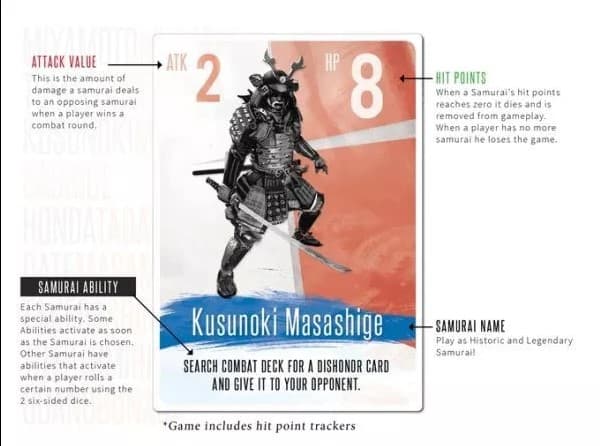 Finally, players will make use of Bushido cards throughout the game that have the opportunity to give them an edge in combat. When you obtain Combat cards you will turn them over, revealing a bonus. These cards will be placed on top of Bushido cards, at player’s choice. After each combat phase players will roll 2d6 and if the number rolled corresponds to a Bushido card with a Combat card placed on it, that bonus triggers for the corresponding player through the next combat phase.

What’s more is that each copy of Kettou will come with downloadable audio files that can be used throughout the game. These files will call out times to attack, instruct players to get ready, and much more. What’s even better? These files are completely free to anyone who purchases a copy of the game. Kettou looks like a lot of fun, and you can slice yourself a copy for just $18 through the new Kickstarter. For a $40 pledge you can get a copy of the game and an awesome t-shirt (which I totally want – I won’t lie).

For more about the game, to slap down a pledge, and to even see how the game is played you can head over to the Kickstarter campaign. The game is 92% funded with 21 days to go! Table Forged did an amazing job with Iron & Ale and honestly the development team is full of great people. They know how to make fun, interactive games that engage players in ways like no other games can. Make sure you check this out, and pledge to get me one of those cool shirts!