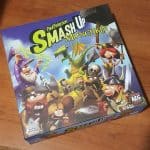 You are reading
Written Review – Smash Up! Munchkin 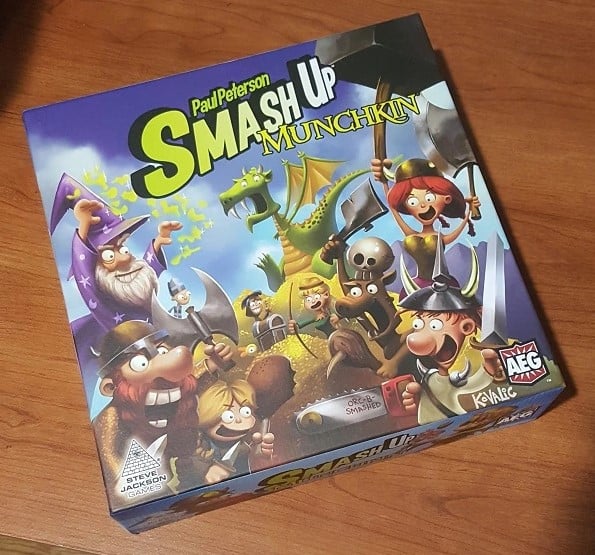 The Smash Up! you know and love just keeps getting bigger. AEG has joined forces with Steve Jackson Games to create a great mash-up of the classic Smash Up, but with the humor and artistic style of Munchkin! This new set is playable on its own and does not require the original base game to play, the first of all of Smash Up’s expansions. With 8 new factions and new fun mechanics, Smash Up! Munchkin will reignite your interest in Smash Up, and possibly even Munchkin!

Included in Smash Up! Munchkin is:

This set features the art styles of John Kovalic, the artist behind SJG’s Munchkin, but with a classic Smash Up! twist.

Not much has changed as far as the base rules…play a minion, play an action, break bases, first player to 15 VP wins. Check out the review of the original Smash Up! for detailed rules.

However, with Munchkin jumping in the ring, some new mechanics have come into play, and we’ll look at those first.

The first thing to note in this set is the addition of Monsters! Each base will indicate how many monsters are drawn from the monster deck and added to the base. These monsters add their power to the breaking point of that base. If a power 2 monster is placed at a power 20 base, the new breakpoint is 22, etc. These monsters are treated like all other minions in regards to destroying and moving them.

Destroying monsters will net, you guessed it, treasure! Treasure cards can be played on minions or during play for bonuses and tricks. Some are one time use cards, while others can turn ordinary minions into unstoppable powerhouses! At least until they break the base they’re on.

Outside of that, play goes as normal. Now, let’s look at the new factions, and what each specializes in.

Orcs are boosted when there are a lot of them at one location! They deal a lot with destroying minions (can you say TREA$URE??) but can also work will with manipulating the opponent’s presence at a base. Many of the Orcs have low/medium strengths, while the higher strength Orcs have talents like…do nothing.

The Elves are…interesting. These do a lot of board manipulation, and a lot of it is in ALL player’s favor. Depending on the current base and conditions that are in play, this can force a lot of base breaking, or allow someone to sneak in a high VP score when they were otherwise falling behind. Others, like Flower Child, can be seemingly innocent, unless a powerful minion is taken.

Mages focus on deck-cycling. A lot of “discard a card to do X” is found within the Mages’ talents, as well as spreading around ample opportunity to gain treasure (what, are you saying you DIDN’T want extra monsters at your base? oops).

The Clerics are a fun bunch. Bringing cards back from the discard pile, all the while helping themselves (and other players) boost their power and maintaining an lengthy board presence. It is hard to get Cleric minions off the board, since they like to move around after scoring and have a pesky habit of being pulled back out of discard piles.

Thieves are just what you’d expect…with many ways to get treasure into their hands…and with it, victory. Thieves have the power to trade in treasure cards for VP, as well as reveal treasure cards to boost their minions to break bases.

Halflings are numerous and specialize in piling themselves onto one location. With some nods to a favored Tolkien series scattered throughout, the Halflings come with a few pints of humor among their numbers.

Warriors. Destroy. Monsters. They lure them onto their locations and then wipe them out, just like any warrior should. Their fury adds the power of their destroyed enemies to their numbers and can quickly amass the power required to overtake a base.

And finally, the Dwarves. These guys hoard treasure like no other faction could even dream of. They keep treasure cards on hand as extra actions, and manipulate treasure cards into their discard piles instead of being returned to the Treasure discard. 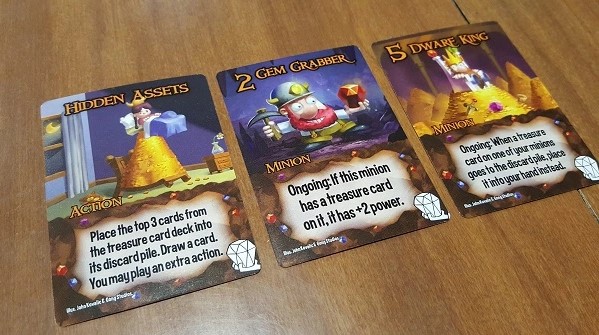 Alright, so I need to preface my thoughts on this game by saying that I’m not the biggest fan of Munchkin. The game itself isn’t bad by any means, but for me personally, after years of playing games, I just no longer enjoyed it. I wasn’t extremely excited when I heard about this new Smash Up set, but the more I heard about it, the happier I was to at least give it a shot. And I’m glad I did. Since this expansion is mostly what you’d expect out of Smash Up, with Munchkin themed art/factions, it did hold my interest and in fact is in competition for my favorite expansion yet.

I like that this set is large enough to be a base set, and is definitely great for adventurer-loving gamer. You’ve got your stealy/healy/damage-deal-y factions and they are humorously accurate to their general stereotypes. We had a lot of fun with this expansion and could go well with any of the existing factions for the ultimate fantasy experience. Fans of RPG’s will get a kick out of Smash Up – Munchkin just for the jabs the cards make at all sides of the adventuring life. 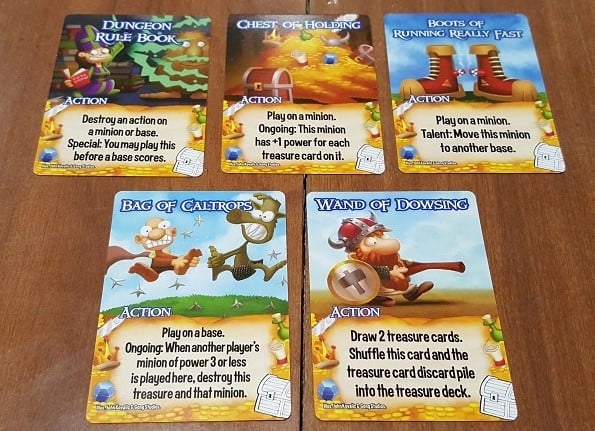 The treasure cards add a fun side-mission of sorts to the game, though the importance on them really varies based on your chosen factions. The same goes for the Monsters. I like that they add to the power of the base and give your adventurers an extra challenge throughout the game. Some factions deal with Monsters better than others, so it is important to read the effects of the Monsters -and- Bases before diving in to battle over them.

Of all the expansions that have come out for Smash Up, Munchkin is the one I have returned to the most, and as I mentioned before, is in competition for my favorite set. Whether you have the base set and all other expansions, or you want to get into Smash Up for the first time, I’d highly recommend the Munchkin set.

Smash Up – Munchkin retails for $34.99 and is absolutely worth it. If you’re looking to complete your loved one’s Smash Up collection, or get them hooked on this genre, Munchkin would be a great gift either way. I’m going to wrap this up here, because there’s a lovely castle with a terrifying Monster that my Orc Clerics are dying to infiltrate…