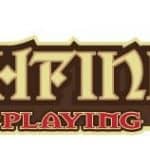 You are reading
Playbook For Pathfinder App From Trapdoor Technologies

In the second quarter of this year, a new app for iPad is coming for Pathfinder players and GM’s alike. Playbook for Pathfinder is coming to life after Trapdoor Technologies announced that it has obtained the license to create this sleek supplement for players that would prefer to not carry around stacks of rulebooks and adventure path modules. Everything one might need for playing the game, or running the game, will be condensed into this one app.

“Playbook will allow players to roll up and manage characters, while Game Masters can purchase and prep adventures and campaigns in the award-winning world of Pathfinder,” says Chris Matney, Managing Director at Trapdoor. “With quick rules lookup, information sharing, stat tracking and more, this is the app roleplaying gamers have been waiting for.”

Prior to the official licensing, Trapdoor has published a playbook of sorts for the game with basic text and help for players, but with this new partnership, it will contain official Pathfinder artwork, libraries, rule sets, and access to Pathfinder Society Organized Play Events. Game Masters will be able to quickly organize games and save valuable play time with this quick new app.

Having been in the position many times of having to lug around what seemed like a library for a quick game session, I definitely see the potential for this app. I know many people who will jump on board for this as well, although I am wondering if/when an Android version will become available. Until then, keep your eyes peeled in the second quarter of 2016 for Playbook for Pathfinder!