You are reading
The Five Play Review: Runebound 3rd Edition

In 2004, the first edition of Runebound was released by Fantasy Flight Games. A fantasy exploration and adventure game set in the world of Terrinoth where players moved about completing adventures and fighting monsters using that to increase their overall power to destroy the main Dragonlord Margath. One year later, the second edition was created with a couple of changes. The most notable was that combat was changed from a 1d20 to 2d10 – greatly reducing the luck factor, but nothing much else changed.  Last year, the newest edition for the game was released and though in the same overall world with the same basic premise, most of the rules have changed.  Was it for the better? These are my thoughts after 5 plays between 2 and 4 players using most of the heroes and both villains included in the game. 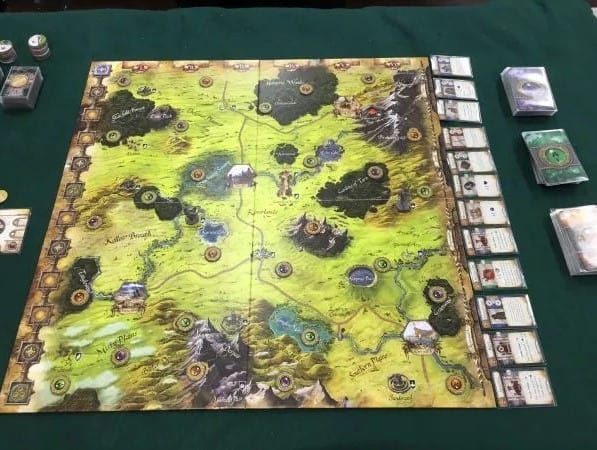 The game board with all the adventure gems, asset cards and adventure decks ready to go.

Runebound 3rd edition is a competitive game for 2 to 4 players each playing the role of a hero with a goal to move about the map succeeding in missions in the hope to level up their character with skill cards and cool gear. Most games require a player to confront and destroy the main adversary (at least both scenarios in the main game are like that).  The components are what you expect from a Fantasy Flight Games box set – beautiful miniatures, decent cardboard chits and nice cards (both normal and half-sized).  Also included are dice for movement (still the same novel system for movement).  Before your first game, you need to complete the movement dice by placing stickers on the each side.  This has been a sore spot for many people since for the price one pays for this, it shouldn’t require the hassle of placing stickers on blank dice – though I digress.

First players must decide on the main adversary for the game.  The box comes with two scenarios, but I am sure that there are expansion packs coming soon.  Next the story cards for the particular adversary are shuffled along with the asset and skill decks.  Lastly, 10 adversary specific adventure cards are shuffled to twenty basic cards to form three adventure decks (combat, exploration, and social). Place all adventure tokens on their associated spots on the game board. Players choose a hero, grab their associated miniature, three combat tokens and skill cards up to their hand size. Then each player chooses a spot on the board to start, the four cities are seeded with three assets apiece and you are ready for the first turn. 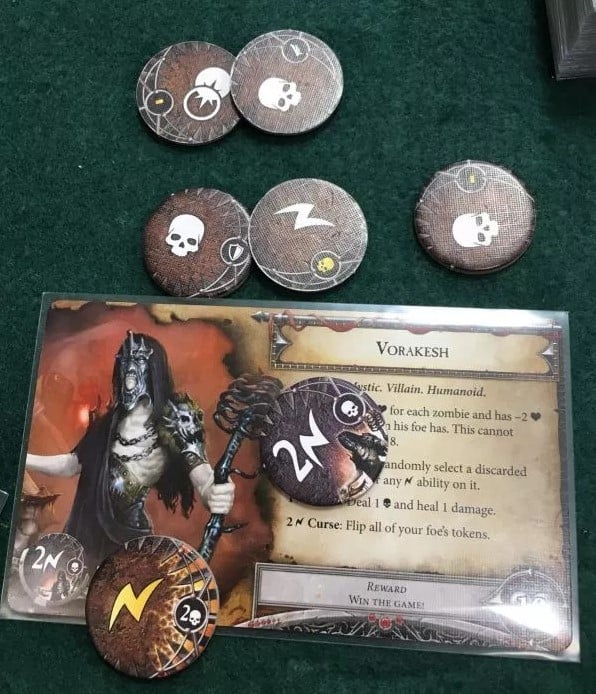 The adversary with both the second act and his special combat token.

Each character card has the setup side which shows the combat tokens that the character starts with, the number of skill cards and starting gold and location.  Once that is complete, the player will turn that card over that shows the character’s health, speed, hand limit, attribute scores (body, mind and spirit), surge ability and special power.

A player has three actions on their turn.  There is no limit to the number of times a player does a particular action as long as they don’t exceed the maximum.  Basic actions include movement, shop (while in a city), rest, train and adventure (costs two actions).

*Movement – Like all the Runebound games is still accomplished by rolling terrain dice equal to the character’s speed. Each die can be spent to move into that terrain type (cities and following roads use any terrain type).

*Shopping is easy: draw an asset card from the deck, sell any number of current items for full price and the player may purchase one of the four cards now located in the city.  A player can only have one of each type of card (equipment, weapon, clothing, etc.). Lastly, ensure there are three card in the offer for each city at the end of the action.

*Rest – When a player rests, you recover all damage if in a city, town, stronghold or shrine.  Otherwise, you roll 5 terrain dice and heal one for each die that matches the terrain of the hex you are in (if you are defeated –have damage  equal to your health, this is the only action that you can do).

*Train – Draw skill cards equal to your hand size and discard down to hand size if needed. Since you can use skill cards to ‘exert’ and change the outcomes of many luck based draws/rolls, you will be doing this a lot more often than you think.

*Adventure – If you are in a hex that has an adventure gen, you may spend two actions to adventure. The player flips the token to its inactive side and draws the top card from the corresponding deck. There are three types of adventure cards, quests – where the card will tell you to head to a specific location and spend an action there, event – two options that the player must choose between, or an enemy – where the character will have to fight using their combat runes. By completing quest, player will gain trophies that will allow your character to advance.

There are a couple of checks a player might have to do while adventuring – I’ll cover combat in its own section.  The first is an attribute test. This check happens a lot in a variety of situations like during combat, quests and events.  To check if you succeed, you draw skill cards equal to your modified statistic.  If you draw a card with star burst in the top right side, you got a success. Most tests require only a single success, but there are some that reward you for multiple successes.  You always draw a number of card equal to your skill level even if the first card gives you the required success.  The second test is the explore test – these happen most often on quest cards, but some abilities have you do it as well. Just roll a number of terrain dice equal to your speed and either match the terrain symbols to your terrain hex or to the choices on the quest card.

The runes have been casted. The hero starts with three where the monsters start with five!

Combat is played in a series of “rune casts”. The hero takes their combat tokens and gives them a good shuffle and casts them to the table. A second player takes the enemy tokens (the bad guys start with five during the first act, gain a sixth in the second act with the villain having their own seventh token). First each combatant counts the number of yellow icons with the highest having the initiative. You perform one combat action spending the token or token that you casted: deal physical damage, deal magical damage, use agility (either flip one of your remaining tokens or make your opponent recast), trigger a surge ability (each character has an innate ability, but you can acquire more), and add to a double token (doubles whatever is atop of it). The only difference between heroes and monsters is that physical and magical damage is combined into “enemy damage”. The last two types of token face is a dash (nothing) and a shield which blocks damage. A combat round continues back and forth until both players have passed and a new round can begin. Combat continues until one of the combatants are defeated or the hero flees!

Skill cards fulfill two purposes. By discarding a skill card, the player may exert allowing to reroll one terrain die (either movement or exploring) or add a card to any attribute test. This exertion can happen as many times as the player wants until they run out of cards.  The second and more important use for those cards (though, the way I roll I wonder that sometimes) is spend trophies that you acquired from adventuring to gain additional abilities. Skills are all keyed to the three attributes and a hero may have active skill cards equal to their attribute value. 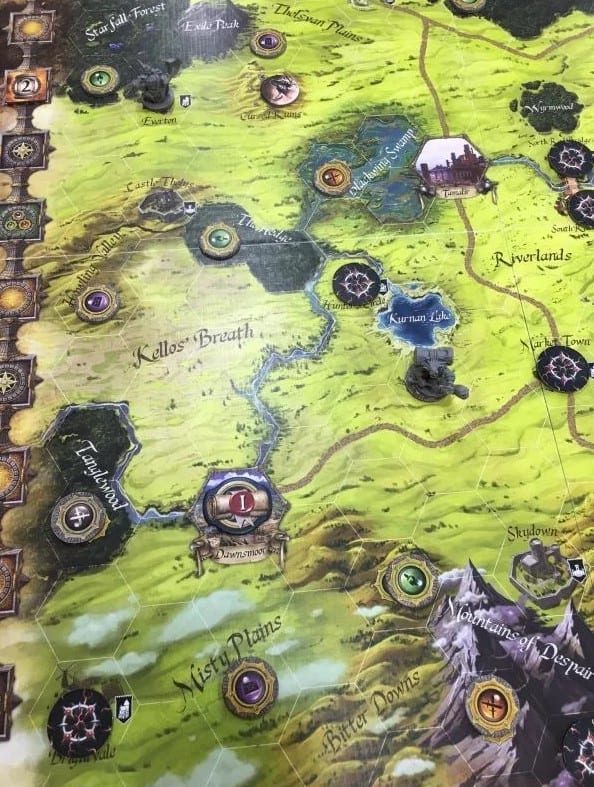 Vorakesh has been placed and zombies are over running the countryside – can the heroes win against overwhelming odds?

Play continues in a series of rounds until either a hero defeats the adversary (winning the game) or all players lose per the scenario’s description. As the rounds go by, story cards will be drawn throughout the game at certain intervals giving either additional quests or events that the heroes can face.  Since these are tied to the adversary they are playing, they paint a nice story about each villain enhancing the game experience.

My thoughts – What do I think?

The updated rules make this a wonderful and fun RPG-lite game. I’m sure that there will be expansions in terms of heroes and villains to give this even more re-playability.  What really sets this game apart is the combat. Who would have thought that casting runes that have only two sides would give that much tactical variability?  I am really excited for this update and if you like adventure games, you should really try this one out! I was pretty worried that the combat chips would take too much abuse and the game would suffer, but it looks like Fantasy Flight Games has thought of that and will have a replacement combat token sheet available!