You are reading
Ride the Rails with Rail Raiders Infinite, Now on Kickstarter 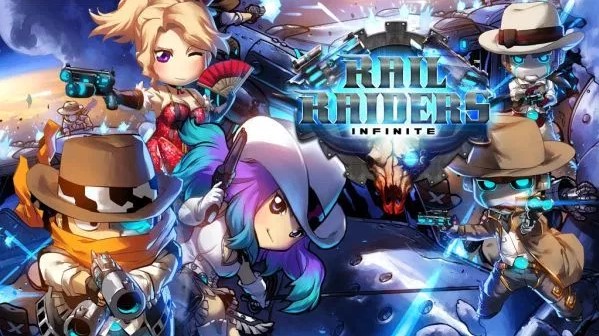 Not too long ago I finally got to sit down with a game I’d been looking at since it’s first announcement – Super Dungeon Explore! I was lucky enough to get the game from a friend during our time in Texas and once we got it to the table I was thoroughly impressed with its simple, yet engaging gameplay. Soda Pop Miniatures did a great job with the game, and its success with me got me all excited for their newest endeavor: Rail Raiders Infinite.

Rail Raiders Infinite is a new miniature-based board game from Soda Pop that’s now campaigning on Kickstarter. In the game you play as a bandit that’s attempting to raid the Interstellar Express – the fastest, most luxurious ride on the rails you’ve ever seen! You move about from train car to train car searching for loot and whipping out your pistols to deal with the dangerous Law Bots that guard the train and its passengers.

Gameplay is simple, but as with Super Dungeon Explore!, it’s packed full of fun. The game is timed by a deck of cards called the High Noon deck. On their turn players will draw a card from the deck, which will have its own gameplay effects on it, and the game clock will count down. When the High Noon deck runs out of cards the train has reached the station and players will need to hop off the train and count out their loot (in amounts of Double Dollars). Throughout the turn players will have Showdowns with each other as well as the Law Bots, during which they roll a number of custom dice with faces matching playing cards. The goal is to make the best Poker hand possible to beat out your opponent. Players will continue taking turns, carrying out three actions per turn until the High Noon deck runs out. The bandit that’s searched the highest in the right place will come out as the winner!

Rail Raiders Infinite looks to be a light-hearted game with amazing components, including those chibi miniatures that we’ve all come to love. (Seriously, they’re about the only miniatures I can actually paint eyes on.) You can get your own copy for just $50 via the game’s Kickstarter, which is a pretty sweet deal. Not to mention, you get all of the unlocked stretch goals. Make sure you stop on over to the campaign, where you can even see Rail Raiders Infinite in action!

Facebook Twitter Google+ LinkedIn Pinterest Tumblr
Previous article A Little Bit of This and A Little Bit of That – A Look At Kickstarter Games
Next article The Five Play Review: Runebound 3rd Edition
Announcement