You are reading
The Five Play Review: Assault on Doomrock 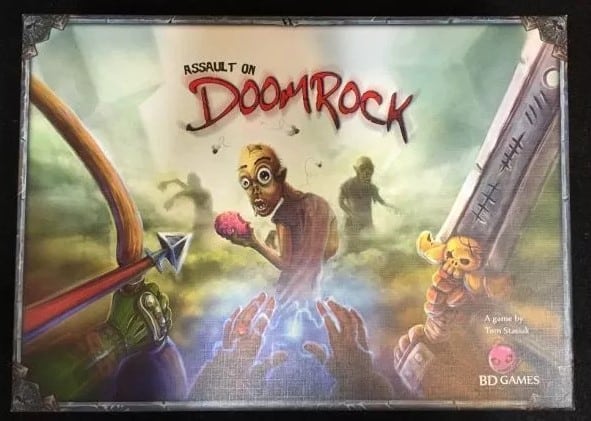 In May 2014, a game designer in Poland started an IndieGoGo campaign to raise funds for a board game called Assault on Doomrock. The successful campaign closed in July of that same year having raised a little over 26,000 US dollars (6,000 was the goal). Fast forward to May of 2015 and the first expansion to this game showed up, this time on Kickstarter under the company BD Games. In June of 2015, a second successful campaign finished raising just under 117k US dollars. Ever since seeing this game, I wanted to pick it up and the expansion on Kickstarter gave me the ability. In the end, I was able to pick up the second edition of the base game and the expansion. This allowed me to have all the fixed cards and rules, but still get the cool stretch goals from the Kickstarter.

These are my thoughts after 5 plays being between 1 and 4 players. This review will be mainly about the base game since I really wanted to get familiar with the original game before I started adding all the expansion items. That being said, onward to components and gameplay!

Assault on Doomrock is a cooperative game for 1 to 4 players each playing the role of a hero with a goal to battle and defeat the main adversary in a final epic fight at Doomrock. Heroes move through a set of location cards working their way to Doomrock, trying to level up their character with additional awesome abilities while trying to locate and equip impressive gear to ensure their success. The components are simple and functional – cards make up the most of the components with tokens and chits making up the rest. There are no fancy miniatures for this dungeon crawler.

A two Hero Set-up. Note that each hero is a combination of a class and a trait card – thus the Stinky Ranger & Clumsy Witch

Set up is fairly quick. First the adventure deck is created, which consists of 10 total cards. The last card of the deck is always Doomrock with the next six being two of each terrain type (mountain, wilderness and wilderness/town) randomly mixed. The final three are one of each terrain type which are shuffled and placed on top. Then reveal the top three locations, placing secret tokens (exclamation marks), items or ability cards as needed. Next, shuffle all the individual decks and gather all the tokens nearby for all players. Then, each player creates a hero by picking a random hero and trait card. The hero card gives you three of your four starting ability cards with the trait card giving you the last. Finally, you take HP tokens equal to the health on your hero card (6 for most characters), 4 dice (equal to the number of ability cards) and a heroism token, and you draw three random and secret battle encounters for the end of each act.

The initial location deck set-up – three locations where the heroes can move and adventure in before the battle phase.

Gameplay is split into three acts, each with two main parts – an adventure portion and a battle portion. The adventure portion is first and it starts by revealing a setting card, placing a certain number of time tokens on the setting card. Then characters can spend their resources (time being an important one) to travel to the different locations and complete objectives to gain loot, items and other benefits. Most actions will cost you HP, have you gain exposed markers (representing fatigue, minor wounds or damaged equipment) or draw an encounter card for its peril section (near the bottom of the card by the skull). A couple of actions are worth note since they aren’t spelled out on any location cards. The first is the Camp action which not only can heal your hero and remove expose tokens, but can level up characters, costing a number of silver equal to the number of current abilities. Next, the adventure action, which, for a secret marker and time token, players draw an event card based on their party marker (either wilderness or mountain). Lastly, you can venture forth which allows you to remove the left most card and add the top area card to the far right of the location track. Then draw an event card for its peril effect, then an event card for the actual event and move the party marker to that card – the only way to explore to Doomrock. Players continue to move and have encounters using their resources until the final time token is spend on the setting card which starts the second portion of the act – the combat encounter!

If you are at the act three boss but haven’t revealed the Doomrock area card, you lose the game immediately, otherwise you fight a battle. The card is flipped and the battle is set up per the instructions on the card. There are a bunch of encounters for each of the three acts – each with their own AI card deck. Heroes can find themselves battling a dragon, dark elf commandos or zombies. Minions and boss monsters are represented by stacked tokens that represent their overall health. There is no tactical board, but there are tactical choices since you can be adjacent to someone (or something) or distant to someone/something. This allows for a fluid amount of groups where enemies and heroes can move around without being overburdened with any map. Every hero has the maneuver ability card that allows them to move adjacent to or from a group (pending they aren’t outnumbered 2:1 by overall enemies to heroes). Some abilities require a hero to be adjacent while others require the hero to be disengaged or distant. Overall, the combat is really tactical and there aren’t a set number of turns for the heroes which can create some pretty powerful combos! 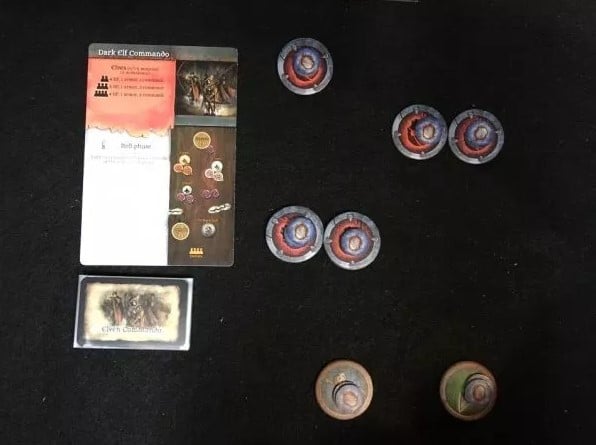 The first battle set-up using unique mechanics each of the five minions is represented with 2 red minion tokens showing that they have 4 HP apiece. Characters (minions, bosses and heroes) can be adjacent or distant giving some tactical choices to the combat.

The battle plays through a series of rounds until either the heroes or monsters are defeated. A battle round starts with each hero rolling a number of dice equal to their number of ability cards. Heroes have three total rolls of dice, keeping or re-rolling as many as they like. Once dice are all locked in, players place those on abilities that are keyed to that number. Each ability card has a number of runes which is the maximum number of dice that may be assigned. A die roll of 1 can be spent for a shield token (blocking 1 damage) and a die roll of a 6 can be spent on a heroism marker (which can be spent to augment other abilities). Some of the ability cards for heroes are initiative enabled and a die can be spent to do that ability before the minions or bosses activate. Once all characters have spent all dice of initiative-enabled actions, the player with the highest threat (thinking squishy non-tank heroes here) must activate two minions, drawing an AI card each to determine the minion’s actions until all minions have activated. All heroes must activate at least one minion even if all minions have gone in the round. Once that’s finished the boss is activated once by drawing an AI card (some bosses have their own AI deck, others can be found on the minion AI cards).

The card, be it an ability card or an AI card, will tell how much damage it does and any additional rules associated with it. When a character is attacked, all exposed tokens are revealed which can cause additional damage, pushback or nothing. Wounds are equal to the initial points of damage plus any modifiers for abilities, heroism, items along with all revealed +1 damage exposed markers minus shields (which are spent) and armor (which aren’t). Heroes remove wounds where minions and boss remove HP tokens. If a character is at 0 health, it has been defeated and removed from the combat. Lastly, the characters activate with any remaining dice that are on abilities. Then a simple cleanup phase takes place and the round starts over with a roll phase. 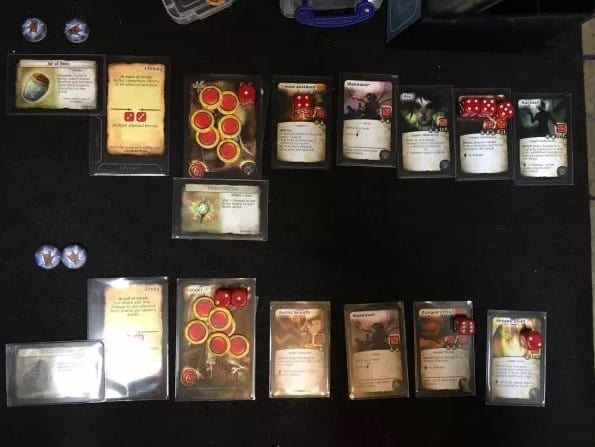 The Clumsy Witch after the first round of dice placement. Note that no twos were rolled so Hex couldn’t be triggered.

Turns go by pretty quick and after a couple of rounds, you are a pro with the battle round order even if you are missing some of the finer points of the strategy of combat. If you defeat the enemies all heroes are healed to 1 HP, gain the rewards for combat (Loot rolls and items) and a new adventure phase begins unless you defeated the encounter of the third act for the victory!

This game is brutal, but fun. The pieces all work together and there are enough cards to keep the game fresh play after play. I will say that the adventure phase with four players can certainly lead to some dull and slow moments since there isn’t a lot of engagement for all players, but the battles truly make up for it. I can’t wait for the next chance to get this to the table, though if I lose to exploding tomatoes (or Shark Tornado) again, I will be upset!

There are some important strategy concerns right from the get go, however, and players must really work together in order to have the stuff they need to battle the encounters! I haven’t been able to get past the Act 2 fight, but I have made it there twice (out of five), so I’m learning. It’s a fun play and I can’t wait to start adding the terrain to the games to see its effect on the battles (the main addition to the game from the expansion).