You are reading
Written Review – Pagoda

You’re an architect, and have been given the news that the Emperor of China is coming for a visit! Prove your skill and worth by building the best pagodas in honor of his arrival. Use resources (cards) at your disposal to raise pagodas from the ground up and earn points based on the floor you’ve worked on, and try to earn the most victory points by the end of the game (when 3 pagodas are finished). This 2 player game by Arve D. Fühler won game design contest for 2 players in 2013 by Pegasus Spiele, and has been brought to the U.S. by AEG. Let’s take a look at this tactical head-to-head game.

Pagoda features some beautiful art on the cover by Arve D. Fühler and contains the following:

The game comes with some extra plastic baggies for storing the components after you’ve removed them from the chit boards. 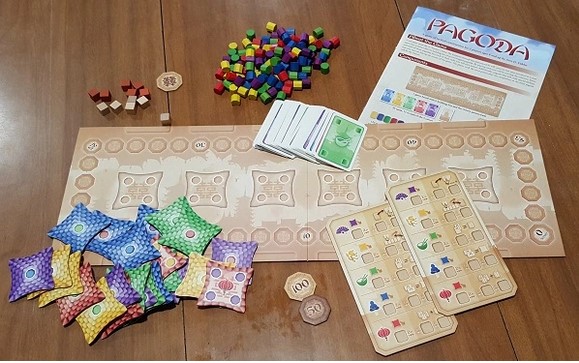 Place the game board in the center of the table, then give each player an architect board and one of the player colors (tan or brown). Put one marker on the 0 space on the game board’s victory point track, and place the others on the 5 left spaces of the architect board. Sort the pagoda tiles by color and place them in stacks on the side of the board, as well as a general supply of colored columns. Give each player one each of the 5 colored cards to place face up in front of them as their open display. Shuffle the remaining cards and put them next to the game board with room for a discard pile. Each player then draws 2 cards for their hand. Place the 50/100 point tokens to the side, and place them in front of you when you pass 50 and 100 victory points, accordingly. First player is the last player who ate with chopsticks! 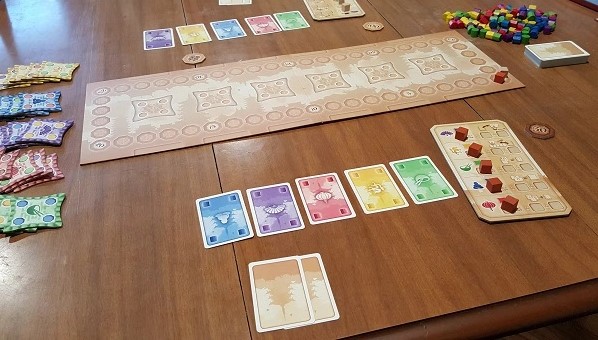 On a player’s turn, they may do the following repeatedly and in any order, with only a few limitations.

At the end of each turn, replenish your cards, starting with your 5 open display spaces, then your hand to 2 cards. Then turn passes to the next player. Shuffle the discard pile to form a new draw pile should the need arise.

It is important to note that a player may not end their turn without building at least one column. If a player finds themselves in the rare spot where they cannot play a column, they may take an alternative turn. To do this, discard any 4 cards and construct ONE column of any color anywhere on the board and gain the usual points, following all normal rules. Turn ends when you replenish cards. The only special abilities that may be used in an alternative turn are Fan (purple) and Dragon (yellow) – the rest are forbidden.

The special abilities are as follows:

The game ends when 3 full pagodas have been constructed. The current player finished their turn normally. If the first player triggers the end game, the opponent gets one more turn for equal number of turns. The player with the most points wins!

Pagoda is wonderfully laid out – the components are of great quality, simple, and beautiful. The game was easy to pick up and learn, and I feel would be easy to teach to other players. Pagoda gets really colorful in the heat of the game with cards and pagoda columns all over the board, but the simplicity of Pagoda’s mechanics make this delightful and not chaotic. 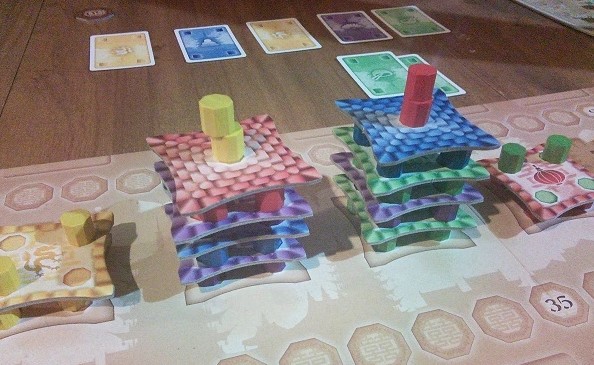 We are big fans of 2 player games around the office since the two of us are the main writers here, and we agree that Pagoda is certainly a keeper. We’ve not kept a lot of tactical 2 player games around because they become dull after a while or we find them to not be fun time and time again, but this was not the case with Pagoda. No, it isn’t action packed and exciting like some other games, but the game really does make you think. In addition to gaining points for what/where you place columns and pagodas, you also have special abilities on your Architect board to consider. These can really change up a round and enable a player to take a whole new approach to the turn. I like that you can only use the ability once per turn, and that it is only usable twice before you place another pagoda tile of that color – it keeps the game balanced and the players on their toes. 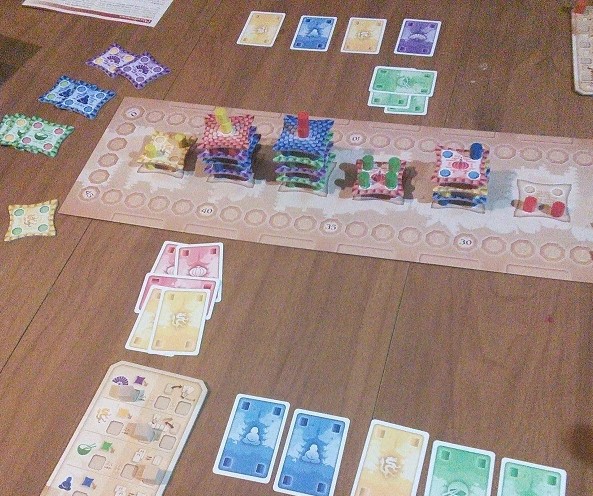 If you like games where you actively work to mess up your opponent or can interrupt their actions, you’ll have to look elsewhere. There isn’t much to do for the inactive player when it isn’t their turn. That being said, turns don’t take a very long time so the downtime really is minimal. I like to plan my next move while my opponent takes their turn, adjusting my ideas as their turn progresses. Maybe I planned to finish 2 columns and place a pagoda tile on my next turn but the other player does that same thing. Now I have a little bit of time to create a backup option for my turn.

The game itself is very smooth and I enjoyed that I didn’t have to spend a lot of time re-opening the rulebook. The difficulty comes in your decisions on your turn. This is a great game to introduce younger kids to tactical board gaming because it has some adjustable difficulty scaling (you can remove the architect board completely or only completing pagodas to the 3rd floor) and the rules aren’t so expansive that young minds would get lost in the details.

It isn’t hard to see why this game won best 2 player game design by Pegasus Spiele – take a visually attractive game and mix it with strategic placement, and you have the blueprints for success. Pagoda has earned a place on our gaming shelf that would be hard to replace. Pagoda retails for $29.99, and we feel that price is well worth the experience inside the package. If your collection needs a tactical 2 player game that scales well across a wide range of ages, consider making Pagoda your next addition.