You are reading
The Five Play Review: Mercs Recon

When Megacon Games started a second Kickstarter that would be a part of the Mercs line of games, I was pretty excited. Ever since I saw the guys at Origins, I wanted to get into the Mercs table top game system and this game looked like it was a going to a quick and easy way to make it happen. Not only would I have a cooperative board game (basically, it’s a dungeon crawl in an office), but the two board games combined would give me four factions for the miniatures game. I decided to back the game – in a surprise move, I included all the factions (the KS deal was too good to pass up, none of my friends will argue when I say I have a problem).

In April, 2014, the Kickstarter finished and the waiting for the game began. This is the blessing and the curse of Kickstarters (among other things). Due to an excessive number of issues with their publishing company, the game was twelve months late. So, when a ‘heavy box’ made it to my door, I couldn’t wait to get through the rules and play some games. These are my thoughts after 5 plays (between 1 and 4 players), but before we talk about my take on the game, let us first go through the components and gameplay.

The components are functional. There is a couple of problems with the components (the dice for one), but the people at Megacon Games have been super cool about these upfront, explained the issues and are working towards a solution. That is what I expect from them especially since their reworking of the Myth rules during their third Kickstarter (Myth Journeyman). The rest of the tiles, cards and player boards are fine and I have really no issues with them. A couple of tiles have some dings and the like, but those are pretty minor. The miniatures are nice and should be a breeze to paint up. The production dings and marks are saddening for me since I like to get and keep my games in perfect condition, but overall the production quality is fine (that’s one of the issues when you deal with Kickstarters).

Since the board is modular, there is a bit of set up before the first turn. The first thing is setting up the office floor. There are three rules that need to be followed, but other than that, you are free to set it up however you like. This is the first of many entertaining parts of the game – setting up the board gives you some very interesting and meaningful choices. Do you have a couple of ways around the map or do you make it a single long winding hallway? Do you put the stairs close to each other or far apart? These choices matter when you get into the swing of things. After the board is set up, players looks at the tiles for agent placement indicators and place the corresponding agent discs (normally there are 2 black disc, 4-5 red and blue discs, but these values can change depending on the choices of the tiles placed in the building).

A standard Setup – Agent discs representing heat signatures in three colors with the Mercs in the elevator ready to go.

Once the board is set up, players decide which faction to play and divvy out the Mercs involved (all games, no matter the number of players have a 5 Merc team). Players grab a set of tokens for each Merc and place them on their player board (Control Point or CP tracker, health – called blood, Ammo – called Attack and reserve action – placed if a Mercs spends CP for that action). The final token is priority which is placed on the track on the board frame. Priority determines turn order and who the Security Forces (SecFor) target when they attack. This priority moves up or down depending on what the amount of CP spent in the previous round, but all Mercs have a starting value. Lastly, place the security track on the 0 (level 1) number and all remaining tokens nearby within easy reach.

Now it is time for the first turn. The first phase is the Agent phase. An Agent movement card is drawn and is read from top-down. First there is a conditional statement at the top which may or may not trigger depending on the board situation. Then agent tokens are moved on the board using the orange and white semi-circles. If there is a choice, a yellow die (called a Light Damage die or LDd8) is rolled and the frame is checked for the movement. Once each color/disc is moved, if any discs are within Line of Sight to any Merc, an event card is drawn and depending on the security level, the agent disc is converted to OpFor (opposition force).

The second phase is the OpFor phase. Starting with SecFor IV (basically Mercs) and moving down to SecFor I (read security guard), the opposing forces move and activate/attack if within weapon’s range. Finally employees move towards the stairs if they are not cowering (if the employee has line of sight to more Mercs than OpFor, they are considered cowering – this condition is only checked at the beginning of the OpFor phase).

The third phase is the Mercs Phase. The Merc with the highest priority takes as many actions as they would like (be that shooting, moving, or capturing employees). The remaining Mercs take their turn in priority order. There are three combine actions that allow a Merc whose turn it isn’t to use CP to activate out of turn with the Merc whose turn is currently being played out. These form the basis of the complex strategy that all players need to being thinking about in each player’s turn as the board and situation changes.

Last phase is the Refresh Phase – a simple phase where the player reset priority based on the amount of CP the Merc ended their turn on and gain 4 CP minus injury penalties. The important part of this phase is the security level increase. For each OpFor that was killed or managed to escape, a die is rolled to see if there is any increase to the security level (5 highly armored and highly armed characters barging into an office will cause some alarms). There are 4 security levels and 11 security numbers – each burst (success) causes the track to go up a number (not a full level). Lastly ongoing effects (like fire) are checked and victory is determined. Otherwise, plays moves to the next turn.

Attacking is fairly straight forward. Each Merc has a dice pool and CP cost associated with each attack. Dice are rolled and bursts are counted. If the target has any armor value, soak dice are rolled. Damage is the total number of bursts minus soak (shields) rolled. Lastly, any burst on the black collateral dice affect all targets in the area (including the area itself, thus the collateral damage discs – referred to CDDiscs). SecFor follow the same procedure without the need to spend CPs – note, the SecFor will always attack the Merc with the highest priority.

The finale is usually (but not always) a Breach and Clear (B&C) event. This the one of those combined actions that was mentioned earlier and three Mercs are needed to initiate one. This is the only way to move into a room that contains an objective, agent disc or OpFor (employees will flee into rooms and out of LOS if they can’t make it to the stairs). As such, you will more than likely have to deal with one of these before too long. The three Mercs that spent the CP and all characters (other Mercs and OpFor) adjacent to them are pulled into the B&C event. Each mission card has the set-up on how enemies are placed. Then begins a mini dice game to see who can roll more successes. Starting with the Merc with the highest priority, each Merc attacks with their lowest CP costed attack. Then the OpFor attack. This goes back and forth until all Mercs have gone. If the OpFor have more successes than the Mercs, they win otherwise the Mercs win. There are even more tactical considerations since order can matter. 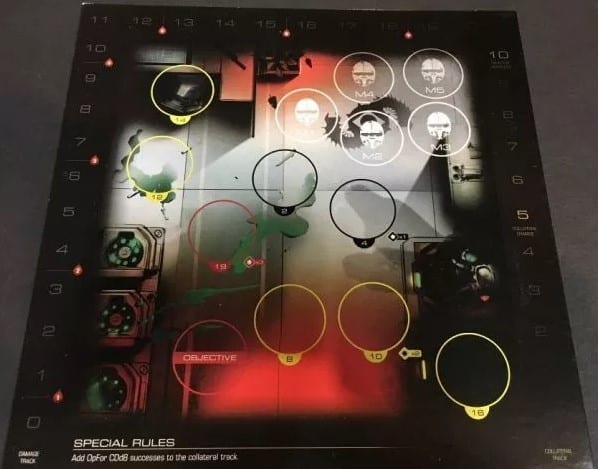 The Breach & Clear (B&C) Tile – A mini game that represents any time the Mercs breach a room.

My Thoughts – What Do I think?

The game is a lot of fun. It has a great deal of strategy and there is a lot of replay value. That being said, there are a couple of issues with the game. As of right now, there is only 5 Mercs per faction and as such, some characters are not really usable for all missions. This isn’t such a big deal when a player is controlling multiple Mercs, but the Heavy isn’t going to be much use if you aren’t supposed to damage the building and if that Merc is only one a player is controlling, they might have a really boring experience! Secondly, I can’t tell you the number of times that I/we have lost because the SecFor have spawned and then moved into position and destroyed either the ability to get to the objective or damaged the entry way to the objective that keeps the Mercs from being able to initiate the B&C. Honestly this might be a move on my gameplay and not necessary the game itself, but the shotgun wielding SecFor 2 can (and have) shown up in the stairs and opened fired at a Merc causing a loss due to damage to the building.

I recommend that you try before you buy, this might not be for everybody! I, however, have enjoyed and will continue to play it in my attempt to get my first win (I have finally completed a successful B&C). Perhaps that is all the review you need – a cooperative game that I keep coming back to even after huge and unpredictable failures.