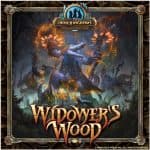 One of the most successful games of last year’s Gen Con was an adventure board game by the name of The Undercity, which came to us from our friends at Privateer Press. The game pits 4 players into a cooperative adventure where they seek out missions that take them in the underbelly of the Iron Kingdoms. While we’re still working on our full playthrough of the game for a review, some news came from Privateer Press earlier that got our ears perky: the company has announced Widower’s Wood – the second in the line of Iron Kingdoms adventure board games, and it’ll be coming to Kickstarter on February 16th, just under a month out.

Just like with The Undercity, Widower’s Wood will be a cooperative board game for up to 4 players as you take the role of a unique hero set within the Iron Kingdoms. The board layout will be the same as The Undercity, with a singular board that will make use of different tiles for setting up various scenarios. This is where players had some issues with The Undercity, so I’m hoping to see some design improvements on the aesthetics of the tiles. In the announcement for the game, Simon Berman takes note to mention, “We’ve worked carefully to make the board and tiles thematic, lush, and engaging.” Simon’s a man of his word, and this fills us with excitement towards seeing the components for the new game.

Privateer Press is quite a successful company, what with their widely-popular Warmachine and Hordes tabletop wargames, so why would they go to Kickstarter? Simon takes time to answer this question in the game’s announcement:

We’ve been producing great games for over fifteen years now, and jumping into the crowd-funding arena was not something we decided lightly. While Privateer is well known as a publisher and manufacturer of miniatures games, our board games—which we are just as passionate about—haven’t reached as wide an audience as we believe would appreciate them. So, after much consideration and discussion, we concluded that Kickstarter presents the opportunity for us to raise awareness of our board games and to hopefully get them into more hands than we have been able to through traditional marketing. Plus, it gives us a chance to give our gamers what they want: tons of extra miniatures, extra scenarios, extra tiles, extra everything!

This line of thinking makes complete sense. We’ve seen some amazing projects come through Kickstarter, and when you can accurately gauge your audience’s interest in your project, you can set realistic stretch goals and offer tons more than you could by taking a shot in the dark. You can see some preliminary designs for model sculpts on the Privateer Press Insider post announcing the game, and with what’s available to look at I’m excited to see what a Kickstarter would bring. How about stats and cards for specific models for use in Warmachine/Hordes? What about create-your-own characters for the board game using Warmachine/Hordes models? The possibilities are near endless! We’ll be posting our review for The Undercity soon, so keep an eye out for that as well as more news on Widower’s Wood as it breaks the surface!