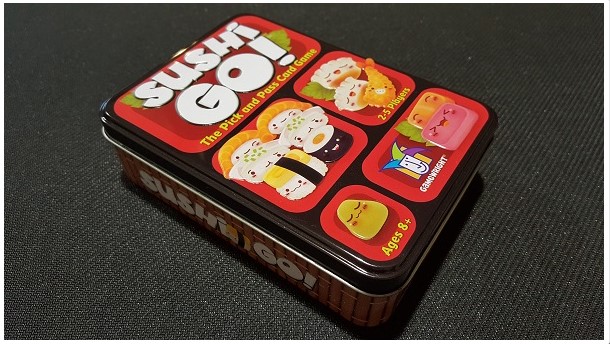 Set-collection games are pretty fun, as they are usually themed well with art. Sushi has gained popularity over the last decade and so has the whimsical and cute artwork that often surrounds all things sushi. The cuteness did not escape when the folks at Gamewright decided to make a game based on an HQ break room favorite! Sushi Go! is a pick-and-pass drafting card game loaded with plenty of fresh selections to satisfy any sushi cravings. Let’s take a look at this little card game and what it has to offer.

Sushi Go comes in a small tin that looks similar to a bento box and contains: 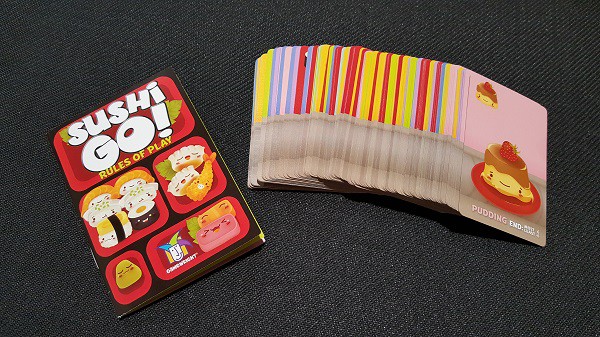 Shuffle all the cards and deal depending on the number of players:

Place the rest of the cards in a face down pile in the center of the table. Keep score on a separate piece of paper for each round.

The game occurs over 3 rounds. First, all players choose 1 card from their hands to keep and place it face down in front of them, then reveal.

Note: A player that has played a Chopsticks card in front of them may say “Sushi Go!” as all players are about to reveal their chosen cards (including player with chopsticks). This player may then take a second card from their current hand and place it face down, then reveal as normal. The Chopsticks card is added to the hand that will be passed.

After revealing, pass the remaining cards in hand to the player on the left. This continues until the last card has been passed : the player receiving the last card places it face up in front of them, then scoring occurs.

Easiest to score cards are Maki rolls. Count up the number of roll icons on the top of the Maki cards : whoever has the most icons gains 6 points, splitting the score for any ties. Player with the second most Maki cards gains 3 points. Chopstick cards score nothing.

A single Tempura card scores nothing, but 2 will score 5 points, and multiple sets can be scored. Sashimi cards must be scored in sets of 3 for 10 points – 1 or 2 cards score nothing. 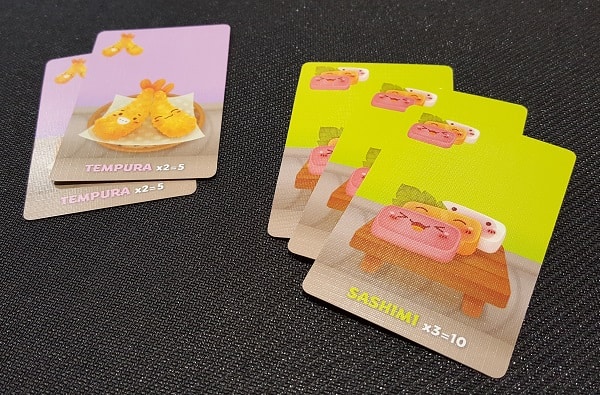 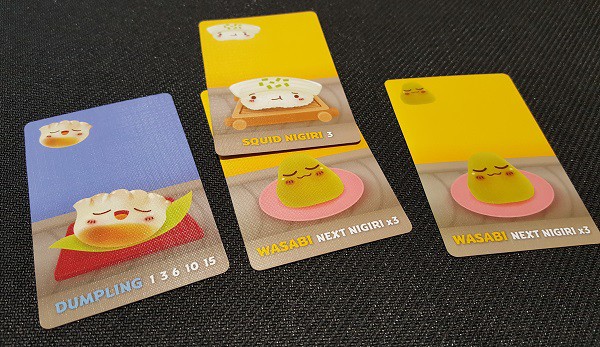 Once scoring is done, write down each player’s score for the round, and discard all cards face-up into the discard pile EXCEPT for Pudding cards (we will address these shortly). Deal each player cards according to the number of players for a 2nd and 3rd round.

At the end of the 3rd round, players count the number of Pudding cards remaining in front of them. The player with the most gains 6 points (splitting for ties). The player with the least loses 6 points (splitting for ties). In the rare instance where all players have the same number of pudding cards, no one scores. However, in a 2 player game, no one loses points – only the most Pudding cards gains points. 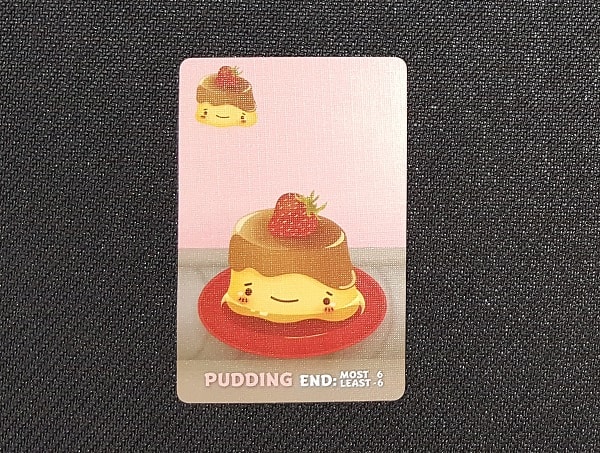 Whoever has the most points after 3 rounds and the Pudding scoring is the winner!

I found this game to be just about as addicting as real sushi is. It is fast, easy to learn, and requires you to be on your toes. Two player games gave me the best chance at strategy because I only had one other person to worry about : five player games were just chaos, but in a good way. I knew what at least one person was getting when I passed the hand off, but I really had to look at not only my game board but the cards that my opponents had played. Sometimes making the call between X card being good for me but not wanting to give another player Y card was rough. 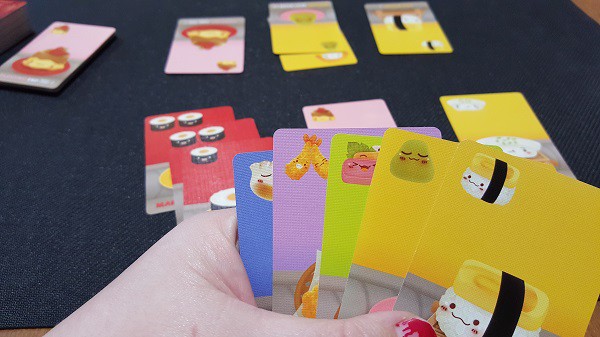 The age suggestion for this game is 8+ and I feel that’s pretty accurate. Children younger than 8 may not remember the rules or fully understand the mechanic, but since every kid is different, you’ll know your kids better than anyone.

My only complaint about Sushi Go! is that the cards are thinner than I’d like them to be. Because of this, I may eventually sleeve them, but I would have to remove the insert in the game tin to store them. The insert fits the cards snugly as its so they don’t slide around and make a mess inside the tin. That being said, the tin itself is great – I love that it looks like a bento box! 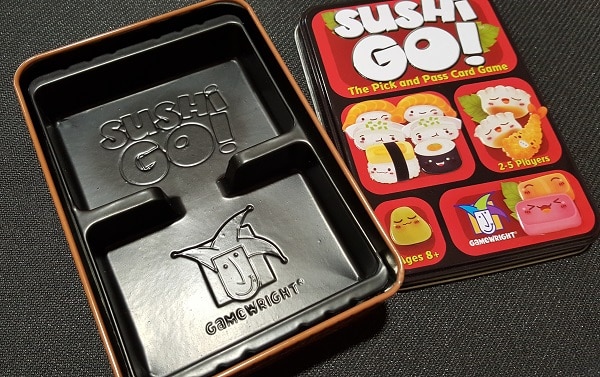 My favorite card by far is the Chopsticks. They saved me (and my opponents) many times, and I use them at least once a game. It was great to bulk up on Maki rolls, or snag the last 2 Sashimi cards I needed. They aren’t worth any points and I have sometimes ended up with the Chopsticks as my last card, but it rarely hurt my score for the end game.

The nicest thing about Sushi Go! is its size and time consumption. You can pull it off the shelf, have the cards shuffled and dealt and be playing within 2 minutes. It doesn’t take long so its a great game to pass time in between games, waiting for appointments, or any free time that you and at least one other person have. This also means that playing a rematch (or 3) won’t take all night long!

Sushi Go! retails for $14.99, and I think that’s a fair price. There may not be a lot of stuff in the box, but the game is fun and light-hearted, and have we already mentioned adorable? This would make an excellent card game for a family looking to build their game library – a simple pick and pass game with just a touch of “take that!” as the kids get the hang of it. Or, if you’re just wanting a light, quick game to introduce someone to the drafting mechanic, this would do the trick (and possibly get them addicted!).