You are reading
Warmachine – What is a Unit? 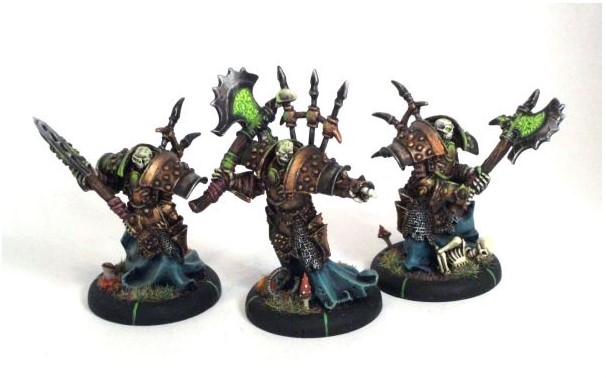 Welcome back to another Warmachine guide post! We’ve already talked about warcasters and warjacks, so now it’s time to highlight yet another important cog an any Warmachine army – units! Units are groups of infantry-level models that activate together on the battlefield. Some units act as cannon fodder, while other units are like well-oiled machines in their own right making a move for the kill. Each faction has their own take on units, and while not as diverse as warjacks, units can work together well to accomplish a goal. Most units come with several models, sometimes containing up to 10 in one unit. Each unit is primarily made of a handful of grunts that are commanded by a single leader. The leader takes point, issues orders, and keeps the grunts in line when they need a’whippin’.

When it comes to units in the game’s history, each unit will have their own story for each faction. For example, Khador has a unit of specialized riflemen called Widowmakers. These elite sniper troops are trained rigorously to hone their skills with a rifle. They excel in long-range combat, easily taking out enemies that aren’t protected well. They’ve even been known to down ‘jacks with well-placed shots from cover. Some unit’s history remains shadowed within the game’s fiction, and their focus is simply utility for gameplay. 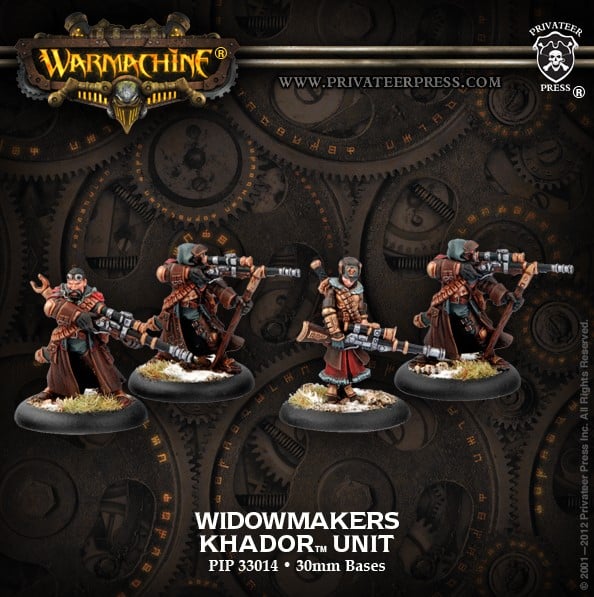 When it comes to gameplay, units can do a variety of things. In most units, each model can only sustain a single wound, meaning that a successful AOE (area of effect) attack could potentially wipe an entire unit off the battlefield. However, if coordinated correctly these units can out-maneuver slower models such as ‘jacks and other units to stay alive. When activating, each model in a unit can pretty much act as an individual for the purpose of movement and attacks. The only restriction that comes with units is that each model needs to stay within the command range of the unit leader, or they won’t be able to receive orders such as running or charging. At the same time, however, units can run as a pack and some have the ability to perform combined attacks, whether they be ranged or melee attacks. When you perform a combined attack with a unit you choose the origin attacker (a single model) and roll its base attack dice (ranged or melee), adding to it a +1 to hit and damage for each other model participating in the attack. Usually for one of these types of attack you’d want to choose the model with the highest MAT/RAT (melee/ranged attack) and POW (power) to lead the attack with other models supporting them.

Cygnar’s Stormblade Infantry are masters of the Combined Melee Attack.

On the opposite hand, some units work well to make their attacks individually, especially when they have support. Take, for instance, the Bane Thrall unit from Cryx (pictured at the top of this post). These guys can be real power houses when fielded correctly. These guys have an ability called Weapon Master on their axes, which means they automatically roll an extra d6 on damage rolls. If their leader orders them to charge, they’ll be rolling 4d6 damage on their first attack, so long as it hits. If you field 10 Bane Thralls, get them into position, make the charge order, and can swing off 4-5 attacks individually with each Thrall, you’re in some good standing to deal some damage.

Finally, units can be expanded on a bit by adding Unit Attachments (UAs). When you add a UA to a unit you’ll be picking up an extra body or two and usually gain a buff to the unit that makes them perform better. For example, the Flameguard Officer and Standard Bearer UA make the unit of Temple Flameguard much more deadly on the battlefield. First of all, the Officer acts as a leader, but has better stats. While fielding the UA along with the unit, the entire unit gains Terror and Continuous Fire on their weapons for so long as the UA is still on the field with them. Terror forces enemies that come into melee range with the unit to pass a Command check or flee in agonizing fear. Continuous Fire adds the Fire effect to all attacks made by the unit, meaning that enemies hit by attacks are, well, set ablaze with the flame of Menoth. With the UA added to the Temple Flameguard it’s possible to put these guys in Shield Wall (basically locking shields, coming into base contact with one another, and gaining a HUGE armor boost) and trod them up a lane, forcing anyone they come on contact with to possibly flee in terror. Unit Attachments can make or break entire units, being the one condition that leaves them fieldable or not.

Feel the flaming might of the Temple Flameguard Officer and Standard Bearer!

Units are all-encompassing infantry that can get nearly any job done if fielded with strategy in mind. Each faction has a unit that helps add to their flavor, and using them can really change up your lists for each game. Experiment with different unit combinations and you’ll soon have an army that’s ready to rip through some metal. Next we’ll be looking into solo models, so keep that cortex pointed right here!

Spartan Games On Board to Produce HALO Miniatures Game with Microsoft