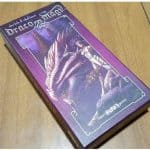 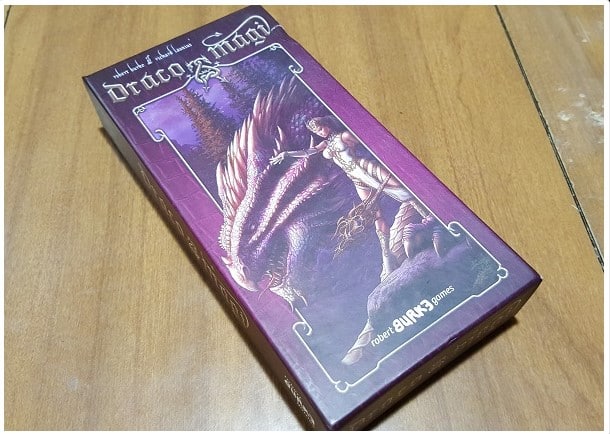 The Dragon King has died and you are one of two dragon mage acolytes who must prove your mastery to take your place as the new Draco Magi. Command dragons in battle and acquire gems as proof of your victories – once the right gems are collected, you will earn the right to take the crown.

In February of 2014, a successful Kickstarter campaign that attracted a lot of attention funded and launched the birth of Draco Magi. This 2 player card game would pit 2 players and a handful of dragons against each other in a fight for battlefield supremacy through a variety of tricks and battle tactics. While the stunning artwork attracted many backers, the game itself was new and intriguing. So, did the game stand up to the hype? Read on to find out!

Draco Magi comes in a small rectangular purple box and contains the following:

The contributing artists to the game – Kerem Beyit, Ertac Altinoz, and Emiliano Cordoba – all put great effort into making the dragons on this world fearsome and beautiful.

Here is a photo of the setup in the rulebook, and a photo of our setup with the Draco Magi playing mat (sold separately). 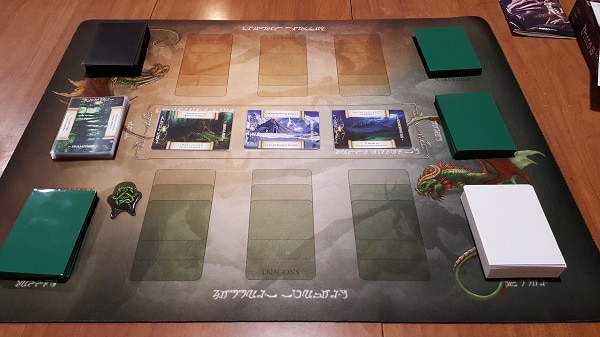 The oldest player takes the first player marker and chooses their color, then takes the dragon and battle decks for the color they chose. Shuffle the advanced battle deck and leave these to the side for now. Shuffle the battlefield deck and draw 3 from the bottom of the deck. These cards are double sided and come into play in the same orientation as they’re drawn – they can be flipped during battle by dragon abilities. Players shuffle their dragon and battle decks separately and place them face down beside them.

After this is done, shuffle the discarded cards back into the advanced battle deck, and each player will shuffle the 2 acquired cards into their battle decks…and you are ready to begin.

Player one draws battlefield cards from the bottom of the deck until there are 3 cards in play. Please note that this phase is here for future turns – you will skip this phase on the first turn since you’ve already done this in the setup phase. 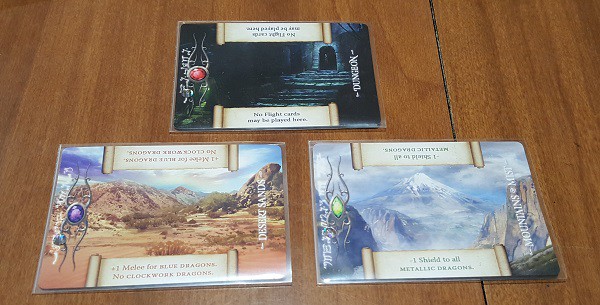 Draw cards from dragon decks until each player has 8 cards in hand. If at any time you cannot draw 8, shuffle the dragon discard pile to form a new one.

Starting with the first player, each player takes turns placing one dragon card at a time on the battlefield – they can be placed at any of the 3 battlefield locations, and the following rules must be heeded: 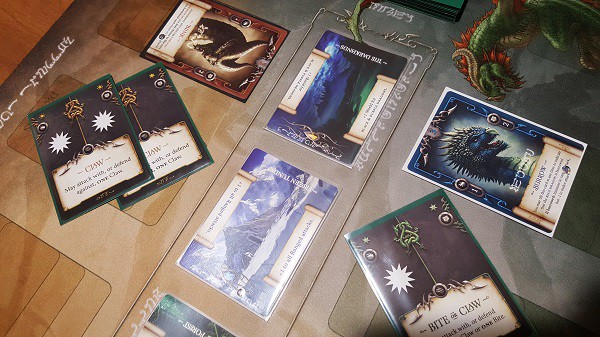 Example of a ranged attack : Green’s dragon has a ranged value of 1, and draws 1 battle card. The ranged symbol on the upper left side of the card shows one burst, for one hit. The Gold dragon has a defense of 2 and draws 2 cards – the first card has no burst on the defense side, but the second saved the dragon from being eliminated.

Once both players have placed all dragons or placed the maximum number of dragons (9), they must pass to end the command dragons phase. If any dragon cards remain in hand, they are placed face down until phase 5. 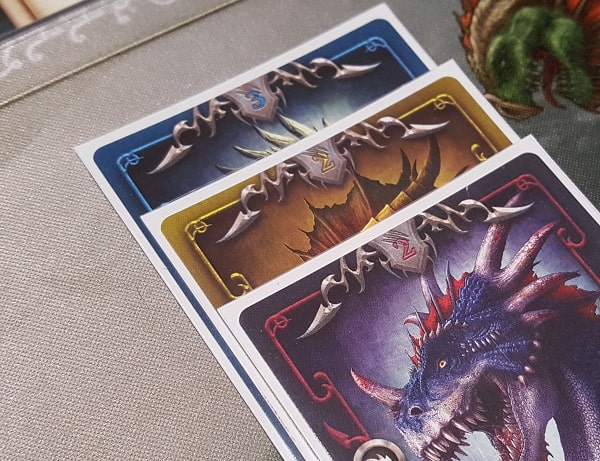 Green player will draw 7 cards for the melee battle. 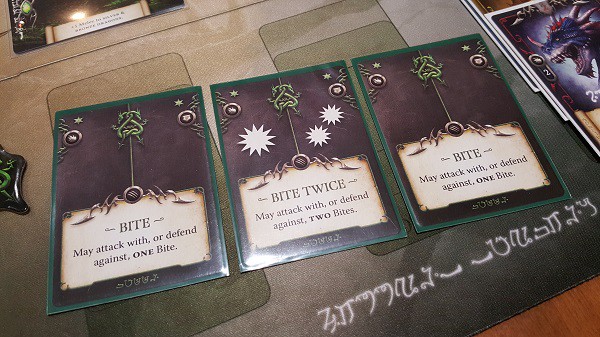 Green player drops a total of 4 bites as their opening attack. These cards can be played in a combo because they all share the star symbol at the top of the card.

Gold player defends the attack in full with 4 separate bite cards. These do not have to share a sun/moon/star symbol for defense. A Bite Twice card can cover defense for 2 individual Bite cards, as well. 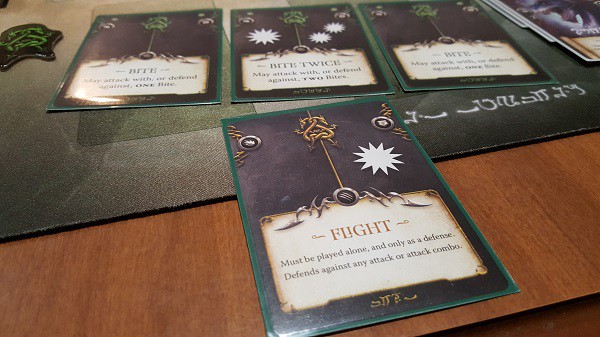 Or…a Flight card can be played to avoid all.

If either player has dragon cards remaining, they may keep or discard as many as they’d like. Each player draws one new advanced battle card for their deck and reshuffle their battle decks, including the discarded cards. Start back at Phase 1 and repeat until a winner is established!

To win the game, a player must collect 3 gems of different colors, 3 gems of the same color, or 4 gems of any color.

In The Flurry Of Battle

I was a fan of Draco Magi way before it ever entered my hands – I had been eyeing it on Kickstarter and loved the artwork as it was posted there and on Facebook. I finally got my hands on a copy at BGG.Con and even got a demo before I left that day. Strangely, this is one of the few games I’ve played that a demo was actually more confusing than just reading the rulebook. So, when I got home, I was left spinning a little in worry that the rulebook would also confuse me. This was not the case to my surprise, and upon reading the rules, I was good to go.

The placement of dragons is very important for a few reasons. Some of the dragons have key abilities like they can’t be targeted by ranged attacks, have extra power in certain locations, or are boosted if they are played with specific dragon types. Also, the battlefield locations often say that that a particular dragon type gets +2 attack or +2 defense, or something along those lines. The ability to flip the battlefield locations is key, too. Some of them have the same location rules on both sides, but others can drastically change the outcome of the battle if flipped at the wrong time. Each location has a different colored gem, so flipping locations most often will be to the advantage of the player doing the flip, whether it is a gem they seek or to hinder their opponent.

I’m not really sure that in the game I get the “feel” of being a dragon acolyte through the game except for directing placement of the dragons. The melee itself is more determined by the dragons, as I don’t really see a human standing back and giving them orders like they were pocket monsters. The dragon theme, though, is heavily seen throughout the game. The framework on the battle cards has a celtic-type feel but in dragon knots, the dragons themselves are just beautiful.

Draco Magi absolutely has the potential to be different every time – even if a player has similar dragon card draw, the battle cards can completely change the outcome of a game. We’ve played many games where it looked like I was going to have a win because of dragon placement, but my battle cards let me down, allowing my opponent to come out on top. That isn’t to say you can just play cards wherever and expect a win – there is still a heavy element of strategy. Each player has the potential to set up some heavy combo attacks, and while they may be hard to defend against every time, if played right, the defender can come out on top as an attacker later in the game.

Let’s say in battle, that Green player plays their Two Claws Advanced Battle card. Gold player can only defend with one Claw card. Since one attack was left undefended, Gold player would discard the top dragon at that location.

While they seem to be unavailable for purchase at the time of this review, I do feature in some photos in this review a special playmat for the game that has designated spaces for how the game is meant to be set up, which is handy and well organized. If you are able to find one of these mats (18″x24″), it would certainly enhance your game.

Draco Magi retails at $24.99 and we believe that it is well worth it. Once you know how the battle cards work, the game is smooth, the cards are well laid out, and the design and art are just fantastic. I am personally a dragon lover, and the theme of the game was so powerful, I really felt like I was in the heat of battle, making quick decisions on how to come out of a battle on top, or at least causing as much damage as I could if it was a losing fight. I enjoy Draco Magi whether I win or lose, and greatly admire the time that was put into this. If you’re looking for an innovative 2 player card game, I’d highly recommend Draco Magi as your next game shelf addition.