You are reading
Written Review – Valley of the Kings

You’ve heard it over and over that once you die, you can’t take it with you. However, the Egyptians believed otherwise and you can choose what you’re taking in Tom Cleaver’s Valley of the Kings. Play a pharaoh preparing  for your inevitable burial by stocking your tomb with food, amulets, statues, canopic jars, and more. Valley of the Kings is a unique deck-building game in the way players may choose cards and how to entomb their treasures. Score the artifacts in your tomb at the end of the game and the player with the most victory points wins the game!

Valley of the Kings comes in a small box and contains the following:

The artwork for the game is done by Banu Andaru and keeps with the ancient Egypt theme.

Draw 1 card from the stock and place it face up to make the boneyard. Then determine who is the first player (last player to visit a museum).

Before we move into turns, a quick discussion on the pyramid. When you purchase a card from the pyramid, you must choose one of the cards from the base of the pyramid (bottom 3 cards) unless you have played a card that says otherwise. When a card is purchased, the pyramid “crumbles”, and the card diagonally above the empty space will fall to the base. If a center card is removed, the player that purchased that card chooses which of the 2 on the next level up will crumble down.

Now, turns. Each player takes turns until the end of game (no cards left in stock or pyramid and all players have taken an equal number of turns).

First thing is that the active player will play cards. This can be done by buying a card from the base of the pyramid with the gold from the cards played from their hand that turn, executing an action on a card (a card can only be used for an action OR gold value, not both), or entombing a card. You may do any of these actions in any order, but you may only entomb a card once.  Entombing means that you place a card into your tomb for end-game scoring.

After all actions have been taken, discard cards in play and any remaining in your hand and may be discarded in any order. These go to your discard pile, not the boneyard. Then the pyramid must be rebuilt. If no changes occurred in the pyramid during your turn, sacrfice any card in it and put it on top of the boneyard, then crumble as normal.

Draw a new hand of 5 cards from your draw pile, shuffling your discard pile to form a new draw pile if you ever must draw and no more cards remain in your draw pile. Then, the next player takes their turn.

When scoring at the end of the game, the starter cards are just added up, but the sets of cards score a bit differently. See the rulebook for the chart, but you will essentially take the number of cards you have in a set and multiply it by itself for your score. If you have 3 amulets, you will score 3×3 for 9 victory points for the set. Player with the highest score wins!

Managing How The Pyramid Crumbles

Most of the deck-building games I’ve played in the past were larger box games that required a lot of table space up until Valley of the Kings. I was curious as to how it’d play out with no board and no excessive piles of cards to purchase covering the table. The theme is very strong in this game from the art to the pyramid board format to the entombing. A lot of thought was put into this travel-sized game and it shows when theme and gameplay blend so fluidly.

I like that you can actually “see” and sometimes control how the pyramid crumbles, setting yourself up for success in future turns or putting your opponent at a disadvantage by ensuring that cards they want stay off of the base of the pyramid. There are some cards that allow you to force the pyramid to crumble beyond normal turn movement or move cards to the boneyard. That way the game has an element of strategy beyond just purchasing a card before someone else can. It is about personal hand/deck management as well as manipulating what your opponent may or may not be able to purchase.

Taking entombing actions must be done in a timely manner as well as you are only allowed one standard Entomb action per turn. There are some cards that allow you to take additional entombing actions, too. Deciding what cards to keep in your hand for purchasing/play tactics and which ones to go ahead and entomb for end-game scoring can be difficult the first time or two as you learn what the cards do and the difficulty of accumulating certain card types, but after, you’ll get a knack for what is best to hold on to, and when is best to entomb them. 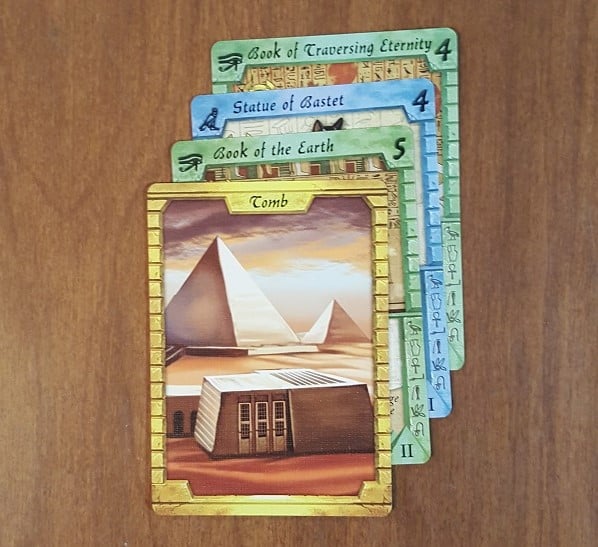 Valley of the Kings is very replayable – with a shuffled deck, there won’t ever be two games that are the same. As with many other deck-builders, there are certain items I *like* collecting (statues!) but  I’ve played games were I never had one statue in my deck. I like that not only is the set-up quick, but it offers the ability to focus on a variety of card types so that I’m not stuck in a cycle of favored cards. Anyone who likes Egyptian themes would appreciate the beauty and mechanics of this game, and I think deck-builder fans will find it refreshing.

The only thing I don’t like about it is a personal preference – if you play a card with a 3 gold value and purchase a card valued at 2 gold, the remaining gold disappears and you can’t use it for additional purchases. I like having a “pool” to purchase with, but even so, that adds to the strategy required to play the game – as it would be disappointing to have to pay for a 1 gold card with a 3 or 4 gold value card.

Valley of the Kings retails for $19.99 and while the box isn’t large, there’s a lot of fun packed in it. I find myself conflicted as to whether it is worth that much, but it has a lot more depth than some of the other small box AEG games so I can’t say that the price isn’t justified. I do think this would make a wonderful gift for an ancient Egypt lover and a great way to break someone into gaming!