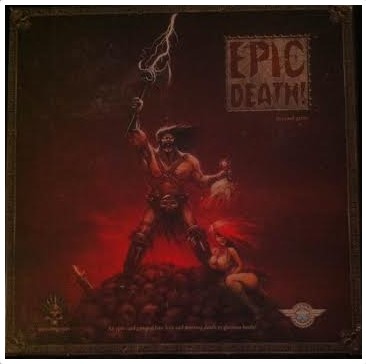 Wow it’s been a while guys, sorry for the absence, but I’ve had some personal issues to work through (being fired, a car accident, being fired from a second job, etc). That said, I finally got an opportunity to play a game I’ve been pretty pumped about playing, Epic Death. It’s a lot of fun, similar to Munchkin, but very VERY different, but more on that later. It’s definitely a great competitive party card game, and if you’re looking for a game to replace Munchkin, (because you’re like me and you play the same games a million times and get super bored) then this review will give you any insight you might need. 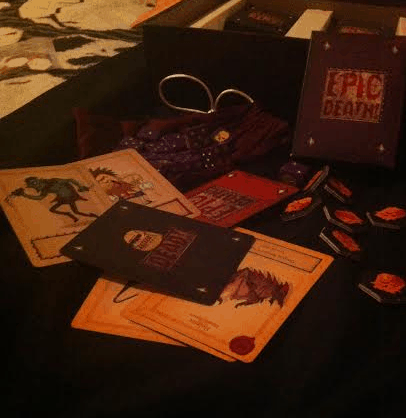 Most of the components of the game are very nicely made.

Begin by shuffling the Epic Quest cards and place them face down between the players, then shuffle the Quest cards and place them atop the Epic Quest cards to form a single quest deck. Shuffle the Loot cards and Fate cards, forming two separate decks with discard piles for each. Then place the 16 dice next to the decks in the center of the game. Shuffle and split the Adventurer cards into four sets of five (or five sets of four for 5 players), and hand out one party to each player. Each player lines up their party in front of them. Deal five Fate cards to each player, you may look at your own cards here. Then decide who goes first (I like the rules’s way, the person with the most epic face goes first) Each player takes a turn, which consists of four phases. The first phase is the Quest phase. The active player draws five cards from the top of the deck and places them face up in the center of the play area. They then pick one Quest from the Quest line. (when you run out of Quest cards in the Quest line, draw another five cards as described during setup and continue play) Then comes the Fate phase. Before the active player can attempt a quest, every other player gets to play a Fate card which can either add dice, subtract dice, or cause a number of other hindering or helping effects for the player. (Note: If you fail a quest and have less than 5 fate cards you may draw back up to 5) Deadly and Resurrect cards can only be used on the Active players Adventurers and only one of each type may be played on an active players quest. Only adventurers with a score of Epic or Fail may be targets of these cards. Deadly cards will render the Adventurer “dead” upon the failure of a quest, and the Adventurer is turned over to reveal “Dead” on the back of the card. If they succeed, however, the deadly card is discarded with no effect. Resurrect cards have the inverse effect. Upon the success of a quest, an Adventurer can be brought back to life using these cards. Active Players may play these cards on their own adventurers if they wish.  After the Deadly and Resurrect cards have been played, you may play “Play before roll” Fate cards. Players may use as many fate cards as they wish, and Multiples of the same card may be used as well. All modifiers for these cards are cumulative. The Dice Phase is next. A players Dice pool always begins at 10 dice but can be modified by  and +/- dice cards. The Player first checks to see if they have enough dice to complete the quest, if their dice pool has been lowered below the number of Victories required by the quest card, their party has automatically failed the quest  and the active player must place the card under an adventurer of their choice )or the Adventurer targeted by a Deadly card if one has been played.) The Rolling phase is last on the list, where players roll their remaining dice, and checks to see if they succeed in their quest. If players roll equal to or higher than the number of victories required, they succeed and may draw cards listed under “Rewards” on the quest card. After the Rolling phase however, players may play any “Play after rolling” cards which may affect the outcome of the active players roll. Adventurers can only carry a one of each type of loot class (Helmet/Armor/Weapon). If an Adventurer gets a full set (three loot card of the same set name) they recieve 400 EPIC when scores are tallied. Loot in play can only be swapped between players using the loot envy card. 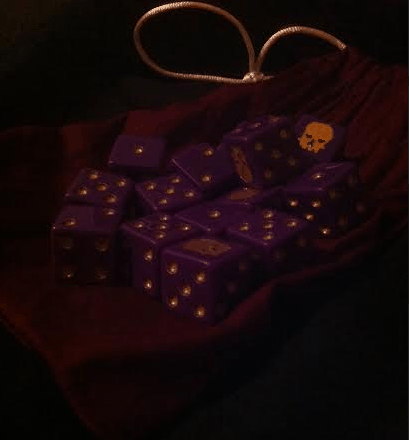 Once you have completed all the green Quest cards, your adventurers move onto Epic quest. This is where the game flip flops on itself. Your Adventurers now want to meet death in glorious battle, and as such, there is no fail score, if a player fails an epic quest, they must choose one of their adventurers to kill and the card is placed under their adventurer adding to their epic score. Only dead adventurers count towards your final score, so you’ll want to fail as much as possible here. If a player is lucky enough to roll a number of victories EXACTLY EQUAL to the requirements on the epic quest card, they have achieved an EPIC DEATH, simultaneously completing the quest and dying heroically in the process. In this case, place the card under an adventurer as normal but face down denoting an epic death. This card is now worth double. The game ends when a player is able to kill their entire party, or when all epic quests have been completed. Only cards under dead adventurers count towards the final score. Players count up all of their epic points from completed quests, loot, Epic quests, and epic deaths, then take away any Fail scores they have accumulated. the number left over is your final score and the player with the highest score wins! 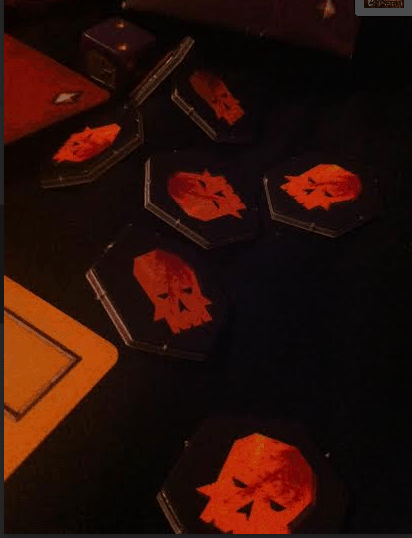 This game is a LOT of fun. It’s one of those games where you try to mess up plans for your fellow players for no real reason whatsoever, much like Munchkin, however I found this game to be so much more fun than Munchkin. Epic Death! actually got one of my friends, who absolutely hates board games, to play and laugh because after seeing us play it once, he understood it, and wanted so badly to join. In fact, it was him who ended up winning the game! It’s such an easy game to understand and it takes maybe 30 minutes total to run through the game entirely. It’s something to break out at a starter to your game night, something easy and fun to get people in the swing of things before moving on to other things. My starter game used to be Cards Against Humanity but I’ve definitely changed things up now, adding in Epic Death! instead.

I will say however, that through all the fun we had, there are still some problems with the game. Some of the instructions on the card can read a bit confusingly at first, and some slightly contradict with what the rules say so it confused a few players at first until they got the hang of things. I also personally got annoyed with the loot system and how you can only change up the armor you’ve equipped with another person with a card. I felt that trading with other players should have been a bit more open and a little less dirty because my group got so annoyed because there was 1 piece of armor that kept getting passed around the table all night with that card. If we were able to just trade among ourselves, I found that we wouldn’t necessarily be “just getting what we want” in terms of cards, but it adds another strategy on of collecting cards other people need to exchange for your own needs, and otherwise players were free to say no if you didn’t offer up enough knowing you wanted that loot for your set, and maybe asking for 2 cards instead of just one. All in all, this game is a LOT of fun and I highly suggest giving it a try if you have the chance, I’d rate this game an 8 out of 10! Well until next time guys , may your  dice roll 20’s and your DM be merciful!!