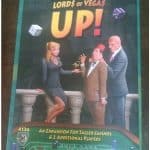 You are reading
Written Review – Lords of Vegas: UP!

I’ve always been a mid-level risk taker. I ride motorcycles but I don’t bungee jump. I try new and exotic foods, but I always wear polo shirts. I play some games cautiously while others I jump in with both feet and pay no mind to where I might land. Lords of Vegas: UP! from Mayfair Games allows you your choice of strategy while keeping to the Las Vegas theme perfectly.

Lords of Vegas: UP! Comes in a simple but functional box. However, if you’re anything like me, you’ll almost certainly not use it as you’ll likely combine its components with your full box of Lords of Vegas.

Lords of Vegas: UP! Is an expansion to Lords of Vegas, from Mayfair Games and designers James Ernest and Mike Selinker. These two also designed this expansion and the cohesion to game play does show through. In UP! players have the opportunity to further their fortunes while playing Lords of Vegas with even grander casinos than usual. Please refer to the review of the core Lords of Vegas for how to play.

While UP! does add the possibility of two new players – taking Lords of Vegas from a four-player game to a six-player game – its core value comes in the form of forty-eight casino floor tiles. Lords of Vegas is, at its heart, a territory-control game. You stake your claim and build casinos in locations and colors that you think will pay off the most in points and money.  Because of this, building space is the hottest commodity in the game and the object of greatest desire to players. Thanks to the casino floor tiles added by UP!, players now have another option…build up!

Instead of only building an addition to your casino in an adjacent space, UP! allows players to increase the height of their casino by adding another story or level. Simply place one of the new casino floor tiles beneath your casino tiles and watch it rise toward the sky! The number of levels allowed is determined by the number of players in the game.

When you build a casino up using the new tiles, you score more points when your casino is scored. As in the regular game, your casino isn’t scored until a card of matching color is drawn by any player. Money is still awarded as usual, based on the number of pips showing on the casino’s die, but with the UP! expansion, players score points based on the how tall the casino is. For example, a single space casino is normally worth one point. If you add one level to it with the expansion tiles, it’s now worth two points when scored, three with three tiles and so on. So a four-space casino with even one riser tile each suddenly turns into an eight-point casino!

The risers cost a whopping $15 million dollars (in-game currency) per tile, but with the scoreboard constructed to only allow points with ever-increasingly large casinos, building up becomes a fairly cheap way of getting more points. What’s the catch? Well, you can’t build lopsided casinos, can you? So when you want to add risers to a casino, you have to add risers evenly distributed across all spaces of the casino. So that four-space casino we talked about? Well, to raise that one level costs $60 million!

Is It Worth The Gamble?

Our  usual gaming group tried UP! because we liked Lords of Vegas and wanted to see if the expansion changed much. Little did we know! It turned a game we liked into a game we LOVED. We now never play without it. It allows for different strategies than with the stand-alone game. In fact, we taught the game to new players at Gen Con who did not want to use the expansion and while we still enjoyed ourselves, it really brought home just how much more versatile play styles the expansion allows.

Adding that third dimension to the game also adds another dimension to gameplay that is also theme-appropriate: you can still spread out if you want to, you can have several low-level casinos, or you can bet it all on building one very tall, high-level casino. Taking that sort of risk with high reward very much fits the theme of Vegas, which the stand-alone game already did well.

As mentioned earlier, the expansion also adds the possibility of two more players. While great at four players, the expansion really shines at five to six players because space is even more of a valuable commodity. The extra players also add for more possible casinos for folks to gamble in and gives that added incentive to not be too cautious because there are more competitors.

As a risk taker and someone who loves when mechanics and theme are so well married, I can’t recommend Lords of Vegas: UP! enough. It’s a tremendous addition to an already fun game. It does exactly what an expansion should do: it adds a minor level of complexity while adding a maximum level of new strategic possibility. Many other expansions could learn a thing or two from it.