You are reading
Written Review – The One Ring RPG 1st Edition

The One Ring RPG is a beautiful fantasy storytelling game set in J.R.R. Tolkien’s Middle Earth. The game was written by Francesco Nepitello and is published by Cubicle 7. The first edition of this game, published in 2011, is no longer available, but the link to purchase the game at the bottom will be to the newer version which is all contained in one book and contains some extra updated information. That aside, we are discussing the first edition today and how the basic gameplay works and what sets it apart in the RPG world.

The first edition of The One Ring RPG comes in a sturdy book sleeve and contains the following:

The artwork for these books are stunning and very fitting for Middle Earth. This game features artwork by John Howe, Jon Hodgson, Tomasz Jedruszek, and Paul Bourne.

What Is It All About?

The One Ring fantasy RPG takes place in Middle Earth between the events of The Hobbit and The Lord of the Rings. Players have the opportunity to encounter many characters from both stories, and the adventures can even occur during the later events in The Hobbit, to the events leading up to/during The Lord of the Rings trilogy. The Edge of the Wild, the first of the adventure sets, is meant to take place in 2946 of the Third Age, 5 years after the Battle of Five Armies occurs on the Lonely Mountain and Smaug is defeated. The storyteller and “game master” in The One Ring is called the Loremaster.

Players choose one of the Free Peoples of the North to play in The One Ring (TOR from now on). After Smaug’s death, Bard the Bowman takes his place as King of Dale, and the people that follow him and his rule are called Bardings. The Skin-changer, Beorn, steps up as a leader after Thorin Oakenshield’s death, and those that are under him are called Beornings. The Dwarves of the Lonely Mountain are still around and are now ruled by Dain, who has enabled Erebor to thrive as King Under the Mountain. The Elves of Mirkwood (or wood-elves) are still ruled by Thranduil in their awe-inducing underground elven halls. Hobbits of the Shire are also a playable people, as many young hobbits decide to follow the longing for adventure after Bilbo returns from his own adventure. Lastly, the Woodmen of Wilderland are a strong people that have lived in the forests and sustained with large families throughout the wars.

Players will create a character which features some unique spaces such as a Shadow Weakness, Valour, Hope, and Shadow points. A brief run down on these items that we feel are very unique to TOR…each character has a flaw, a Shadow Weakness that may play a part in how they react/score with various people they encounter or situations they find themselves in. Valour points are awarded for great deeds that heroes accomplish throughout the game. Hope points are essential a spiritual vigor score in which heroes can draw upon Hope to do things that their character could not push themselves to do otherwise. Countering Hope, Shadow points represent corruption and weakness in a hero’s soul. 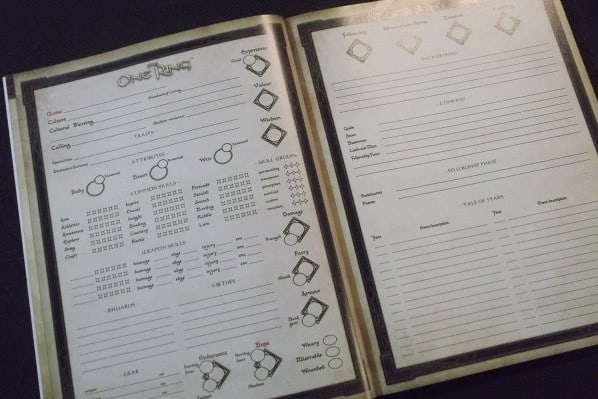 The other dice featured in this game is a set of d6’s. 1-3 are hollow printed numbers, and 4-6 are solid black. How these distinct features affect roles are determined by adventure/character conditions at the time and what they’re being rolled for. The “6” face of these dice have a tengwar symbol which indicate a magnificent success – it is advised that Loremasters and players take note of these as they are likely to award things such as Valour points and a chance to change history with such events. 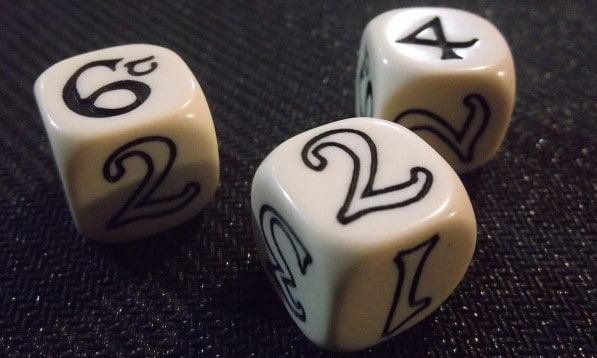 In combat, adventuring, and conversation, the success dice have degrees of success. If a player rolls the dice and no tengwar icons are rolled (on the face of the 6 side), the action was a narrow success. At least one tengwar icon indicates a great success, and 2 or more tengwar icons rolled make the feat an extraordinary success that is likely to go down in history, as mentioned above.

Throughout the adventure, as the characters travel, they will take on roles. All characters are presumed to have basic knowledge of the various areas of Middle Earth and should be given a map of their own for personal notes and to indicate travel points. On the trip, players will make Lore roles to determine the difficulty of their trip. The roles that players can take are as follows:

There is definitely still combat in this RPG, but it is heavily story driven and it is encouraged to have players aware that they need to ask questions and really get into their role, thinking about their race and reason for adventuring. In regards to combat, players place themselves into various stances for each round of combat. Any characters sharing a stance determine who goes first by Wits scores. These stances are as follows :

In combat, the attacking character rolls against the target’s TN (Target Number) determined by stance, plus their Parry rating, and any other defensive gear. They roll the feat die (d12) + a number of success dice, based on what skill the character is using. If they hit the target’s TN, they deal damage equal to their Damage slot on their sheet, as damage is always fixed. A great success (at least one tengwar icon was rolled) will delivery the damage + the attacking character’s body score, and an extraordinary success (2 or more tengwar icons rolled) will deliver damage + twice the attacker’s body score. This makes combat fast.

Does The One Ring RPG Stand Apart From Them All?

The One Ring RPG is a pretty unique world as the world is already established, but it has so much potential. I believe that whether a Tolkien fan finds themselves in the role of a player or the Loremaster, there is so much to discover. If you’re a die-hard fan that owns all of Tolkien’s work, illustrated dictionaries on extensive maps, creatures, and cultures of Middle Earth, and more memorabilia than they have business owning (all me, sorry not sorry), this game is gold. While there are some campaigns available in this book (and more campaigns in the following books), There is a lot of information available to the Loremaster to build their own adventures. But if the person that takes on this role already knows a lot about Middle Earth, this could be a cinch. 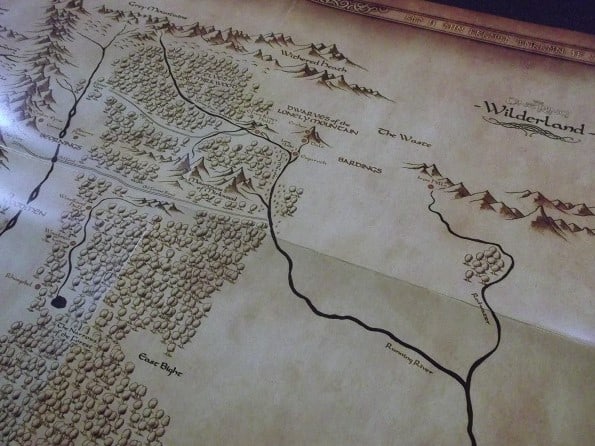 Players get what is called “Storytelling Initiative”. While the Loremaster will usually have this, sometimes the players will take this over and guide certain parts of the adventure, or a NPC interaction. This is something I love about this system, because sometimes, games that are heavily role-play based can get boring for the players if they feel that they have no say in the way events are being told. For example, if a player has a successful interaction with a NPC, or takes out an enemy, or does anything else of note, the Loremaster may give the player storytelling initiative to describe exactly how the event takes place.

In addition to the Shadow ravaging the lands of Middle Earth, shadow can also creep into the souls of the players which creates a frequent crossroads point for players. Doing certain things, or reacting in certain ways, can add shadow points to their character which will negate their hope, and sometimes jeopardize a player’s future chance at success. It is a fine balance between pushing your characters limits and managing the amount of shadow on your adventurer!

The books are full of useful tables, like this table of Misdeeds that will add Shadow to a character.

This game comes with some pre-generated characters in the back of the book that can be used for a sample campaign, or farther if the players so choose. There is one character per race, each with their own back story and stats. They are well balanced and enable players to really get a feel for how the game plays out. A player of mine that played a hobbit was worried that his size would put him at a disadvantage during game play. However, his sharpness (and fantastic rolls with his bow) made him a crucial member of the group and enabled the group to escape a really bad situation.

The sample adventure is called The Marsh-Bell. It takes place in early spring of 2946 near Dale. Two Dwarves left Lonely Mountain on an errand, but seem to have gone missing. The Kingdom under the Mountain seeks help, and word has traveled to Dale, where the players begin. Gloin himself is offering a reward for their safe return, and other motivational points as to why certain characters may want to embark on this journey are listed in the beginning of this adventure to aid the Loremaster. It is broken up into 3 parts. By the end of the first part, players should have a good grasp of the game’s mood, encounter a famous character in Middle Earth, and have gained some Advancement points. The second part introduces journeys and travel into the Long Marshes. The third part puts the company in the midst of the Marsh-dwellers who have crafty ways of taking the heroes down if their eyes and ears are not open.

As a new Loremaster, I found the guide easy to follow and easy to tell where there should be narrative and where the players should be encouraged to act on their own volition. My biggest fear with running RPG’s is the feeling that I don’t have enough information (or may not have all the right reference materials — I did not feel that way with TOR. All of the information I needed was right there in the book. Someone wanting to create their own campaigns will definitely benefit from being a fan of Tolkien literature to help put adventures together, but most of the information you’d need to build one is right in the Loremaster’s book. Since the release of this set, more adventure sets have come out. Stay tuned…reviews on those are coming, too! 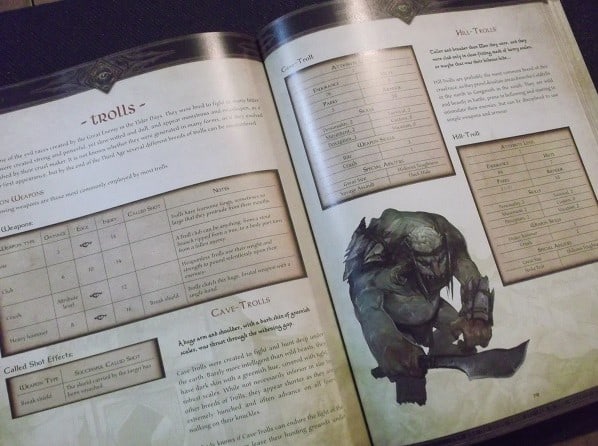 Information on enemies, including customized options.

Now, the copy I have reviewed today is an edition that is no longer being sold. But never fear : Cubicle 7 listened to concerns of fans of the game and actually published a brand new core book that has contents of both books from this set, including the maps.