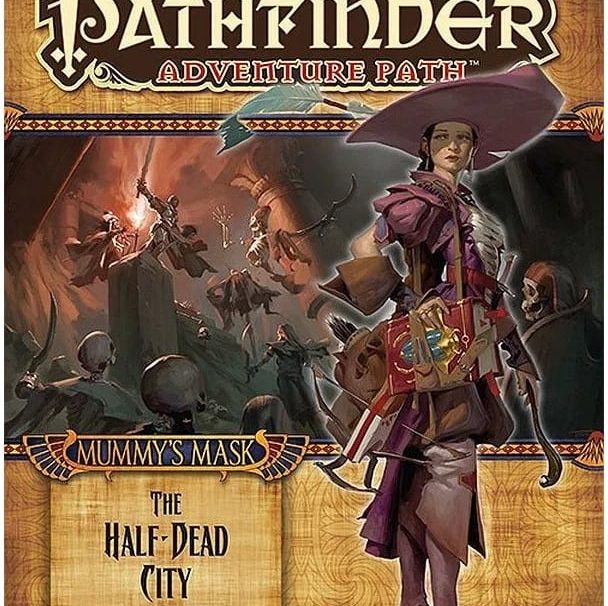 Paizo had the community in a buzz when they released the Mummy’s Mask Adventure Path for Pathfinder back in 2014. This AP centers around the land of Osirion, which is closely related to our very own Egypt in the physical world. In this path players were promised to encounter mummies, traverse the hot sands, and score long-forgotten pieces of historic treasure. The AP is a set of 6 books and starts off with book 1, The Half-Dead City. The overarching plot follows an ancient artifact that’s been stolen from a tomb in the necropolis sitting in the city of Wati. Players find themselves mixed up in some madness surrounding the stolen artifact and experience an adventure like none other.

The Half-Dead City spans 92 pages in all, complete with maps, plot details, and a small bestiary for special creatures found in this Adventure Path. Penned by Jim Groves, this AP brings to life all of the scenes of an ancient sand-ridden land: pharaohs, scarabs, ancient treasure, tombs, pyramids, and much more.

The Half-Dead City, like all other Pathfinder Adventure Paths, comes in both a paperback book and .PDF version. While I have some Pathfinder books in .PDF format for space-saving reasons, I do prefer the print versions for APs. Luckily this AP came in its print version, so we’ll have plenty to look at with the book. First off, the first book in this AP is 92 pages long and wrapped in a golden paperback cover. Its artwork is very reminiscent of something from ancient Egyptian times, often reminiscent of middle-eastern styles. Lots of bright colors and outlines of gold adorn the book and its artwork, further tying in the theme.

The book’s overall quality is nice, with the cover being quite sturdy for it being a paperback. The pages are thick enough that they won’t tear when you turn the pages, and the print quality is just great. There is an issue, however, with the book’s binding. I, along with others I’ve found across Paizo’s forums, have had an issue with several pages coming loose from the book’s binding. To be specific, pages 3-14 have completely fallen out of the book’s binding. Thankfully I’m through this first book in the AP and I can use some super glue to get the pages nice and stuck back in the book, but this is quite an annoying issue with the book itself.

Here you can see how the pages have fallen out of the book, but they can be reset by putting some super glue on the binding.

The Half-Dead City begins with the players taking part in a lottery run by the church of Pharasma in the city of Wati. The church is handing out specific locations in the city’s necropolis for exploration in the hopes that important information may be found about the city’s early beginnings before a massive plague wiped out most of it. The players join many other groups of adventurers in the hopes of exploration, glory, and finding marvelous treasure. Each band of adventurers will be handed out three different locations in the necropolis to investigate. Once a location is completed the adventurers return to the Grand Mausoleum of Pharasma in the city to get their next location.

The first location the players are given is the Tomb of Akhantepi. This is an entry-level dungeon crawl that helps get players into their character’s mind and learn a bit more about both Wati and Osirion. Things heat up when the players head off to get their second location, the House of Pentheru. Once the players have turned in their findings at the Grand Mausoleum from the Tomb of Akhantepi they’re turned to the Tooth & Hookah inn to catch some rest. Here is where they get their first glimpse of the rival competition, a group by the name of The Scorched Hand. These adventurers are devout followers of the god of magic, Nethys, and they feel that they should be given access to an ancient temple known as the Sanctum of the Erudite Eye – said to be located within the necropolis. The group’s leader is a strong-willed woman named Velriana Hypaxes. During this point of the AP she is found in the Tooth & Hookah raving about not being given the Sanctum of the Erudite Eye as her group’s first – and really only cared about – location to explore. Of course the PCs know next to nothing of anything called “the Erudite Eye” and only answer a handful of her questions. This foreshadows the group’s involvement down the line.

Wati – the reinvigorated city along the River Sphinx.

The second location the PCs are given is the House of Pentheru. This large mansion is yet another dungeon crawl, though there are many avenues of exploration here. With two floors above ground, a crypt below ground, and a full yard all the way around the premises, this is a nice, lengthy exploration. The house is found to be haunted by a Doru Div, a devilish being of great and terrible power. Through their investigation the PCs find out that the Div was creating ghoulish creatures known as Varguilles and sending them out to terrorize the city during the night. This also serves as yet another opportunity for the PCs to learn more about Osirion’s history, the pharaohs that ruled it, and geographical ties to Wati. There are some interesting things happening up at this house, and they make for some intriguing encounters.

The final location handed to the PCs is a large abandoned temple that priests of the Grand Mausoleum feel was dedicated to Nethys. As the PCs make their way to the temple they’re ambushed by hired thugs in some ruins inside the necropolis. It turns out that The Scorched Hand had taken matters into their own hands, and, after feeling disrespected by the Grand Mausoleum for not giving them the Sanctum of the Erudite Eye as their exploration location, sought the temple out for themselves to explore before anyone else could. Velriana took it upon herself to hire some street thugs to attack any adventurers getting close to the temple. The thugs give up no information on The Scorched Hand, but the PCs should be getting the pieces together at this point.

The artwork is fantastic, and this is totally an encounter!

Once the PCs reach the temple there are telltale signs of others present in the location. Though extremely ancient, the temple is quite well taken care of, which sets it apart from many other buildings in the necropolis. This is due to the temple being inhabited by a being known as an ankhat – an elemental being of great power that lives within the walls of the building. The ankhat is trapped within the building and kept in place by a keystone, which serves as a cornerstone of the building that it inhabits. As the players explore the temple they begin to piece together that they’re in the Sanctum of the Erudite Eye and turn up lots of information on both Wati and an overarching story plot – an artifact of great importance being taken from the temple. Eventually the PCs meet up with The Scorched Hand and a battle ensues, leaving The Scorching Hand on the losing end of the fight. Once the PCs clear out the temple, they turn their findings in to the Grand Mausoleum, which turns up some surprising information. Next an auction is held for many of the treasures found on their adventures within the necropolis, which kicks off the next book in the Adventure Path.

As with many other Pathfinder Adventure Paths, The Half-Dead City is built and organized very well. Jim Groves did a great job in offering players with a lot of knowledge for the Osirion region, along with its many rulers and geographical locations. It’s somewhat of a slow buildup, though, without many options for roleplay. Essentially The Half-Dead City is a group of three dungeon crawls that has potential to bore players without giving them much incentive to learn about the backstory of the AP.

Still, what I like about the APs is that most of them are looked at like a large set of framework. Of course you have your maps, enemy encounters, and some roleplay elements, but what makes these adventures great is the flexibility of the GM and the unpredictability of the players. Personally I added in all sorts of tidbits and side events that really helped bring this AP to life. There was a particularly interesting Gnome merchant in Wati known as “The Writer”. He was somewhat of a historian, and, because of my players’ great rolls and willingness to engage in roleplay, became a large part of the story itself. The Writer helped offer up some information, and even tipped the PCs off about something “haunting” the House of Pentheru. It was a great way to get players talking and make use of the AP’s gifts of historic knowledge and it goes to show that you really can turn up the heat of your adventures with a little GM spice.

Foreshadowing plays a huge role in this AP, with players slowly learning the bigger plot at hand only by bits and pieces here and there. I feel a dungeon crawl adventure is a great way for players to learn their characters and get used to the game, though roleplay is an important aspect for me in this game. The Scorched Hand’s involvement comes in somewhat like a child whining because they didn’t get what they wanted. There’s no real motivation for what they do save for the fact that they want to investigate the Sanctum of the Erudite Eye to get treasures before “nonbelievers” can get their hands on them. I would have liked to see some bigger involvement from this group, especially since they’re such cool characters when you get into it.

Still, the AP was very fun – and quite easy – to run. My players really enjoyed themselves and are eager to get into the next book. I’m looking forward to expanding the adventure, and I hope to see more opportunities to roleplay and use what the PCs have learned in this first book. The setting is great, and a lot can be done with the theme (mummies, pyramids, ancient tombs, hieroglyphs, and the like). Overall The Half-Dead City is a good jumping off point for adventures in Osirion.