Today, I have for you an informal review of something we were given at Gen Con this year – two mini teaser games by a company called Thames & Kosmos. Thames & Kosmos is a company that makes games and toys directed towards kids, and aims to bring fun to science and education. They qualify as STEM (Science, Technology, Engineering, and Math) for parents that are looking for games and products in that category. As a parent that does homeschooling, this was very enticing.

While walking out of the exhibit hall one day, a woman with a warm smile handed me two CD-sized items. These were mini-teaser games to pique attendee’s interests. While I didn’t have much time to play them at the convention itself, I did pull them out and play a few times with my family in the months following. I wanted to share my experience with you in regards to these two mini games, and what age ranges could really benefit from these.

In Dohdles, players mold things out of clay while other players guess what the object is. For the purpose of the teaser game, photos of pre-molded figures were included. It is meant for 3-6 players, ages 8+. You want to guess what the object is in the fewest number of rounds, and the person who is first to solve the most puzzles is the winner.

Use some scraps of paper and pencils, plus 7 mini bowls or cups, numbered 1-7. Each round, a hint will be read. Players then write down a guess as to what the image of the “dohdle” is. This continues until all 6 hints have been read, and each player makes 1 guess per round. Use the die cut key to reveal the answer, and whoever was first to solve it (by revealing guesses in the numbered cups) wins the round. This mini game comes with 4 Dohdle cards. 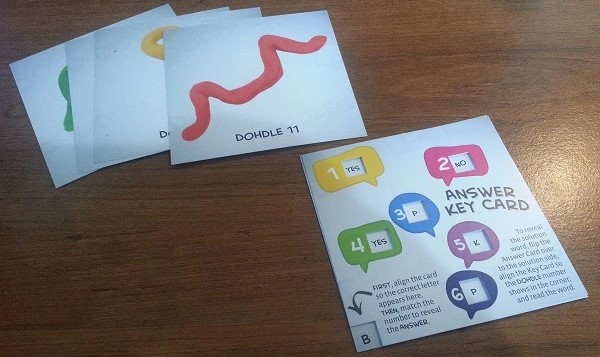 In the full version, players make their own Dohdles and write down solution words. Players take turn asking questions and gaining hints until someone guesses. There is a game board that indicates each player’s current position, correct guesses move the player forward, while incorrect guesses move them backwards.

I think the way the mini teaser game was formatted gave a good sample of how to play this game. I could see this game being suitable for younger children as well if the shapes were kept simple and the child was adept with clay. The only downside I can see to this game is the need to frequently buy modeling clay, but clay isn’t horribly expensive so this may not be a factor for some folks. I didn’t get to play the full version of this but love the artistic, creative, and hands-on benefits to this game as people have to “model” their brains after a lump of clay in front of them!

Ubongo is a puzzle game for 1-2 players, ages 8+. The teaser came with a total of 6 puzzle faces, and a set of puzzle pieces. The idea is to look at the top row and pull out the pieces shown, and use only those to fill in the puzzle. Then move on to the next set, and so on. In a 2 player game, players race to complete the puzzle first, and shout “Ubongo!”.

I like puzzles, so I enjoy the idea of this game. I’d be interested in getting a hold of the full set for a brain-crunch game session. In a small 2 player game it was fun to step up to the challenge of making a complete puzzle with only 3 pieces and do so before the other player. I played it a few times on my own, too. While it obviously isn’t competitive this way, I lean towards puzzle games of most types and found it peaceful to sit and manage the combinations myself.

Based off of the teaser games, I think I’d personally pick up Ubongo over Dohdles, but would be happy to give both full versions a try! It was nice getting a peek into both games, and I think that handing out portable teaser games of their full games is a great way to draw people in. If you’ve played the full version of either of these games, please let us know in the comments!