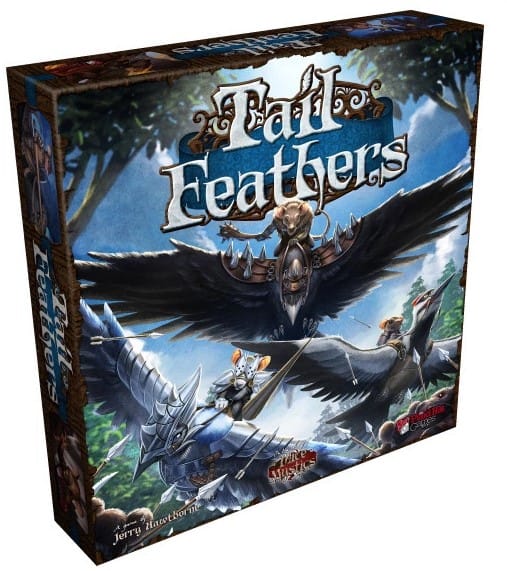 For the longest time I felt great pride in saying that my favorite board game ever played was Mice & Mystics. It’s such an amazing game with wonderful miniatures, great storytelling, and a sense of depth that I felt most board games at the time seriously lacked. Since Mice & Mystics’ initial release we’ve seen a few expansions, but nothing tops what Plaid Hat is doing with Tail Feathers – a brand new take on the Mice & Mystics world.

In Tail Feathers our favored heroes – Colin, Maginos, and more – seek aid from above while battling villainous rats and dangerous hunting birds. This turns into glorious battles waged in the sky, with our heroes literally diving into combat on the backs of starlings and blue jays. This new miniature-based combat game brings to life mechanics that have never been seen before – such as floating across the battlefield on a leaf (make your “leaf on the wind” reference here) to reach other trees!

The game is set to release during Essen this year, which happens to be this coming weekend. Not only does it look amazing enough, but Plaid Hat and F2Z Entertainment put together a brand new trailer for the game to induce much drool and tears from gamers’ wallets. Do yourself a favor and check out the trailer below, and for anyone that’s going to Essen, GRAB ME A COPY!