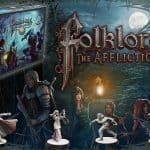 You are reading
Greenbrier Games to Unleash Folklore: The Affliction on Kickstarter Tomorrow 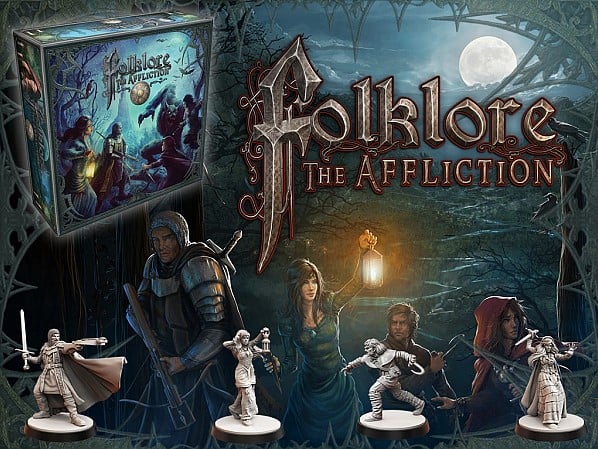 Greenbrier Games has been extremely busy this past year. When we stopped by to see them at Gen Con this year their booth was alive with energy for the new games they had at the con – both Yashima and Fairytale Games: The Battle Royale. Of course their popular hits were getting attention as well, such as Zpocalypse and Ninja Dice. I was fortunate enough to have some of my painted models on display at their booth this year, promoting Yashima and Heavy Steam.

The company isn’t slowing down, and they’ve shared some amazing news with us. The Kickstarter for their newest title, Folklore: The Affliction, will kick off tomorrow, October 6th. Folklore: The Affliction is a dark fantasy role playing board game for 1-5 players that doesn’t call for a game master. Your characters will be challenged by their environment and engage in dangerous miniatures-based combat as well as non-miniatures based skirmishes as they adventure on the world map and as they dungeon-crawl through dark places. This allows all players to enjoy a game together rather than focus on a player versus game master mechanic.

Another thing that separates Folklore apart from other games of the dungeon-crawl genre is the overarching story that ties the entire game together. Player-made decisions have a huge effect on the game and help build and fork the story that details each adventure. This offers a lot of replayability, customization, and depth to the game at large. This game takes you back to the ancient tales of old, to a time where your ancestors were terrified of the night. You’ll be taken to a time where manors, graveyards, forests, and castles lie infested with ancient evils that mankind has all but forgotten.

Speaking in gameplay terms, the world of Folklore is being terrorized by different Afflictions. Each Affliction is known by name and is both a paragon of power and a threat to the countryside. Each adventure focuses around the blight caused by types of Afflictions whether they be Mortal, Shapeshifter, Undead, Spirit, Occultist, Demonic or Nature. Many creatures plague the people and the land, and those whose strengths are unique among them are called Afflictions. The characters are powerful in their own right and command strength against those that would act in the dark. Each character has their own skills and sets of unique abilities to acquire and master in their rise towards dominance in the war against evil. Each also has a distinctive depth and feel with nearly 100 abilities and endless replayability.

When the Kickstarter goes live you can grab a full copy of the game, including all stretch goals, for just $95. What’s more is that there are a ton of add-ons that enhance the game even further beyond what it offers for itself. I’m super excited because Dog Might Games has partnered with Greenbrier Games on this project. That means some awesome gaming accessories that you won’t find anywhere else! Specifically with Folklore, you can pick up a few add-ons through this Kickstarter campaign, such as the Deluxe Game Box, custom Dice Tray, and Single Player Box. The game looks amazing, the miniatures are awesome, and the game itself looks to be tons of fun. Make sure you get your wallet ready for Folklore: The Affliction when it hits Kickstarter tomorrow! Take a look at the image below to see what you get in a single pledge, but be warned – it’ll make you drool!