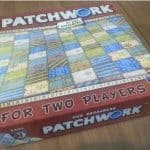 You are reading
Written Review – Patchwork 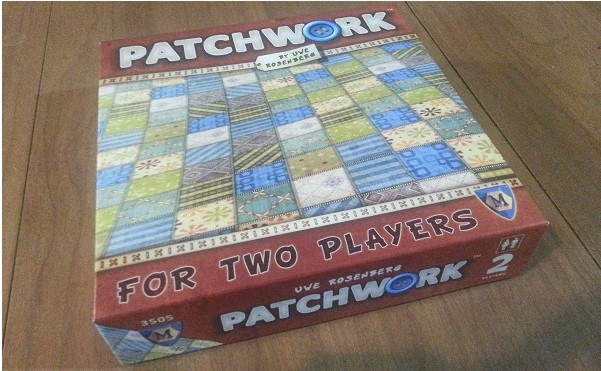 vGrowing up I remember one of my most favorite things in the world was this blue quilt that my grandmother made for me. I took it all around the house, slept with it each night, and used it to create the strongest blanket forts anyone has ever seen. Of course I knew it was an awesome gift, but at the time I didn’t know how much work and pride went into making something like that. As I grew older I picked up on the quilt’s craftsmanship and to this day it’s still something I’m eternally grateful for. In Patchwork by Mayfair Games it’s up to you to put together the best quilt you can and use your spacial skills out-quilt your opponent. With all sorts of cloth patches and pieces of leather lying around it’s time to make a masterpiece.

Getting Your Quilting On

In Patchwork two players square off to see who can make the best use of their time and resources by building the most efficient quilt. Players take turns choosing patches to place on their quilt boards, each of which costs a certain amount of time and buttons (the in-game currency). As you place patches on your board you’ll advance your time marker down the track of the time board closer to the end of the path. Once both players reach the end of the path on the time board the game ends and the player with the highest amount of buttons wins.

Setting up a game of Patchwork is easy. Each player will take a quilt board, a time token, and 5 buttons. The rest of the buttons are piled up and form the reserves. The time board is placed in the middle of the table with each player’s time tokens on the starting space of the board. All of the regular patch tiles are then placed in a large circle/oval around the time board, creating a large play space. Then players will need to locate the smallest patch in the circle (the 1×2 patch) and place the neutral token between it and the next patch in clockwise order in the circle. The special patches are placed on their respective spots on the time board, and the special tile (a tile that awards the first player 7 buttons for making a 7×7 grid of patches on their quilt) is put off to the side. After that the game is ready to begin! 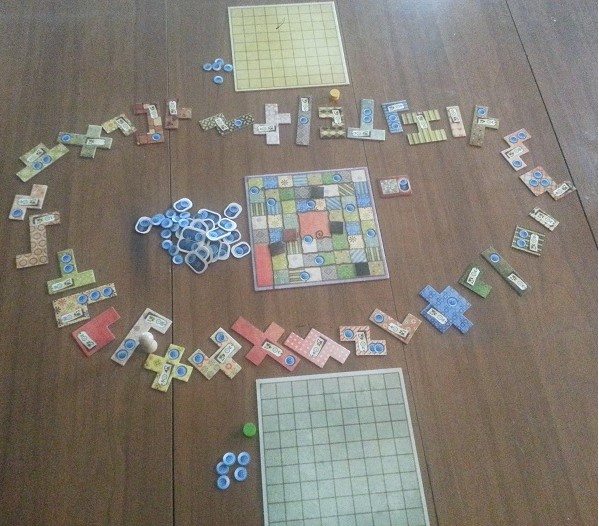 Now that everything’s laid out, you’re ready to get quilting!

As mentioned above, Patchwork is played through a series of turns, yet it doesn’t follow a simple set turn order. Time is a big factor in Patchwork and it’s also a sort of currency when paying for patches, which we will get to in a bit. On your turn you can do one of two things: either advance your time token and earn buttons, or take and place a patch on your quilt board, paying its cost. Let’s take a look at both of these actions in more detail:

You see, each patch costs a certain amount of buttons (sometimes zero) and time (never less than one). When a patch costs time you will advance your time token on the time board forward the number of spaces listed on the patch. This simulates the amount of time it takes to sew the patch onto your quilt. Bigger patches will obviously cost more time. Something else to look out for on the patches as well are actual button symbols. As you advance your time token on the time board you’ll pass spaces with buttons on them. When this happens you earn one button for each button shown on the patches of your quilt. Bigger patches will have higher costs, but they also usually have more button symbols on them. Advancing on the time board will also net you special patches that will fill smaller spaces on your quilt board. When you gain these patches you place them immediately for free.

You have two quilting boards and a time board. All of them are double-sided!

Once a player has finished their turn, you turn your attention to the time board. The player who is the furthest behind then takes the next turn. This can result in a player taking multiple turns before their opponent does. It all has to do with that time mechanic we’ve been talking about. If you grab a bigger patch that takes more time, your opponent can grab smaller patches multiple times before you go again. This is where a lot of strategy comes into play because time is a precious commodity!

As you go around picking patches the circle will get smaller until eventually only a select few are left. Placing patches on your quilt takes time, and sooner or later you’ll move your token to the end of the time board. When both tokens reach that end space the game comes to an end and your quilt is finished, completed or not. Then you’ll count up the total amount of buttons you have. You’ll subtract from this score 2 points for each space on your quilt that’s left bare. Manage your time and buttons wisely and you’ll end up with the most buttons at the end of the game, making you the master seamstress/seamster and the winner of the game!

The small brown special patches are earned by passing their space on the time board, and as you pass buttons you earn income from all the buttons on your quilt.

Patchwork may be one of the best two-player games I’ve ever had the enjoyment of playing. It’s quick to setup and play, has a fun strategy to it, and offers plenty of replayability. I think Patchwork is unique in the fact that it’s a lighthearted game that can be heavy depending on how you play it. It hits right at a nice mid-point for me where I can see two sides of the coin. If you’re looking for some light fun game with low conflict, Patchwork is a perfect choice. However, if you’re wanting some hard competition Patchwork can offer that for you if you pay attention to what’s available versus what your opponent needs on their board.

So many colorful patches, and unique shapes!

Another thing I like about Patchwork is that all information is available to each player at once. There’s no outside factors that come in to potentially screw either one of you. On your turn you’re limited to what you can do: choose one of the three patches available or try and catch up to your opponent on the time board and earn some buttons. There’s no secret cards, no random dice rolling, and definitely no luck of the draw mechanics slowing you down. You can see everything in front of you and plan your next turns out to work as efficiently as possible. You can also formulate backup plans by seeing what your potential next patch choices will be depending on what your opponent does on their turn.

It’s easy to forget sometimes when playing Patchwork that, while there’s no real timer or countdown clock, you’re locked in two different races with your opponent. There’s the overall race that’s dictated by your actions and tracked on the time board which will spell out the endgame, and there’s also the race to get a 7×7 quilt constructed before your opponent to gain those extra buttons at the end of the game. This adds a ton of depth to the game as you will really need to strategize in order to stay on top in the quilting competition.

A completed 7×7 quilt earns you the special tile if you’re the first to make it.

Perhaps what I like the best about Patchwork is that it was solely designed to be a two-player game. Most of the time two-player games are shafted in the tabletop world, but Uwe Rosenberg did an amazing job to make this suited for pairs and couples alike. The game is really easy to teach (the rulebook is laid out WONDERFULLY), playable many times over within a short amount of time, addictive, and easily demonstrated for others. No matter a player’s skill level Patchwork can offer a great time. It’s intimate, and can fit nearly any pairing thrown at it.

As a husband and gamer who primarly games with one other person, Patchwork is an excellent title to have on the shelf. It stands out against other games with its attention to detail, amount of depth crammed into a small box, and the fact that it’s a perfect fit for couples. Uwe Rosenberg has finally shed some light on two-player gaming that I think every pair should check out.