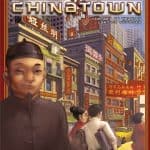 You are reading
Written Review – Chinatown 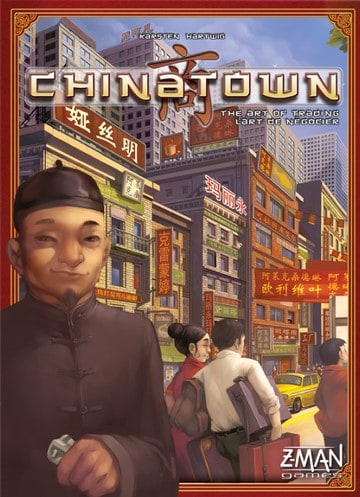 New York in the 1960’s. You are an entrepreneur looking to make a new life in America, with only your life savings, wits, and negotiation capabilities. Published by Z-MAN Games in 2008 and 2014, Chinatown gives players a new look at life in New York and the arduous journey to grow their businesses as they compete for attention in a time of booming commerce. 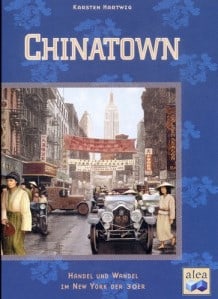 Originally published in 1999 by Alea in a Big Box Game Series, Chinatown has maintained its popularity with multiple reprintings, Z-MAN first doing so in 2008 and then again in 2014. We’ll show you why this game of tile laying and trading has earned the attention it has!

Chinatown features the art of Mathieu Leyssenne and comes in a box similar to the size of Pandemic. Included in this beautiful red box is the following;

Players can design their own businesses with the blank tiles to add their own flavor to the game! The game board is laid out with 6 beautiful districts, a clever zodiac-style timer system, and fun details in the streets. 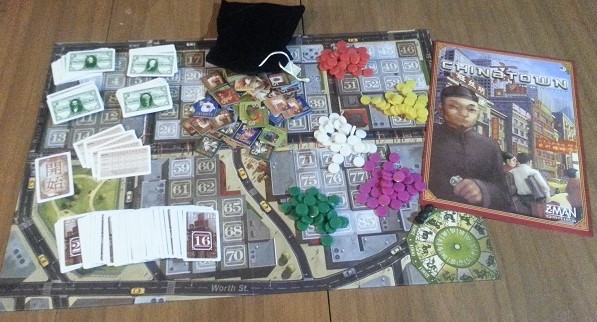 Chinatown is a fairly straightforward game, but with incredible depth. In Chinatown, players have 6 rounds to build as many businesses as possible and amass as much income as they can. The winner of the game is the player with the most money at the end of the 6th round.

To set up the game, lay out the game board, and have each player choose a color and take the appropriate Ownership markers. Give each player gets a Player Aid card, which will help players with tile draw throughout the rounds and figuring out how much businesses earn at the end of each round. Each player takes $50,000, and the rest of the money is put within reach of all players. Shuffle the Building cards in a pile on the table. All Shop tiles go into the linen bag, shake it up, and set it aside. Then place the Year marker on 1965 in the calendar in the corner.

Each round has 6 phases: 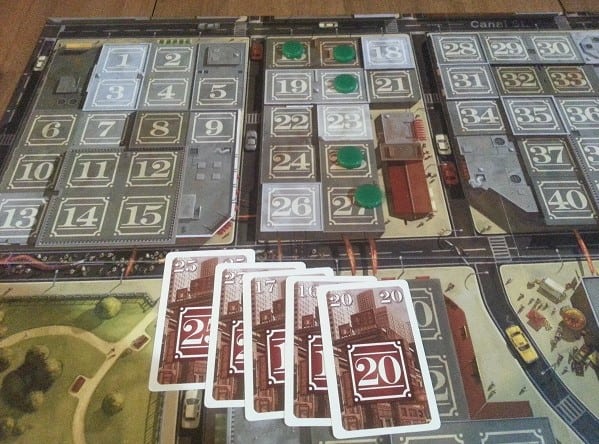 Green player gets this sweet draw on their first turn and places their Ownership markers on these spaces, then places these Location cards in a permanent discard pile. 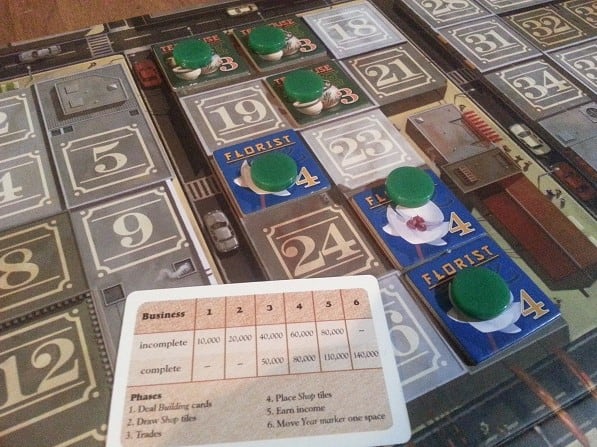 Scoring for this district is as follows : The Tea House Business has 3 tiles adjacent and are a complete business and are worth $50k. The two florist shops that are adjacent will earn $20k for being incomplete. The singular Florist shop will only generate $10k because it is not adjacent to the other Florist shops.

Does Chinatown Live Up To The Hype?

I’ve played quite a few games where negotiation is a key mechanic, but the “anything goes” detail in the rules really is what made this game interesting.  Like really, anything? It depends on how desperate you or your opponent are to seal a deal. I’ve seen absurd requests be met by even more absurd counter offers. I’ve seen 2 locations, $200,000, and a shop tile be exchanged for one location and one tile. This game is all about weighing out the pros and cons of the trade.

I wanted to touch quickly on the beautiful simplicity of the game. The game board and components aren’t cluttered. They are clean and clear, and it is one of those “easy to learn, hard to master” games. The board is again, beautiful but straightforward. There are a few fun details such as the dragon parade and some other fun street scenes in between the districts, but these were things I only noticed during set-up and clean-up. They aren’t distracting at all. 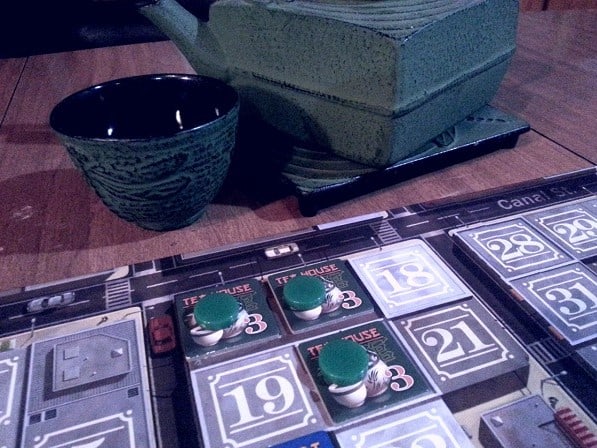 The game starts off pretty standard – not a lot of trading going on because we don’t know where the following turns will lead. However, the 5th and 6th rounds especially see some pretty brutal negotiation. If you’ve played Settlers of Catan and enjoy the trading aspect of it, you will absolutely love Chinatown. Trading early on tends to be somewhat…peaceful and logical. Something about breaching that 4th round, though, will make your level-headed neighbor entrepreneurs turn savage. It is a beautiful thing.

Sure, a good strategy in this game is doing quick math when it comes to trades : if they’re asking a bunch of money, will you make it back and then some at the end of the round, or is it going to put you in the hole? What locations should you hold on to? Maybe you have some cards that mean nothing to you, but one is a prime location that an opponent will likely want. That’s my personal strategy : take care of me first, then claim locations and shops that my opponents will want next.

There isn’t a lot of down-time, as the players act almost simultaneously. Which is great, because there might be the occasional turn where no one will want something from you…but it is very rare. It happened only once for one turn in all of my plays before writing this up. And it didn’t even happen to me. Someone will almost always be interested in something you have, or vice versa. I find that time flies when we play Chinatown because you get really immersed in your own plans and what can you sacrifice while still gaining an edge over what the trade may enable your opponent to gain. Lots to think about!

Chinatown retails for $39.99 and packs a lot of fun and replayability inside the box. This cutthroat game of trade and negotiation may look peaceful by the smug look on the guy’s face on the cover, but you’ve no idea how much fun this game really is until you get it to the table. We don’t give a lot of games 10/10, but Chinatown has earned it. Get this game in your collection!