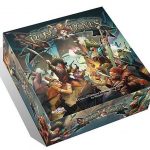 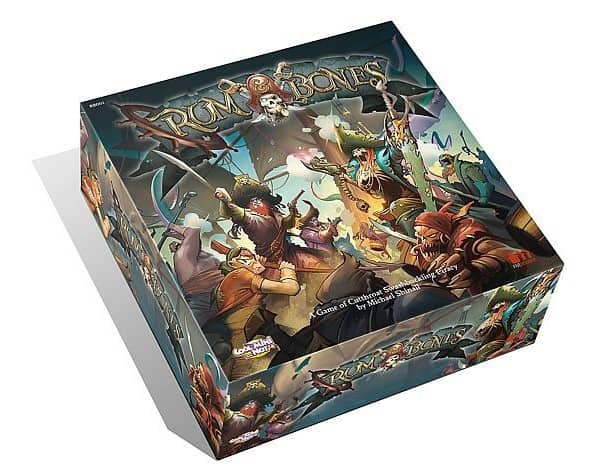 After seeing the swath of games from CoolMiniorNot that look totally awesome and not owning one, I decided it was time to swim out and climb aboard the CMoN ship and start experiencing them for myself. Of course, I’ve played Zombicide and we’ve got a review for it up on the site, but I haven’t owned my own CMoN game – until now. The first game that’s caught my eye with certainty is Rum & Bones, a pirate-themed board game that recently funded via Kickstarter successfully.

Rum & Bones is a game that’s not like any other I’ve played. Briefly described it’s a MOBA-style game put into a tabletop format. For those who don’t know, MOBA stands for Multiplayer Online Battle Arena, and its a genre of video game that’s most popular on PC. Games like League of Legends, DotA, and Heroes of the Storm are MOBA titles and Rum & Bones follows suit, though it’s the first one available for the tabletop gaming world. In a MOBA game you have teams of heroes duking it out over a battlefield while little minions run a muck from one end to the other in hopes of destroying the opposing team’s base. The minions act solely on their own, and they basically move in a straight line from their spawn points and attack anything on their way to the enemy base. Each of the heroes (also known as champions) has a unique set of abilities and is much more powerful than any of the minions. Players control these heroes, usually on a 1:1 basis in the PC world, and use them to fight amongst each other to achieve victory.

Rum & Bones takes this style of game and brings it to the tabletop in a unique – and so far successful – way. The game sees two factions fighting one another across their interlocked ships. Deckhands spawn on either ship and run straight across to the opposing ship to try and destroy enemy objectives, which are basically parts of the ship itself. Each faction employs 5 different heroes that players control during the game. Each hero has a unique set of abilities and play style, mimicking champions from the MOBA genre. Instead of one player controlling one hero, each player controls the entire team. Your deckhands spawn on your ship and follow their own rules for activating, moving mindlessly much like the minions do.

On your ship are 5 different objectives, each with its own amount of hit points and victory points, and your opponent has the same on their ship. The goal is to be the first player to amass 6 victory points by destroying objectives on the opposing ship. These objectives are: the Deck Gun, Rigging, Mainmast, Armory, and Steering Wheel. Your heroes and minions can attack these objectives, with successful hits causing damage. (The game uses a dice-rolling mechanic for attacking and dealing damage. Each hero and deckhand has a to-hit rating and a number of dice you roll for their attack. Each die showing the to-hit number or greater after rolling scores one hit.) Once an objective is reduced to zero hit points it is destroyed and removed from the game. Your opponent takes the tile and keeps it in a score pile to show their collected amount of victory points. Plus, each destroyed objective gives a buff to whoever destroyed it, making your forces ever more powerful. My Brute stares down a sea of Wellsport Brotherhood deckhands to clean up!

We took the time to get in a game and what I can certainly say is that I’ve got some mixed feelings of it early on. While I think it does a good job of porting the MOBA genre over to tabletop there are some hiccups that I hope to see worked out in future plays. One of the first things I noticed was that the hero characters, who are supposed to be powerhouses, ended up being almost as frail as the deckhands were. Countless times I’d put in a hero, activate it to the fullest, then see it die on the following turn. This put myself and my opponent in a perpetual sequence of slow turns where we just tried killing each other’s heroes and not focusing on the objectives. This may just be a hiccup related to strategy, but I hope to see the heroes doing more in the future.

Next, I noticed that, for some reason, my opponent had all of her deckhands and bosuns on the table (bosuns are a step above deckhands and pump them up in combat) whereas most of mine were still in the plastic, even though we’d both been following the spawning rules laid out in the game (you spawn two deckhands at each spawn point and two bosuns across your spawn points during each of your turns). My deckhands and bosuns were getting royally wiped out while I couldn’t kill my opponent’s fast enough. I guess I should mention that I was playing the Bone Devils and my opponent was running the Wellsport Brotherhood. I felt like I was constantly in a state of falling behind and just could not catch up quick enough. Things felt very one-sided, even with using my Tide cards to help me when I needed a hand.

The last and most bothersome thing about my first impressions of Rum & Bones isn’t a mechanic or rules issue. I noticed while playing the game I felt much like I did when playing Lords of Waterdeep, which is an amplified feeling of falling behind. You see, I have this overbearing feeling that when I get far behind enough in a game like this, where you amass victory points to win, I don’t see an upside. It got to the point where my opponent had 4 out of 6 victory points and I was still sitting at none. I kept pressing on, but I felt like it was a moot point. I dislike games that make me feel this way as it’s a very unbalanced and unsettling feeling. Seriously, it’s one of those “throw in the towel” moments.

However, all of my issues so far might be able to be chalked up to just bad strategy. Maybe I over-extended where I shouldn’t have? Maybe I chose the wrong heroes to deploy at the wrong times? Maybe my opponent just got better rolls (which is an entirely different story on how this game is HEAVILY luck-based)? Only more playtime will tell. On the flip-side of things, the game was extremely fun. I had a great time moving my deckhands and bosuns across the board. I had a lot of fun taking out enemy heroes, using the Rigging to swing across to the opposing ship, and unloading the Deck Gun to take out entire zones of enemies in one go. What’s more is that we awoke the Kraken, which appears on the board as a new objective that can earn you victory points if you defeat it. It ended up causing a lot of pain, and some heroes died because of it. However, the game is a mechanic built-in for hero revival that’s quite fair. When a hero is KOed you remove their model and place it on their card along with a coin token. The token starts with the black side up. When it comes time for your deployment phase you flip the coin. If you have a deployment phase where the coin is on its gold side up, you remove the coin and you can then redeploy that hero. It’s a balancing mechanic that actually works pretty well.

While it looks like I had a lot of negative things to say about Rum & Bones for my first impressions, there’s no way to describe how happy I was to be playing it. It’s easy to learn, plays vigorously, and best of all it’s a game about pirates! CoolMiniorNot worked out a great way to bring the MOBA genre to the tabletop, and I am looking forward to getting back into the waters to face off against any opposing crew. The Bone Devils will reign victorious yet!

Keep on the lookout for our review on Rum & Bones, for it’ll be coming as quick as the tide!