You are reading
Embody A Deadly Sin with The Others: 7 Sins, On Kickstarter 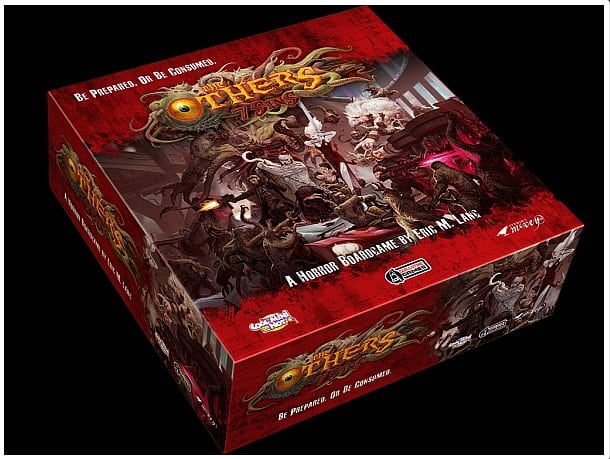 There are some who would say they told us this was coming. Haven is the last line of defense, and even it may not hold up for long. The Hell Club really did it this time – they’ve worked hard to bring forth the deadly Sins. Who would have thought the 7 Deadly Sins were actually real? You know, I’ve never been much of a church type, but I’m praying every night that F.A.I.T.H. sends these things back to the hell where they belong…

The Others: 7 Sins is a horror board game designed by Eric Lang for 2-5 players where one player embodies one of the 7 Deadly Sins, putting to work monsters, abominations, and more throughout the city of Haven, humanity’s last stand against the Sin’s corruption. Standing in the Sin’s way are the other players, each taking the role of a hero working for the paranormal group F.A.I.T.H. (Federal Authority for the Interdiction of Transdimensional Horrors). The Others have wormed their way into our everyday lives and it’s up to the heroes to put them down for good. Beware, however, for the more that the heroes engulf themselves in the fight the more corrupted they become.

Throughout the game the Sin will be looking to further its agenda by spreading corruption – an important mechanic in The Others – while the heroes seek to accomplish missions to set the Sin back from the darkness whence it came. The heroes are divided into different classes that dictate their strengths and weaknesses. As they progress in the game they can gain powerful abilities by taking more points of corruption, but this is a dangerous gamble as the more corrupted the heroes become the easier it will be for the Sin to bring them down.

The Hero Dashboard, showing where a hero gains power and abilities by taking corruption.

The Sin player will have access to all sorts of monsters and horrors at their disposal to spread throughout the city of Haven. The models look amazing, as can be expected with a CMoN game, and their attention to detail is breathtaking. Each Sin plays out a different way, adding a thematic strategy to the game. The player controlling the Sin can use their forces to outright destroy the heroes, or hinder them in their struggle to accomplish missions.

All together in the core game, The Others offers 7 different story scenarios that players can play through. Each story brings in a different set of rules, missions, and more to the game, so it’s not the same each time you run through it. There are Terror stories, which are more straightforward, focusing on action and combat; Corruption stories revolve around the Corruption spreading through the city and the heroes themselves; and Redemption stories rely on saving the city and the few innocents that remain.

All of this is put together in a great-looking miniatures game that seems like it’ll be a ton of fun. I’m a fan of horror games and this is one I’m getting quite giddy for. CoolMiniorNot posted this game as a project on Kickstarter, originally asking for $100,000 to make it a reality. We’re still 19 days away from the end of the campaign and it’s raised over 5x that amount. The campaign is breaking through stretch goals, adding models and more to the game, and constantly getting better and better. I’m totally excited for The Others: 7 Sins, and you should be too. Head on over to the Kickstarter page to check out more on the game and slap down a pledge to get your own copy when it ships out in March of next year.