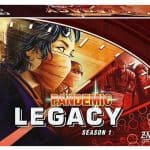 Pandemic has always been a staple game for me ever since I played my first time years ago. I’ve been a Pandemic fan for quite some time now, and I’m happy to say I’m even a part of the Z-Force Team. With Pandemic: Survival the community was opened up to competitive play, and it is still a standard of organized play that is going strong. But what about those friends and gaming groups that want to put their disease-ridding skills to the ultimate test? That’s where Pandemic Legacy comes in.

Pandemic Legacy is a mashup of both the original Pandemic board game and Rob Daviau’s Risk Legacy. The concept is that you’ll be playing games of Pandemic Legacy throughout the course of a year, and there will be some added role-playing elements to the game that make is much more, for a lack of a better word, awesome. Players will have roles, like with the original game, but there will be more to them. You’ll name your character. As you progress through the game you’ll grab upgrades for doing well and scars for doing not so well. You’ll build relationships with other players. You’ll evolve just as the diseases do.

How it will basically work is such: you’ll play your first game and it will be in January of this year stretch in gameplay (dubbed as one of the “worst years in human history” according to the game). Whether you succeed or fail in this game determines what happens in the next game, which would be set in February. You’ll continue this for a year. You can also repeat months that you don’t do so well in, but you run the risk of making the world a worse-off place than before. Not only does this thicken the theme of the game, but it keeps the pressure on actually playing it.

Z-Man Games has finally released their first set of images for the game, including a video for what players can expect with it. I, for one, am completely excited for this and I cannot wait to get my hands on a copy of the game. Pandemic Legacy is available for pre-order right now, and it’s set to release during Essen this year. We’ll be posting more coverage of Legacy and all things Pandemic through the end of the year, so keep your eyes peeled for some disease-fighting goodness! Also, be sure to check out the Pandemic Legacy video below!