You are reading
Written Review – Ascension: Dawn of Champions 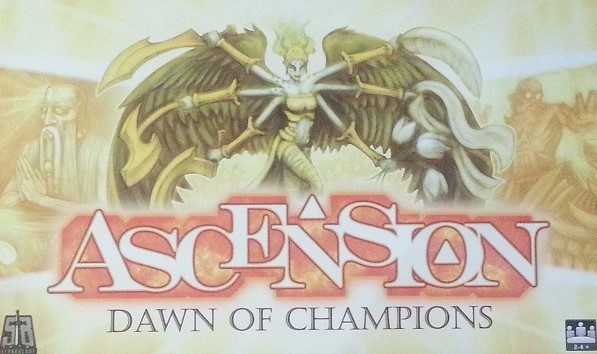 In the Ascension story, the events of recent games have caused the gods to retreat New Vigil and leave the fate of that world in the hands of mortals. In Ascension: Dawn of Champions, you take up the cause of one of the four factions and act as the Champion Hero of that faction to bring order and balance (or chaos) to New Vigil. Some new mechanics and incentives are featured in this new set, so let’s take a look at what this set will add to your Ascension experience!

Dawn of Champion’s contents look familiar to previous games with a few exceptions. Inside the box you will find the following:

For how to play Ascension, refer to our review of Ascension: Rise of Vigil!

In Ascension: Dawn of Champions, each player begins with an oversized Champion card in front of them. These are optional, but are the point of this set. Take the matching silver bordered Champion Hero card and place it under this oversized card. Various actions will add Reputation Tokens to the Champion card until you’ve accumulated enough to add the silver border Champion Hero card to your deck. These cards are not worth any Honor at the end of the game but can greatly affect your approach to the game. 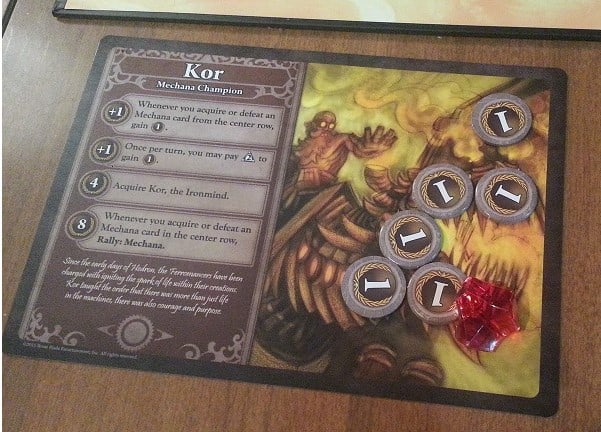 A new keyword in this set is Rally. Rally will indicate a faction (or other characteristic) which means that when you acquire/defeat a card, that if the next card drawn to replace it is of the faction that the Rally card specified, you immediately acquire/defeat it without paying its cost.

Multifaction heroes and constructs are continued in this set and count towards Rally effects. If you acquire a card that says Rally: Enlightened and the next card to come out is a Lifebound Enlightened Hero, you acquire it without paying its cost. 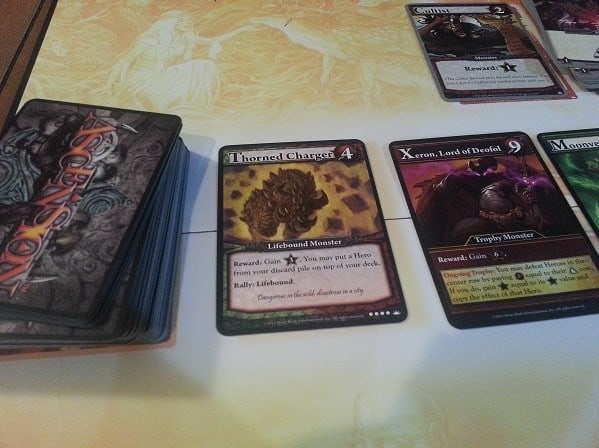 Monsters now also may have factions. They are defeated the same way as ordinary monsters but can be affected by Rally/Reputation powers.

I have been a big Ascension fan since the first time I played, and I was excited for Dawn of Champions. I was really looking forward to the Rally mechanic. The art in this set is beautiful. I’ve mentioned (in almost all of my Ascension reviews) how I love watching Eric Sabee’s progression as an artist through this game, and if you’re a fan of his style, Dawn of Champions will continue to impress.

I know that the Champion cards are optional, but I’d almost prefer to play without them. Depending on what cards are coming up in the center row, I found myself often being frustrated because I’d buy a card in my faction to satisfy conditions on my Champion card when there were better cards on the table, and rarely get a Rally trigger that was useful. At times I felt obligated to purchase cards within my faction rather than purchasing cards that would give me an edge. I did play a few games where I, for the most part, ignored my Champion card. I’d utilize it when I triggered it but I didn’t buy specifically to enhance my faction’s Champion, and I enjoyed these games more.

Some of my opponents, on the other hand, found the Champion cards to be very motivational. Players who may be unfamiliar with the game would probably find them to be very useful as they guide players towards building chain reactions within their decks and learn to develop those play styles. So, looking at this as a way to get people into Ascension, I like the Champion cards. But as a seasoned player, I find them distracting.

My game group collectively agreed that we liked the layout of the game board in this set more than previous sets. We had more new Ascension players wanting more with this set than previous ones. If you have friends that you want to lure into the world of Ascension, I’d recommend starting with this set. Ascension: Dawn of Champions retails for $39.99 and would be great for new Ascension players and seasoned ones wanting a smooth way to introduce new players alike.