You are reading
Written [P]Review – Henchmen! 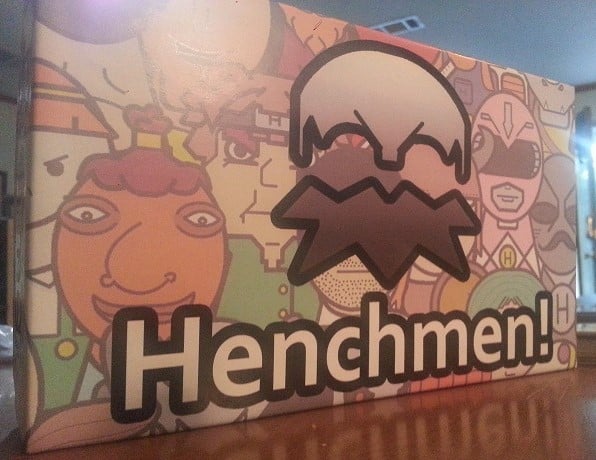 If you’re an evil mastermind or just like the idea of being called da’ boss, you better get yourself some henchmen. Disposable, foolish henchmen to do your dirty work and get the job done. However, not all henchmen were created equal. DFL Games presents Henchmen!, a card game for 3-6 players in which players control a handful of henchmen out trying to do jobs. Some of them have dirty tricks up their sleeves, but everyone must watch out for Super Jerk. That guy always ruins what fun you send your henchies out to do.

Our game came in a small box, but this box size is a prototype. We’ve been informed that the final box will be closer to the size of a sheet of paper and contain some inserts for card organization.

Also included in the set we received was a blank DIY (Draw-It-Yourself) Henchmen cards.

The set-up for Henchman! is very simple. Shuffle the Gear, Henchmen, and Job decks respectively. Place the Gear and Henchmen decks to the side, in addition to the stacks of $1 and $5 ca$h cards. Place the Job deck underneath them with enough room to draw a line of cards from it, this is called the Job Board. Shuffle the Tell Da Boss deck and place it to the side as well. Give the oldest player, or player who’s done the most time, the schemer token to signify the first player. Deal each player 4 Henchmen cards and 3 Gear cards, starting with the schemer.

Each round has a few steps. To start a round, you fill the Job Board. Draw cards to fill all 5 spaces on the board. If a Super Jerk card is in play from the previous round, no more cards can be played to that spot on the board. So, if you draw a Super Jerk card in round set-up, set it aside to shuffle back into the Job deck. The schemer starts with the oldest player, and passes clockwise on subsequent turns. Then, each player takes their turns.

Each player gets 2 actions per turn and they must use both. Additional actions may be “purchased” with the ca$h cards you earn from completing jobs. Action options include

The draw actions are pretty self-explanatory. Let’s talk about jobs. To do a job, take a look at the specific job you’re looking at. Some jobs have special rules (like what types of henchmen can do the job), so make sure you read this before attempting a job. The bottom left corner of the card will tell you what the reward is upon completion, and the bottom right corner will tell you how much “henchness” is required to complete the job. If you have enough, great! You have a chance at claiming bragging rights of the job, and of course, the ca$h! Take as many Henchmen as required by the job and turn them on their side so that “Thug Life” is at the top of the card.

It is possible to fail a job if another player plays a Gear card that increases the difficulty of your job.
Once a job is completed, it is immediately refilled from the Job deck. If a Super Jerk is played at this time, all players discard half of their Henchmen in the Thug Life (rounded down). What a jerk!

Some of the jobs are pretty difficult, and you can ask other players to help you with the job. Only one other player can help with the job, and terms must be set in regards to reward division, how many Henchmen they’ll contribute, if they want to trade something after the job is done, etc. This can be anything related to the game. Shake hands to “seal the deal”, and there is no backing out!

If a player fails a job, they will have to draw a Tell Da Boss (TDB) card at the end of the round. If a player doesn’t complete a job on their turn or help another player, then a TDB card is drawn as well.

Once all players have taken their turns, if a TDB card must be drawn, do so now. Afterwards, shuffle all jobs (not Super Jerks) currently on the board back into the Job deck, then turn Henchmen back to normal. The game starts back at the round top and game continues until all 5 spaces on the Job Board have Super Jerks! 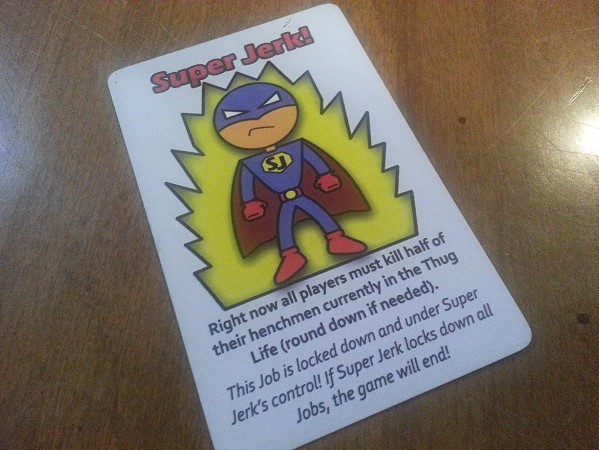 Okay, okay, we have to talk about these cards. Henchmen! is delightfully simple and full of cultural references. A good chunk of the fun we had from this game was talking about the illustrations and saying things like “This totally not Power Rangers guy is going to…”. That being said, the art is very basic but is not distracting from game play. I like the creative liberties that DFL Games took with this aspect of the game. 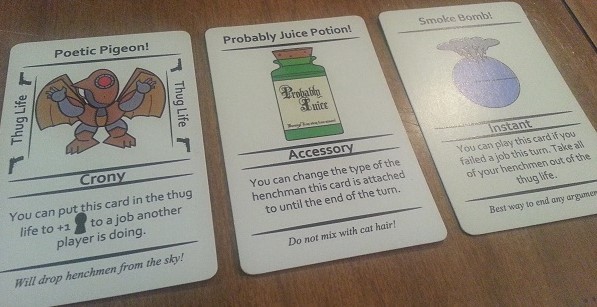 How’s gameplay? Fluid. We picked up the game quickly and I don’t believe that non-gamers would find this game intimidating. You can take a take-that approach or play the nice guy all the way up until the end. Being ahead in the beginning doesn’t mean anything, because you can send nearly all of your guys on a job and be successful, but if the job that replaces it is a Super Jerk you will lose half of your guys! Not so tough now are you?

I think Henchmen! has quite a bit of replayability. I can’t say this is something I’d be itching to get to the table all the time, but if I had the right amount of players and we needed a humorous game, I can say with certainty that nearly all of my gaming friends would see this at least once, and I wouldn’t turn it down if someone asked to play it. I think it deals a fair amount with strategy and less with luck so I can see many different types of gamers being attracted to this. 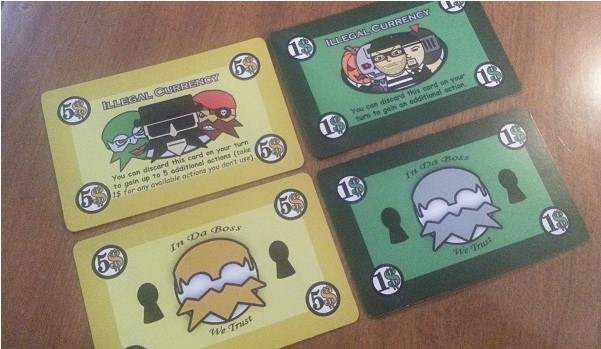 I like that the win condition (ca$h) has incentives to throw it away to gain extra actions.

I liked that the Tell Da Boss cards had the potential to affect all players. Yes, you are playing competitively against each other, but you’re all working for the same boss man and sometimes life just isn’t fair! It is a curve ball that I feel is pretty balanced. Some TDB cards only affect players that don’t do jobs or other certain criteria during that round. It is a variable that will affect all players differently every time you play. The game did last close to an hour so it isn’t a quick game, but if fate so chose, you could draw Super Jerk cards at the right times and end the game pretty quickly. Our shortest game was about 40 minutes, and our longest game was almost 1.5 hours.

Overall I found Henchmen! to be entertaining and fun. It is light-hearted and unique in its approach to making a name for itself in the gaming universe. The mechanics are pretty solid and the rulebook is clear so that you can get to gaming without having your nose stuck in the rulebook when you could be playing.

We’ve been told that a 2 player variant is in the works. I can see how this game would work with 2 players, but if players helped each other out on jobs, the second player would be out of luck, as likely most of the Henchmen on both sides of the table would already be in the Thug Life.