Red Dragon Inn is a…well….a very hard game to describe. It’s an alcohol consumption based competitive strategy game I suppose, at least that’s the best way I’d put it. It’s published by Slugfest Games, and to be fair, it’s much different than a lot of games I’ve ever played. The basis for the game is you are at a tavern after a grand adventure (be it a dungeon crawl, or killing a dragon, who knows?) and the characters are having a party and splitting up the loot they’ve collected. There are 4 characters in the first game (the version I have is the first one) but there are supplement packs and additional games you can purchase to extend the game past 4 players. It’s a very fast paced game, and can be a bit difficult for new players to understand, but once you get the hang of things, it’s a lot of fun.

So to start off, every player gets a player mat, a fortitude marker (red) which goes on the 20 at the bottom, and an alcohol content marker (clear) that goes on the 0. Each player also gets 10 gold pieces each and the rest goes to the middle of the play area for the Inn. Then each player decides on the character they’d like to play. I personally play as Gerki. He’s a thief and mostly beats players through gambling and stealing all their gold. There’s also Zot the Wizard who has a lot of spells to affect drinks, Deidre the Priestess who has a lot of healing spells and gambling cards, and Fiona who specializes in beating up the other characters.  Shuffle your character deck and place it on the player mat in the appropriate spot. Then shuffle the drink deck cards and place them in the middle of the play area as well. Take one card from the drink deck and place it face down on the “Drink me? space. Draw seven cards from your character deck and the game is ready to begin. 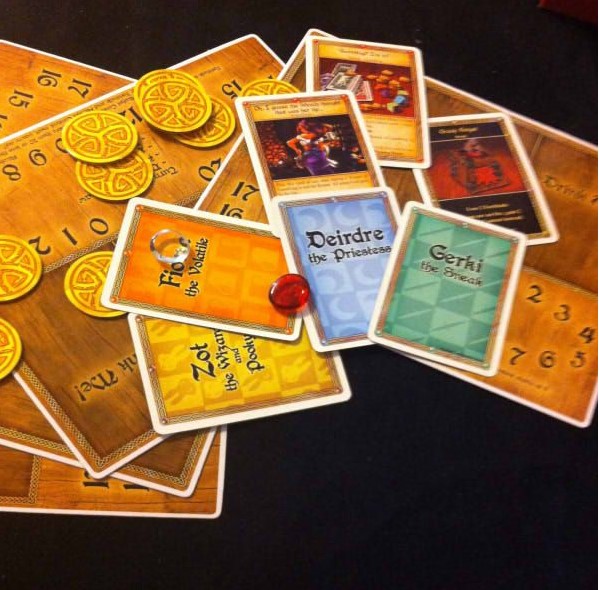 Each turn consists of 4 phases which are outlined on the player mat for reference. First you may discard and draw new cards. Discard any cards you don’t want and draw back up to seven. At the beginning of each turn you must draw back up to seven cards, you cannot play any cards or effects until you’ve drawn new cards. If you have seven or more, you can choose not to discard and draw. If you draw the last card in your character deck, reshuffle it and place it back in it’s appropriate space. Then you may play an action card. To play an action card, read the title and effect of the card out loud, pause a moment to allow anyone to respond in turn, then follow the instructions on the card and place it into your discard pile. If you play a “Gambling? I’m In!? card, you start a round of gambling, and normal play is suspended. Each player must ante 1 gold to the middle (don’t get this confused with the “Inn’s? gold) The player who played the “Gambling? I’m in!? card in winning or in control of the round, but that can be taken from them easily. Play continues clockwise from the person starting the round, and on your turn you may either play a gambling or cheating card to take control of the round, or pass. Make sure to read the instructions on any card you play because you may need to ante more gold to continue gambling. If you pass, you are still in the round, and may play a gambling or cheating  card later in the round as long as the round does not end first. To win a round of gambling you must be the last player to play a gambling or cheating card, and have every other player pass. As soon as the last player passes, the round ends immediately and the winner is awarded gold. There are other special gambling cards I won’t mention here as they are a surprise (seriously make sure to read the text on all your cards, not only are they hilarious but they are extremely helpful sometimes) but one i will mention here is the winning hand card. The “Winning Hand? card can only be countered by a cheating card, then after that normal gambling cards may be played. If you cannot play an action card at all, skip this step.

The next step is buying drinks. Take the top card of the drink deck and place it face down on (or give it to) any player of your choice’s “Drink Me!? pile. You don’t pay any gold for this, for the Inn keeps a tab, and you’ll pay for them later.Then you must drink. Reveal the top card of your “Drink Me!? pile and take the effects of the drink. At this point you may play cards to affect drinks, stop yourself from taking the effects etc. If you have no cards in your “Drink Me!? pile, then you start to sober up and reduce your alcohol content by one. After your turn has finished and everything has resolved play continues to the left. If you run out of drinks in the drink deck, each player pays one gold to the Inn and then the deck is reshuffled.

There are some special cards called Sometimes and Anytime cards in the game as well. As you might suspect, Anytime cards can be played….anytime, even if it interrupts another player’s turn, and can be played on any phase of any turn either before or after a special action for the phase. Sometimes cards however, must be played only if the circumstances on the card are met. Each Sometimes card has the conditions that need to be met at the bottom of the card. You may play multiple sometimes cards in response to the same game event, even if they are multiple copies of the same card. However, you can only play one card at a time, and give a moment for the players to respond each time.

You lose the game if you run out of gold and get thrown out on your thieving face by the wench, or if you pass out (your fortitude and alcohol content cross over each other). If you pass out, your gold is divided between the Inn and the other players still in the game. To do this, Split your gold in half, one half and any remainder goes to the Inn, and the rest is divided evenly between the others player. If you run out of gold or pass out, you don’t lose immediately however, you must resolve any cards that have yet to resolve and then get one last opportunity to play a sometimes or anytime card that could save you, If you cannot do so, you are out of the game, and last man (or woman) standing wins. The rulebook has a lot of clarifications in it about the rules if any clarification or questioning is needed, and it’s quite extensive in its descriptions and flavor text. 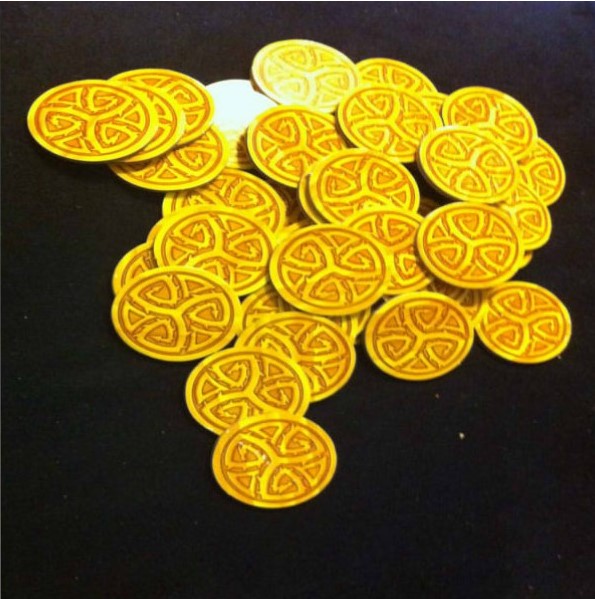 This Round’s On the House!!

I love this game. I love the elegance of this game, how much fun it is, and the jokes that can be made from it. However, much like any game, it’s not without it’s faults. I will begin, as always, with the good.

It’s tremendous fun. It’s totally unlike any game I’ve ever played, the theme is very solid, the idea of the game is brilliant and it’s fairly easy to learn. My friends and I actually turn this into a drinking game on occasions, and every time your character drinks, you drink, but that’s a very easy way to end up wasted and hung over very quickly, especially depending on the drinks you’re drinking. That said I’ve never had a game put such a smile on my friend’s faces every time I’ve played it, and never have I had a play session end in disappointment or anything other than utter happiness (even when my friend drunkenly threw his play mat and gold behind the TV and we spent the next 30 minutes looking for pieces. We still had a blast laughing about the whole thing, and still make fun of him for it to this day.)

That said, The game gets very confusing if you are drunk (as does any game) and some of my friends stop playing early, but usually someone takes over their position if they drop out and someone’s available. Also the gambling can be a bit confusing, or some players may opt to drop out of gambling altogether rather than spend their gold. Most of my friends know that’s my method of winning most of the time and know I’m good at bluffing (and definitely not cheating I mean….what do I look like a magician? *stuffs rabbits and doves into pockets*) so they avoid the gambling as much as possible. It detracts from the game a bit because it plays a big part sometimes and can be a lot of fun. Slugfest games does sell a book called “Gambling? I’m in!? that helps explain the gambling portion a bit better and has some extra gambling games that can supplement the gambling portion of Red Dragon Inn, and I’m thinking of using some of those soon. All in all, this game is really a lot of fun despite it’s flaws, and I give it a solid 8/10 for very fun gameplay, despite the backstabbing and hangovers.

Until next time friends, May your dice always roll 20’s and your DM be merciful!!