You are reading
Guest Post: Written Review – Betrayal At House On The Hill 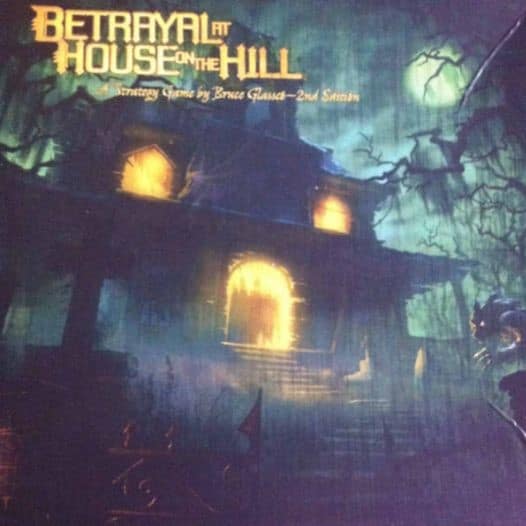 Betrayal at House on the Hill is a semi-cooperative, B-horror movie themed strategy game, set inside a sprawling mansion on a dark and gloomy hill. Published by Wizards of the Coast, it is my go-to party game for Halloween, and heck, all year ‘round. I personally have the 2nd edition, but I do believe the first version is available for purchase, but there are less scenarios to play through. It’s a wonderful game full of forging false friendships and bonds, until suddenly, that guy you thought was your friend is a cannibal set on devouring you and your friends’ flesh. It’s not a game that takes itself too seriously, and I respect that, instead, it places it’s themes more from those cheesy scenarios seen in many a horror movie over and over again (Think Syfy Original movies).  No two games will ever be the same however, but we’ll get to that a little later on, for now, let’s talk about the gameplay.

Wizards of the Coast

After setting up your game, shuffling the room tiles, omen, item, and event cards, and placing your sliders on your starting traits, you decide who goes first. Usually this is done using the birthdays on the character cards, whichever is closest to the current date without already having passed is your first player. You move the amount of spaces as your speed stat, which will change along with the other stats as the game progresses. When you move through a doorway (outlined on yellow on the sides of room tiles,) you must reveal a room tile from the top of the deck that has the floor you are currently on highlighted.

If there is a symbol on the tile (a bull head, a raven, or a swirly vortex thing), you must stop in this room and pull the corresponding card (this only applies for the first time the room tile is pulled, any movement through this room later continues as normal). Each set of cards contains something different, Swirly things are Events which could be good or bad depending on how well you roll, or might reveal secret means of travel in the house. Bull head symbols are items, which are almost always good, but some may have adverse effects attached to using them. Ravens are omens, which drive the story along. You might find a little girl, scared and alone, crying in the corner of the master bedroom, or maybe a frothing, raving madman who runs screaming into you at the underground lake. Maybe you find the faithful dog who retrieves items for you. Either way, when pulling an omen, read the card aloud (as you would the other two card types) then move the omen counter up one number.

You then make a haunt roll. A Haunt roll consists of rolling 6 dice (each die only has 0,1,2 on it’s sides) and adding up the total rolled. If this number is less than the current number of omens revealed, then the haunt begins. The game begins cooperative, joining forces to find good items, working to open up every room in the house, but once the haunt begins, a traitor is revealed. Inside the Traitor’s tome included with the game, there is a chart on the first page, to find which scenario you are playing, you line up the omen you found to begin the haunt and the room you found it in. This will be the scenario number you are playing, just flip over to that page, and begin. Usually when I play, we send the traitor off to another room to plot silently while the remaining heroes read about what they know and discuss a plan. once everyone has seen what they need to do, play resumes, however your former compatriot will now be trying to kill you, eat you, sacrifice you, or just fuse you into their ever growing body of bubbling oozy flesh.

Play continues until one party or the other meets their individual goals detailed on the scenario page. After the haunt is revealed, you can attack opponents using your traits. Much like with the event cards you will roll the amount of dice equal to your current stat. Let’s say you want to make a sanity attack (using special items that allow you to do that most of the time), or your event card says to make a sanity roll, and your sanity stat is at 4, you would roll 4 dice and total up your number to see the result on the card. In the case of the attack however, the monster or player would then make a sanity roll of their own to defend. Also once the monsters are out and about throughout the house, moving through a room containing a monster requires an extra space of movement to slide by unscathed. If you’re out of movement, prepare to engage the beast in some way or another, because it’ll most likely attack as soon as it can.

A Betrayal of Trust

This game is immense fun through and through, however there are a few cons, which I’ll definitely get to later. For now, however, let’s talk about the good. There’s massive replayability with this game. Every time you play, the scenario will be different, the board will be different (seeing as you build the board as you play) even the events drawn, character’s stats, etc will all be different every play session, and if you run out of scenarios (good luck with that) I’ve heard there are some online to supplement them, making for even more hours of play time. I have played this game at least 25 times since I got it, and not once has the game been exactly the same. It’s fun, it lends itself to roleplay, it’s full of cool mechanics, gorgeous artwork, wonderfully morbid descriptions during events, and is very very easy to pick up and start playing. Yes it’s a bit more rules heavy but that’s not necessarily a bad thing. Also you never know who the traitor will be until the end so, in a sense, you were helping the traitor succeed during the beginning of the game, encouraging them along, helping them get cool items and trading with them, only for them to turn on you, fangs bared, chasing you down a hallway with a bloodlust in their eyes.

That said, the scenarios are sometimes unfairly balanced. In one scenario I’ve played before we were in a flooding house. The traitor got to raise the water every turn or so, and we had an objective to complete in every floor before the house was fully flooded. It was almost impossible to do, and as such, we ended up drowning on separate floors trying to do what we needed. In that same vein however, I’ve played scenarios that the heroes complete in seconds, they complete their objective, escape the house, and live happily ever after and I didn’t even get a turn to be the monsters.

Some scenarios work out to be fairly balanced, both teams are on even playing grounds, and it’s a challenge for both parties to complete their goals, but some are very very unfairly balanced towards once group or the other and it could use a bit of tweaking to make those a bit more fair. I mean having a huge bulky, over-powered werewolf slash you down in one hit can get pretty old pretty quickly and cause players to turn away from the game because the tome and survival guide are secret. Which leads to my next point, since the traitor keeps the tome’s contents a secret, and the survivors keep the guide secret, it makes it very easy to cheat. Either party could totally make up rules for their benefit and neither party would be the wiser. Now I know the scenarios pretty well, and it’s pretty easy to spot a lie about the rules now, but I have had a few traitors cheat to get ahead, just like I’ve had survivors cheat to get ahead. I just wish there was a better way to keep the rules secret without them being broken by either party. All in all, I do love this game, and it’s a fairly frequently requested game at game nights next to Zombicide and Last Night on Earth. I personally give the game a 7/10 it could use some work but it’s still very fun and worth the buy.

Welp, until next time friends!! May your dice always roll 20’s and your GM be merciful!!