This past weekend I ran a game of Dread with one of the few groups I host a game night with, and let me just say, it was one of the most fun games I’ve ever been able to GM. There are no dice, no numbers to keep track of, and honestly, I’d say if you’re looking for a great game to get a newbie group into RPG’s, this is definitely the game to do it with. For those of you not familiar with the game, Dread is a horror-themed RPG based more on storytelling than fighting and statistics, and is published by The Impossible Dream.

I was lucky enough to grab myself a physical copy of the game when they had their limited print, but I’ve heard more may be in print soon. However, the PDF is always available and definitely worth the read. The book itself is just a simple collection of rules and suggestions for how to run the game, along with variants to the….rather odd system it employs. It’s a beautifully designed book by the way, if you’ve never seen it, a picture will be below, but man. Simple white cover, the word “Dread” in large typeface, and a bloody crimson handprint along the spine. It’s also littered with lots of gorgeously morbid artwork that, as an artist myself, makes me shiver with glee. 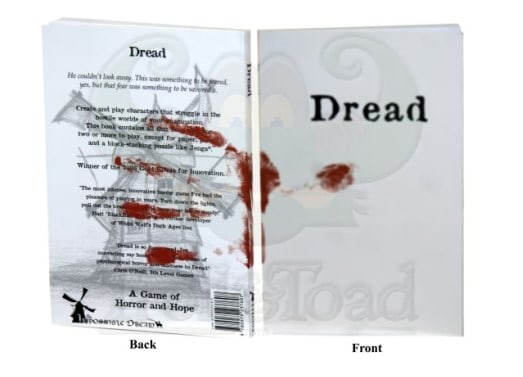 The characters in the game are simplified down to a questionnaire. Simple questions like “What is your greatest fear, and why?” or “What is the recurring dream you have, and how do you interpret that dream?” Players are definitely encouraged to expand as much as they’d like on their characters and go in as much detail as they’d like, the more the better. You want your players to be attached to their characters enough that they don’t want them to die, yet not attached enough that they’re not willing to tell a good story by putting their characters in dangerous situations. It’s not always just about winning the game, it lends itself to, and in fact wants you, to just tell a good story. Have your characters explore the mysterious mansion on the dark gloomy hill, let them take a stroll through ancient catacombs, and feel free to open that door that’s rattling from the screams echoing on the other side.

The game is works on a simple mechanic; Jenga. While it may sound weird it actually works quite nicely. The tower is built at the beginning of the game, and, in some games, three blocks are removed for every player less than five. Only have a group of three players? Better pull six blocks!! If that’s the case, you let your players pull the three blocks, and from that moment on, if the tower collapses for any reason (except for the GM hitting the table….that totally never happened I promise.) then the offending player is removed from the story. Now you can always have them run off into the night screaming mad, but as long as it’s far enough into the story, I like to kill or incapacitate my characters, but get creative!

Another cool suggestion the book makes is the use of a “doomsday clock”. Basically if a character is too clumsy and knocks over the tower early on, they are doomed. They will die eventually, but not necessarily right away. You can even let them pull to delay the inevitable, but eventually, when the time is right, they have to go, and that character can never finish the game with the group. For every action a character might feasibly be able to do, like stabbing the giant bat creature in the eye, loosing an arrow into the werewolf’s chest, etc, a player pulls a block (more difficult actions may require more pulls but that’s up to the GM.) The players can also make “perception checks” by pulling voluntarily to get hints or clues from the GM. My group utilized this a lot to figure out that one of the werewolves in their story had been one of their previously “killed” compatriots, or that the phone line in the creepy cabin in the woods had been cut well before they thought to use the phone.

As I said earlier, there are some variants to the Jenga tower, one of which being stacking dice, or building a house of cards, and while conceptually seem cool, none seem very well thought out. The coolest bit about the Tower is that it actually contributes to the feeling of “dread” (see what I did there?) you feel during the game. It all begins to crumble like the sanity of the characters, and as gaps form in the tower, so do gaps appear in the realities of these characters. The tower becomes this symbol or metaphor for the game and is, to me, an absolutely ingenious mechanic.

All praises aside, the game does feel very “Make everything up as you go along” and if that’s your thing (I loved improv in my theatre department in highschool so…) then you’ll love this game, but for those of you who want more structure, more cohesiveness, or more regulation over the game, you won’t find it in “Dread.” The book itself is more suggestions than anything, and while it’s not absolute chaos, it feels like it has the potential to be if not kept in check. You can include or leave out as many rules as you’d like, as long as you keep to the basics you’re fine. My group felt very apprehensive about decisions because they thought I was making up rules as I went along and I had laid out a written set of rules for myself to follow as well as a (very much branching) story outline. They thought I was making up elements of the story just to kill them or rid them from the game and I wasn’t, and while I did have to improv a good portion of the scenes as we went based on their decisions, I did have the key elements all jotted down.

Speaking of ridding characters from the game, I feel that once they are gone, the players just lose interest and head off into other rooms to play computer games or distract other players with funny cat pictures while everyone else tries to survive, and it takes the horror element from the game. My group ended up having two people left at the table for the final battle and everyone else giggling in another room, and it took away from the atmosphere of the game.

All in all those are really my only complaints with the game, otherwise I’d say this game is definitely a must-have. It’s fun, heart-pumping, anxiety inducing at times, and an absolutely fantastic way of introducing new players to RPG’s. This was the first RPG I ever brought to this group, and now they want to move up to D&D eventually, which honestly makes me the most proud I’ve ever been. But it’s also very, very fun for those who’ve had prior RPG experience. If I had to give it a rating, I’d definitely have to say it’s an 9/10 in my book. So, that being said, go out and give it a look, I’d definitely recommend it!

Well my friends, with that it’s time to say goodbye for now. May your dice always roll 20’s and your GM be merciful.