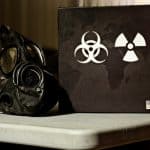 You are reading
Written Review – Tomorrow 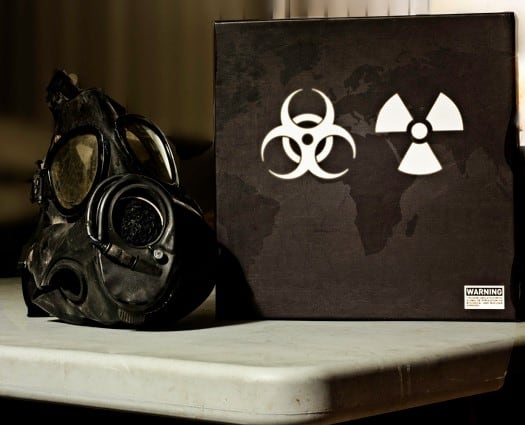 Hurricanes, tsunamis, tornadoes, meteor strikes… what’s the greatest threat to mankind? In the world of Tomorrow, we are our own greatest enemy. Overpopulation is taking its toll on the earth, and resources are running low. Leading scientists have convinced world leaders that the only way to prevent the extinction of the human species is an orchestrated depopulation program, bringing the total number of humans on the planet to a manageable level.

Released by Conquistador Games in 2013, Tomorrow casts you as one of the world leaders burdened with the messy responsibility of depopulating the planet. Through biological attacks and nuclear warfare, you will bring the overall human population down to manageable levels- but do the ends justify the means? 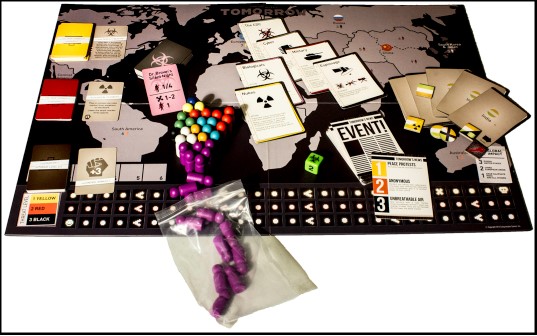 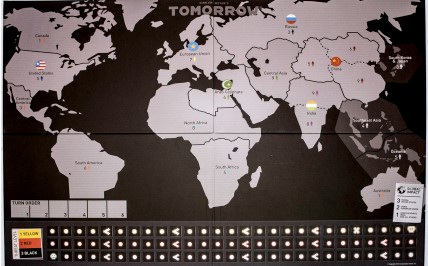 Setting up the game takes a few minutes, but one you are familiar with the game it is fairly simple. The game board goes in the center of your play area, so that your players can comfortably sit around the map. The colored population markers are placed in their respective territories. Each territory on the map is labeled with the color and number of pawns you should place, making this part of set up incredibly easy. 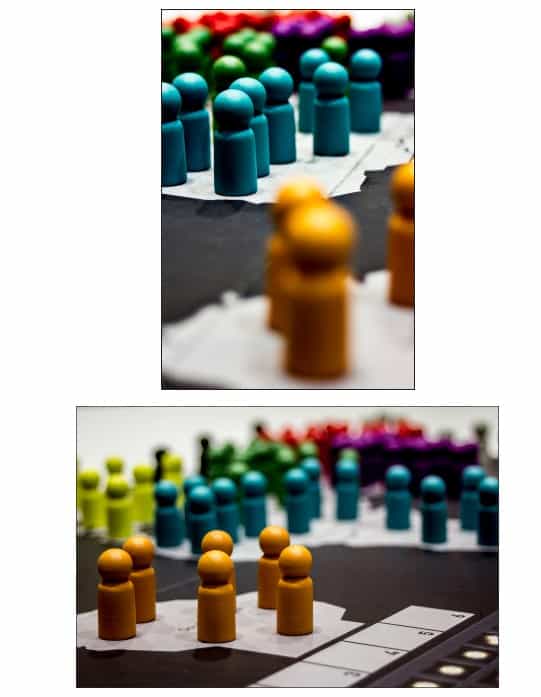 The disease, event, and strategy decks should all be shuffled and set alongside the game board.

Place the death marker- a small, round token marked with a skull- on the death track. This is how you will track your success or failures through the game.

Each player will be assigned a world power for the duration of the game. Each World Power has a deck of six standard actions, plus one special ability unique to that power. The available world powers are the United States, Russia, China, The European Union, India, and the Arab Caliphate.  In a five player game, remove India. In a four player game, remove both India and the Caliphate. Assign the world powers to players in any manner you choose, though rolling for selection order seems to work well.

Tomorrow takes place over the course of nine rounds. Each round is broken down into five phases.

If the players have not successfully reduced the population by the end of the ninth round, the game ends. Everyone is dead. There is no Tomorrow. 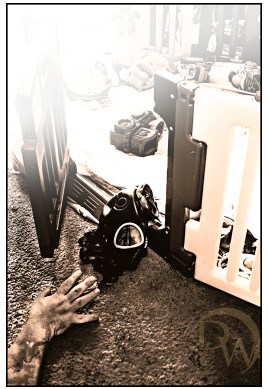 to see more from this series, visit http://www.devonweir.com/thedayafter/

If the death marker reaches the victory icon on the threat tracker, the game immediately ends, even if other players have not taken their turn during the round. Players proceed to scoring and determine which nation has become the new superpower in the world of Tomorrow. 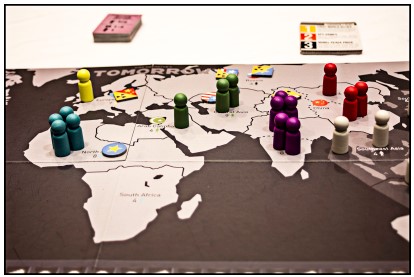 Tomorrow is a very, very dark game. Tomorrow is not politically correct. The subject matter is not for everyone, and that is understandable. The entire premise revolves around mass murder, genocide, and inflicting biological horrors on (presumably) innocent people. The game casts the players in roles not unlike the one President Truman played in the bombing of Hiroshima and Nagasaki. As leaders of their respective nations, the players would be hidden in bunkers or flying in a well defended aircraft, issuing orders and imposing their will upon the world. It’s a hard pill to swallow.

Somehow, Tomorrow became one of my favorite games. The amount of negotiation I have experienced in all plays of the game has been immensely satisfying. The cunning player can play others against one another, while a strong personality can simply use her commanding presence to “encourage” opponents to focus their attacks elsewhere. Table talk is heavily encouraged, as is negotiation, lying, and backstabbing. One of the most satisfying aspects of the game is that actions really can have consequences. If a player unleashes a devastating disease on a neighboring territory, it could very well spread into the player’s capital. If someone unleashes a nuke, it could well result in a string of nuclear attacks that doom everyone. And if a player lies to convince his neighbor to attack elsewhere, that lie could come back to haunt him.

The designers of the game estimate that play should last approximately two hours. My experience is that the more satisfying games have lasted at least three, due to the amount of negotiation and browbeating that occurs. This is a game you want to play with people who aren’t afraid to talk at the table- the more chatter, the better the experience.

The game is also beautiful, despite its ugly premise. The game board is visually appealing, yet incredibly simple in design. The monochrome scheme of the game environment successfully illustrates the bleak nature of the game’s theme, while the brightly colored population pawns call attention to the rich, vibrant people and cultures the players are massacring during their turns.

There is some poorly phrased content in the materials, unfortunately. Some of the Event cards describe conditions that required discussion with others on an online rules forum for the game. Some effort in clarification prior to printing might have prevented this issue. These issues are easily remedied and are few compared to other games on the market.

This is a game I continuously want to come back to. As written, the game is exciting and challenging. When the standard rules begin to feel exhausted, it is easy for players to implement house rules to change the way the game plays, breathing new life into Tomorrow with minimal effort. Fortunately, this is hardly necessary, as the game stands on its own game after game.