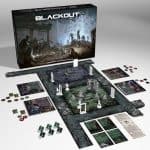 You are reading
Dungeon Crawl In A Post-Apocalyptic World with Blackout: Journey Into Darkness 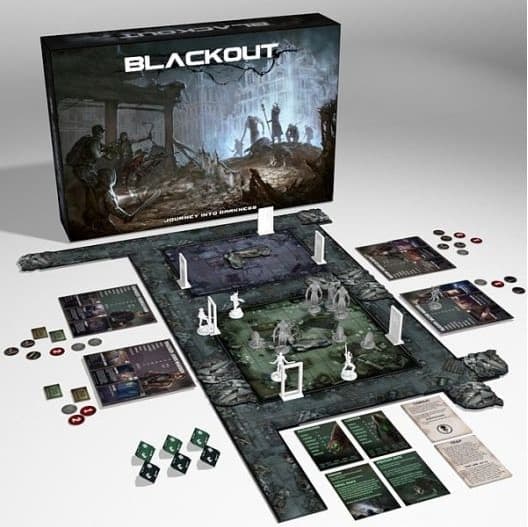 In the blink of an eye we lost everything. The Event robbed us of our normal lives. There was nothing we could do, and now we’re scraping at the surface to try and cling to any sort of life like we had before. The Black Zones are full of those fiends. Just the other night one of the rat-things almost took Ben’s arm. We finally put the thing down with a well-placed shotgun blast, and we were able to save Ben. Something’s not right with him, though. He’s been going in and out of consciousness for nearly two days. He keeps whispering about “the Harbinger…”

If you were to take a ton of things I like and mesh them together in a board game, Blackout: Journey Into Darkness would be that game. It’s a dungeon-crawl board game set in a post-apocalyptic world where everything humanity knew has been ripped apart. A new race of beings has risen in the once-inhabited cities of old, and humans have been pushed to the brink. It’s just as gritty as you think, and Richard Broadwater has brought this madness to Kickstarter.

The game has relaunched with better shipping options and tons of story. Players will take the role of one of four different survivors in this new world, each representing a different class. As a group players will cooperatively head out into the wasteland to explore “Black Zones”, old cities that were once heavily inhabited by humanity. Along their journey they’ll face horrors that have replaced the citizens that once took residence there.

Blackout has a continuous mission campaign system, and it can even be played solo. What’s awesome about it is that there’s plenty of replayability wrapped up in its box contents. The map tiles are double-sided and can be placed in many different variations. Also, can we talk about how awesome those miniatures look? They’re amazing! The big nasty dudes give me the creeps, and when it comes to this sort of stuff I love the creeps. The artwork is serious business, and the game looks like it’ll be lots of fun. For $85 (at the moment) you can get a full copy of the game, including stretch goals, and have it shipped right to your door in the U.S. The campaign is one-third of the way funded and there’s still a full month to go. Make sure you head on over to slap down a pledge on this one, because I know it’s going to be worth it. Hurry, before the Harbinger takes control of your psyche!