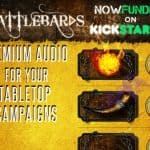 You are reading
Battle Bards Brings Authentic Audio to Your Tabletop, Now on Kickstarter

Some time ago we wrote about an auspicious Kickstarter campaign called the Realmsound Project. The project was started by the Orange County Gaming Group, a collection of talented people that came together with the passion to make the tabletop gaming experience something to be remembered through the ages. The group set out with one goal: to bring amazing audio files to the masses in such a way that’s easily accessible, manageable, and customizable. The campaign bred a soundboard that allows users to effortlessly pull in audio files and use them for their gaming sessions.

Returning to Kickstarter, the group has created Battle Bards – a brand new web-based service that will bring over 500+ audio tracks spanning music, sound effects, voice-overs, and soundscapes to tabletop gamers everywhere. Created and designed by the OCGG team specifically for tabletop gaming, these audio tracks will take players from deep caverns in the mountains to elegant Elven forests in far away lands.

Some of you may ask, “Well, what makes Battle Bards different from the Realmsound Project?” Luckily the OCGG team is ready to elaborate. First of all, the brand new soundboard the team is designing will make it easier for players and GMs to organize their audio files for quick-play and accessibility during gaming sessions. Secondly, a new tool called the MIXER will allow users to script their own scenes by combining various audio tracks together in one seamless playlist. The aim behind Battle Bards is to expand on the Relamsound Project and make much more audio available to users that will really help build the walls of unique worlds for your gaming experiences.

The Kickstarter is running pretty solidly, and I have to say that the soundboard is looking sweet. The board is in its pre-beta, and already I can tell that it’s going to become a new must-have tool in any GM’s arsenal. What I’m using is the Realmsound Project soundboard, which was edited and worked on through the last Kickstarter. It’s to be thought of as a proxy for what Battle Bards will be, as it’ll be purely web-based. I’ve been listening to some of the new Battle Bards sound files from their Soundcloud, and I’m already hooked on what they’ve got to offer. The Kickstarter has already funded, and now they’re busting through stretch goals. If you’re looking to expand your RPG experiences with tools that will make them something to be heard as well as seen, check out the Battle Bards Kickstarter and consider pledging to get in on this amazing piece of technology.