You are reading
Written Review – Smash Up: Pretty Pretty Smash Up 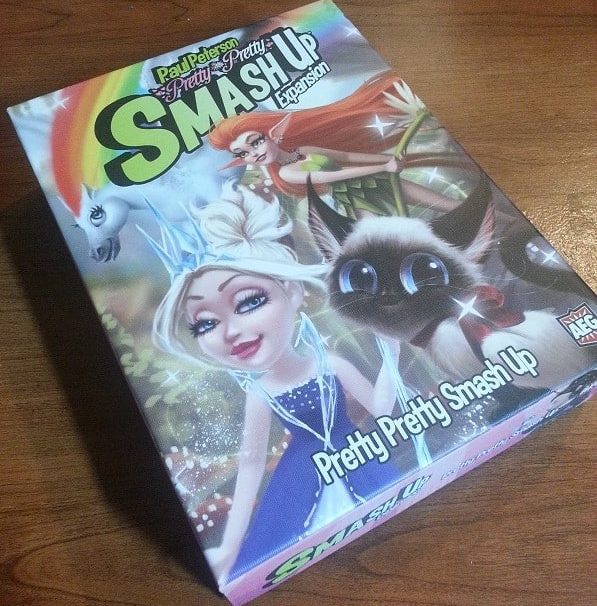 When you think of all things cute, fluffy and sparkly, usually “destructive” doesn’t mesh with those words. Neither does “manipulative” or “controlling”. However, all of that is about to change in AEG’s latest Smash Up expansion. In Pretty Pretty Smash Up, Mythical Horses come galloping in on their rainbows, Kitty Cats sneak in with epic cuteness, Fairies will sprinkle fear, and the Princesses gracefully aim to bring about doom on your heads. Let’s look at what these four new factions are up to behind their pretty facades.

Pretty Pretty comes in a box the same size as previous expansions. Included is :

*This review is purely to examine the mechanics of this expansion and does not include a how-to-play section. Please read how to play Smash Up in our review of the base game!*

First faction that we’ll address today is the Kitty Cats. The artwork is fluffy and cute, and will give long-time lolcat fans some laughs. Kitty Cats deal a lot with the idea that they have many lives – thus a lot of “Destroy minion, do X” abilities. They also entice other factions by taking control of enemy factions for a turn and subduing them with the cuteness. Additionally, the more, erm unpleasant cats, reduce power of enemy minions for a better chance at taking first place when a base breaks. They also have a few ways to move minions around, and would pair well with Pirates or Ninjas.

Next up : Fairies. These little sprites have some tricks up their sleeves. While they don’t deal a lot with brute strength, they manipulate -everything-. From moving actions to other minions, shifting power between minions, drawing cards, return cards from play to the owner’s hand, and more. The best offense for the Fairies is to reduce their opponents to tiny annoyances and assembling the perfect takedown. The Fairies are a fantastic back-up faction for a tricky faction like the Wizards, and for pumping up larger factions such as Robots.

The Princesses only have 6 Minions, and they are all power 5. What? Yeah, you read that right. Each minion has a talent they can use turn-to-turn such as adding Heirloom cards to your hand from the discard pile, destroying minions, moving minions, and more. The Princesses use Heirloom cards to give themselves +1 Power, and the Heirloom cannot be destroyed. They deal with a lot of moving around on the board, and drawing back out of the discard pile. Princesses would work well with Tricksters or Time Travelers.

And lastly, the Mythic Horses. If you’re imagining some sickly inspirational here, you won’t be disappointed. The Mythic Horses draw their power from banding together with the power of friendship and togetherness. This means a lot of buffing your minions based on how many other friendly minions are there, drawing cards based on groups of minions, and playing extra actions where they already abound. These would do great with a faction that power-houses through bases and moves such as the Werewolves.

The bases, as in previous sets, play off the strengths of each faction as seen below. 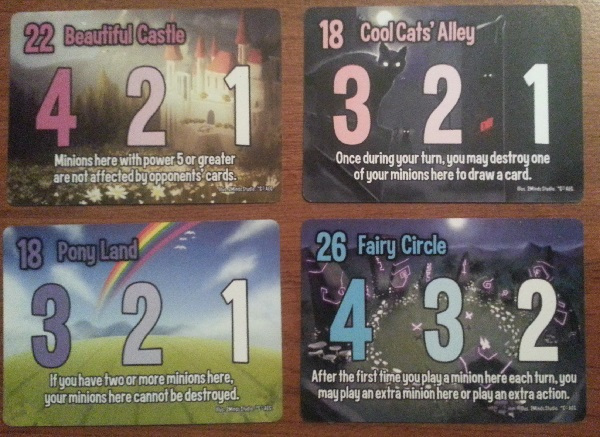 I think this set was highly anticipated for the sheer fact that it appeared ridiculous. I can’t say that people are wrong, but I don’t necessarily think that is a bad thing. While the box looks to be heavily themed towards frilly girl topics, there’s something to be had for all. I found myself chuckling at most of the cards, whether they brought memories or were just absurd.

I do think that a certain recent Disney hit may have been capitalized on here, however, it didn’t steal the show even in the Princess faction.

The faction as a whole however did have a “steal the show” kinda approach. Swoop in at the last moment and bring all of these giant Minions with them. I found it odd that there were only 6 Minions but they did hold their own in our games. 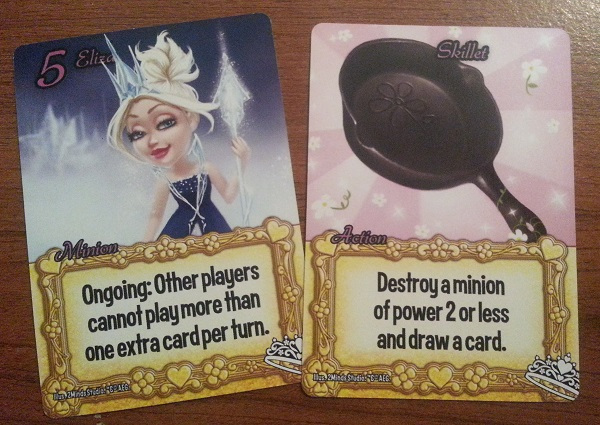 The Mythic Horses surprised me the most. I didn’t know what to expect with them, but I wasn’t expecting them to be so effective. As I saw the “Friendship Power!” and “Togetherness Power!” come forward, I thought “Oh, of course,” and it made so much sense. Touching on generic unicorns, fat little ponies, and even reaching into the world of Robot Unicorn, no fantastical horse was spared from this collection. I didn’t anticipate it but the Mythic Horses took my 2nd place for this set. 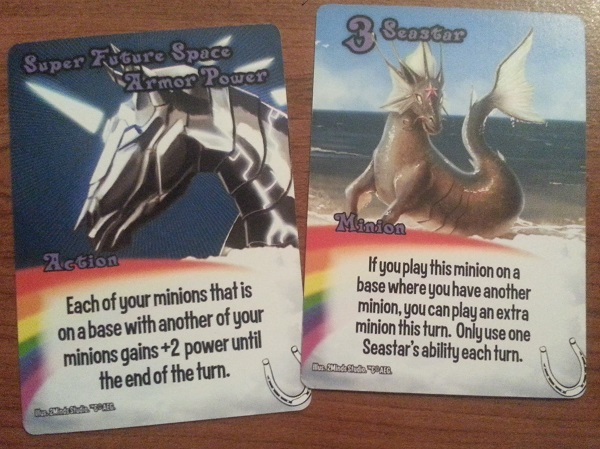 I may or may not have hummed the RUA theme song while I played this faction.

As their own faction the Fairies didn’t impress me much. I think they are a great support faction but would need to be paired with another faction that has a lot of power on its own to enhance it. One game of Fairies and Time Travelers together proved how frustratingly mismatched this faction can be. This is the only faction from this box that I felt wasn’t as balanced as the others. 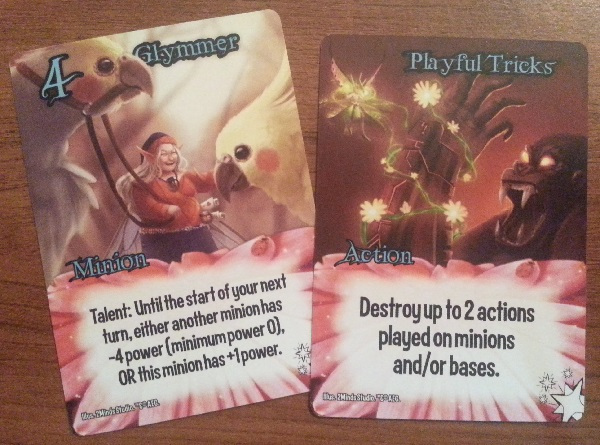 And my favorite faction from the set for more reasons than one, Kitty Cats. I love cats so I obviously was most excited about this group, but it didn’t fail to deliver what I was hoping. Playing on old lolcat memes, bringing both the cute and the ugly from the cat kingdom, and mixing in some modern day cat fan-dom made this faction incredibly entertaining as well as effective in taking down enemy factions. 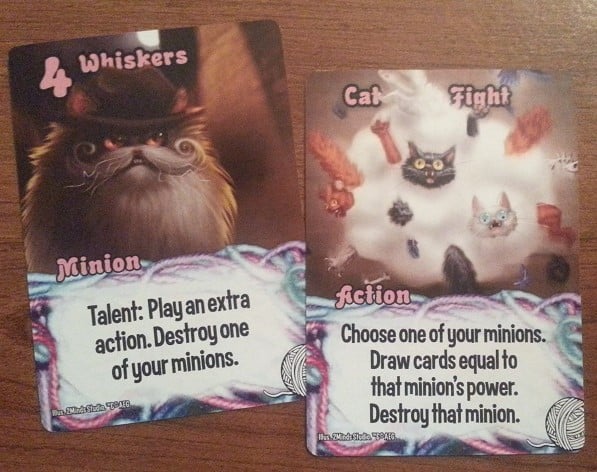 This is the first set produced after the Big Geeky Box was released, so it was the first set to come with its own dividers which we will see in future expansions. You can see below the size comparison of the dividers to the cards.

Pretty Pretty Smash Up retails for $19.99 and can bring a whole new world of cute frustration to the table. If you can get past the fact that the box is pink and covered in flowers long enough to realize that frightening things can come in cute packages, then you’ll have a lot of fun with this set.