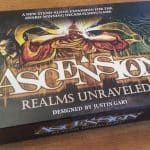 In the storyline of Ascension, a being named Adayu has long protected the five realms of Vigil. However, the centuries have started to wear away at Adayu’s mind, and when a single thought of his can change reality, what will happen to the world as we know it? From chaos, order is born, and in Realms Unraveled, we see new heroes and new mechanics that will enable you to restore Adayu’s mind to rest. Let’s look at the newest Ascension game and how it stands on its own against its predecessors.

Ascension: Realms Unraveled still features the beautiful art of Eric Sabee. Included in the box is:

Changes To The Game

Crash course How To Play : The center deck cards are shuffled into a large pile, and the top 6 are revealed to form the center row. Each player starts with 10 cards (8 apprentice, 2 militia). Shuffle these cards, then draw 5 from them – these are your hand. Play militia (power) to defeat Monsters, and play apprentices (runes) to pick up Heroes and Constructs. Replace cards in the center row as they are purchased/defeated. At all times there are Mystic, Heavy Infantry, and a Cultist for purchasing/defeating. Place all purchased cards in your discard pile (if a Trophy Monster, Hero, or Construct) or the Void (Monster that only earns honor points). Place all cards played this turn into your discard pile, and draw 5 more. If at any time you can’t draw, shuffle your discard pile to form a new one. Defeating monsters will earn you honor points, a number indicated inside of a black star icon, which are taken from the collective honor pool.

Something new with Realms Unraveled are the Transformed Heroes. We’ve seen these before, but now you have an option of whether they are flipped over to reveal the transformed hero, or 2 sets of single-sided cards with the Transformed and non-transformed versions. Which method you use is based on personal preference.

Another new feature in Realms Unraveled is the Multi-unite mechanic. Some cards will say “Multi-Unite:” with an added effect that will go off if played with other heroes of that same faction. In fact, that ability goes off for every hero you play that turn that shares a faction.  The order you play these cards doesn’t matter – Multi-unite affects all cards played that turn whether before or after it is played. 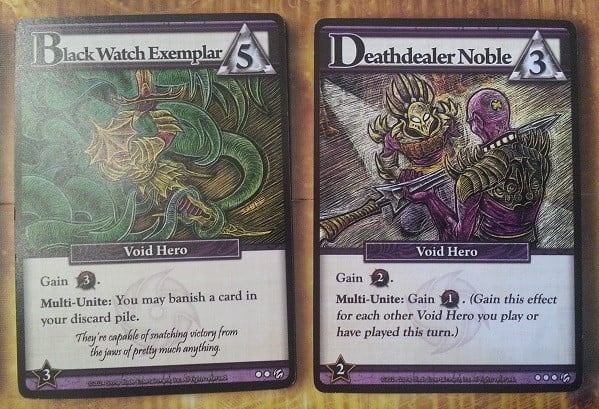 Transforming The Way You Play The Game

I first got to play Ascension: Realms Unraveled at Gen Con just before a large tournament took place using the new cards. As always, I thoroughly appreciate the art style. I know it isn’t for everyone, but I love the high contrast work, and Eric Sabee just gets better as time goes on. Something I really enjoyed was the new multi-faction heroes. I tend to cling to Lifebound and Void heroes in games of Ascension, so getting more options was very appealing and versatile.

The way that our games frequently went is that one person had a HUGE pile of honor tokens, while the other had just a few. Seems like the winner should be easy to see before end of game. However, the scores ended closer than we thought or even resulted in the player with fewer honor coming out on top. Why? Different strategy has a lot to do with this. If you’re in the business of killing a lot of monsters, your honor pile is going to build up quickly. However, players that aim to create smooth hands with many combos, will find themselves with not as much honor but hands full of cards that will earn them honor at the end of the game. Some may feel that this is unbalanced, but I disagree. This is strategy and thinking ahead. 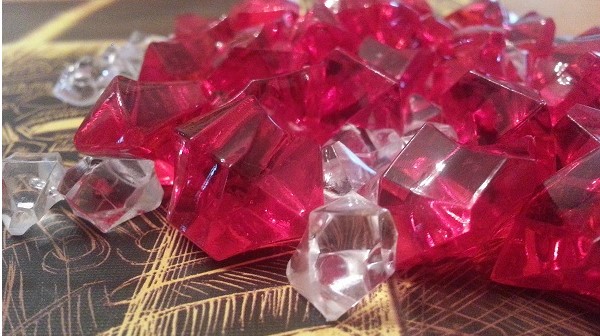 Ascension was the first deck-building game I ever played, and I’ve gone back and forth on what is my favorite set (because I absolutely own them all). I have to say with full honesty that Realms Unraveled is, by far, my favorite set. I do wish that Events would return to Ascension, but there’s nothing saying you can’t take the Events from Storm of Souls and throw them into this game (which in incredibly fun by the by). Realms Unraveled stands on its own with its unique mechanics and new features, but blends very well with other sets if you want a giant game. 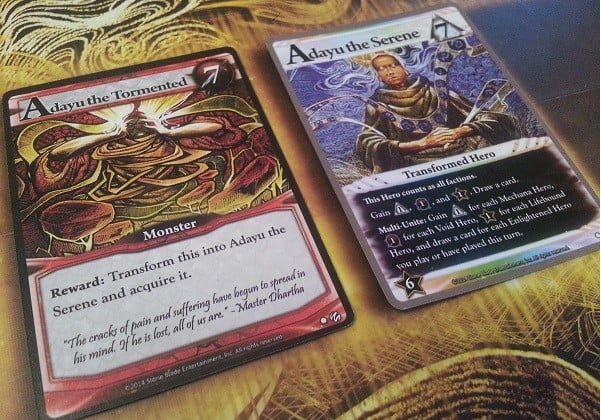 The full onslaught of the multi-unite effects drive you to build decks based on the same hero faction, but don’t restrict you with the new multi-faction hero mechanic. I don’t like games that push you into a way of playing (whether it is by faction or strategy), and I believe that Realms Unraveled gives you that freedom. Want to go after monsters? I’ve seen many wins that way. Want to just build giant fluid decks? I’ve seen that work too. But they all work differently based on what you want to pick up into your hands. I’ve changed my play style in every game because of what was available. Therein also lies the beauty of Ascension – if you ever feel that you’re seeing the same stuff too much, combine it with another set! 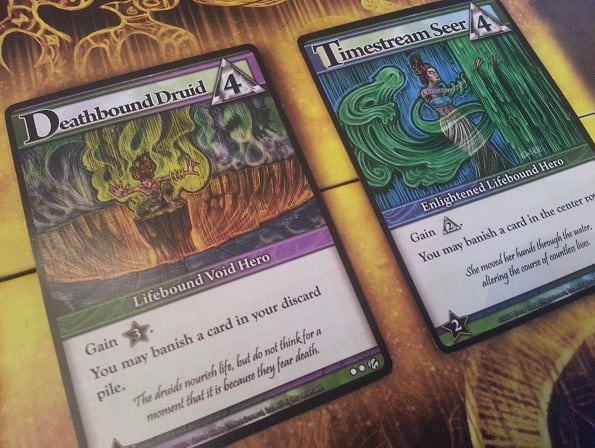 Ascension: Realms Unraveled retails for $39.99 and I believe could really enhance one’s game collection. For those previously hesitant to Ascension games, I believe it has a high level of versatility in the multi-faction heroes, without too much complication of energy shards that we saw in Rise of Vigil. I personally feel that Realms Unraveled is very balanced and would do well to add to existing Ascension collections or as a solo game.