A shadow has befallen the kingdom. Undead now walk the Earth, continuing to multiply under the control of a powerful Necromancer. The once stalwart army that stood under the king is now broken, shattered by darkness and blight. Those who still stand against the pestilence of the land seek refuge in the hallowed halls of the Monastery, safe from the encroaching dark. The Necromancer is tightening his grip on the land and his power builds. A great assault is about to crash against the Monastery, and it’s up to a few brave heroes to defend the land in Darkest Night, a strategic board game from Victory Point Games.

Here’s what Darkest Night comes with, right out of the box:

Darkest Night comes in a standard flip-up cardboard box that’s housed in a sleeve, which depicts artwork and tells a little bit about the game. The game board comes in two versions: one flip-out mat and a three-piece board. The components are all punch-out chits on thick chit board, and the cards are thicker than your normal playing cards, which makes the components a bit stronger than with some other games. 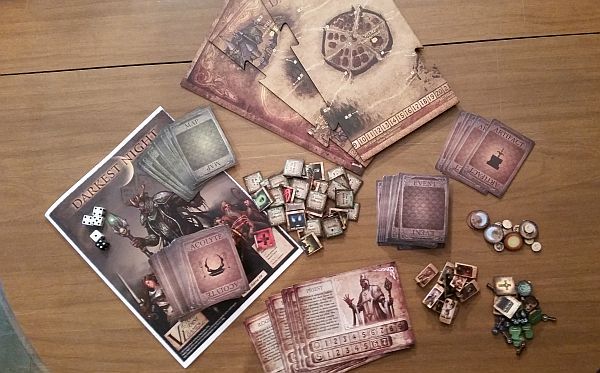 In Darkest Night, four Heroes attempt to locate three Holy Relics and pack them back to the Monastery in order to perform a ritual that will banish the evil Necromancer from the land for good. Players take the role of these Heroes, each of which embodies a specific class that you regularly see in fantasy games. Players will need to maneuver about the game board, searching in the different locations to find useful items and defeating Blights that get placed on the board by the Necromancer. 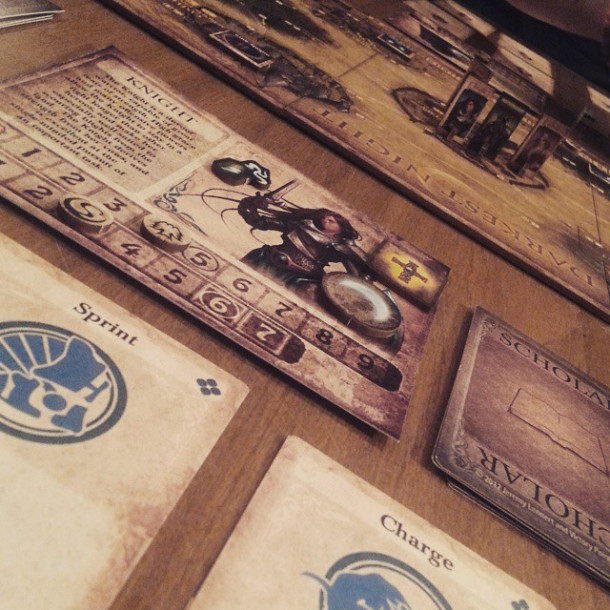 Setup for a game!

When setting up for a game of Darkest Night, you’ll place the game board out and put the Holy Relic tokens in their respective locations on the board. Each player selects a Hero to play as (some will control multiple Heroes since the game ALWAYS contains 4) and takes their Hero mat and matching Power cards. Of the Power cards, 4 will have a symbol that denotes the card is a starter Power. Players choose three of the four cards to start with and places the other back in the Power deck, shuffling it. Hero standees are placed in the Monastery, with the Necromancer placed in the Ruins. The Darkness tracker starts out on the skull symbol at the bottom of the board and then Blights are placed. Blights act as forces under the Necromancer, whether they be supernatural or monsters/enemies. Players flip the top card of the Map deck and place the shown Blight in each location on the card.  With each player having a Hero, starting Power cards, and the Necromancer’s forces in place, the game can begin.

The Prince, complete with his staring Powers.

Darkest Night takes place over a series of rounds, each with the Heroes activating and the Necromancer going last. Each player, in any order, can activate their Hero by taking one action with that Hero. Action options are as follows: 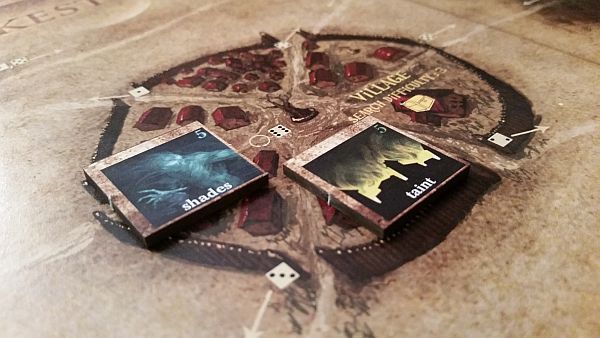 Blights affect locations and do some nasty things!

Before we go further, let’s talk about Secrecy and Grace for a moment. Secrecy is important in this game because it’s basically how known you are to the Necromancer. When you start your turn in the same location as the Necromancer you’ll automatically lose 1 Secrecy. While holding a Holy Relic you’ll lose 1 Secrecy at the start of each turn. When your Secrecy is low there’s a better chance the Necromancer will detect you and initiate combat. That’s where Grace comes in. Anytime you would lose a fight – whether against a Blight or the Necromancer – you’ll take a wound and immediately die. Each Hero can only take a single wound. Grace, however, can be spent in place of taking a wound to negate it, keeping the Hero alive. Having both high Secrecy and Grace is quite good in Darkest Night. 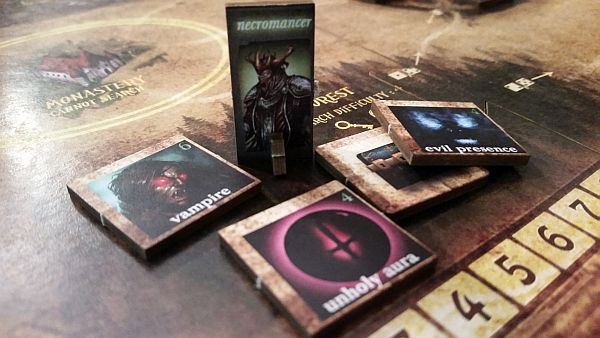 The Necromancer chilling with his Blights. You know.

Each Hero, in whatever order, will activate and take actions. At the start of the Hero’s activation they may lose Secrecy (as noted above). Before taking an action you must draw an Event card and resolve it (unless you’re at the Monastery). If you’re at the same location as the Necromancer and your Secrecy is at zero, then you’ll immediately have to fight the Necromancer instead of resolving an Event card. Event cards are pretty straightforward, as they’ll either tell you to roll dice, fight enemies, or simply lose resources. If you have to fight, you’ll roll a certain number of fight dice (usually 1 unless you have passive powers that say otherwise) against the enemy’s defense. Sometimes you can evade instead, and you’ll roll evasion dice to avoid the enemy all together. After the dice are rolled, you’ll count your successes, those being dice rolled that show higher than either the enemy’s defense or evasion, depending on what you chose to do. If you succeed, usually nothing happens, but if you fail you’ll have to take a wound.

As an action a Hero can choose to fight a Blight in their location. This works the same way as above, though sometimes you’re fighting a Blight’s strength instead of some sort of defense. If you gain a success in the fight, you discard the Blight back to the supply and it no longer affects the location.

Once you’ve taken an action you’ll need to resolve any end of turn effects. For instance, if a Hero ends their turn in the same location as a Blight, they must suffer the effects of the Blight. Some Blights cause ongoing effects, others produce enemies that must be fought. In the case of the latter, defeating the Blight does not make it go away as if you chose to fight it as an action.

The Hero standees, protectors of the kingdom.

Play will continue with rounds going this way until either the Darkness tracker reaches the end of the Darkness track, the Monastery every has 5 Blights, the Holy Ritual is performed, or the Necromancer is slain. At any time if a Blight needs to be placed in a location that already has 4, the Blight is placed in the Monastery instead. If the Monastery gets 5 Blights it’s curtains for the Heroes. There are two ways to overcome the Necromancer, however, so don’t lose hope. The Heroes can perform the Holy Ritual by uncovering 3 Holy Relics from their board locations and taking them back to the Monastery. Heroes can search in the board locations to uncover various items. Each location lists the type of items most likely to be found, and the difficulty of searching. When a Hero searches they roll a search die (or dice) against the location’s difficulty. For each success their player will draw a Map card and choose one to resolve. Each Map card lists the locations, Blights, and search results corresponding to those locations. For example, searching in the Ruins will most likely end up resulting in finding keys which are needed to unlock the Holy Relics. Some other places will yield Magic Bottles, Supply Caches, and more. 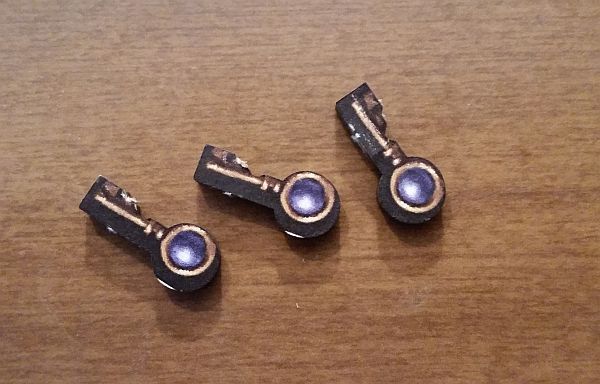 The keys – you need them to unlock the Holy Relics!

Another path to victory is the straightforward path of combat with the Necromancer. Any Hero that wields the Holy Relic and chooses to combat the Necromancer with a successful outcome has defeated the darkness and banished it from the land. This is no easy task, however, as the Necromancer has a 7 defense, which means you’ll need to roll an 8 to beat him. This can be done, though, by using Powers and buffs, along with the +1 to a combat die result that the Holy Relic gives. Once you put it to the Necromancer the game is won!

Breaking the Grip of the Necromancer

Victory Point Games’ slogan is, “The gameplay’s the thing.” After playing Darkest Night I’d have to agree with them. Their packaging looks quite simple, but their attention to gameplay is on point. Darkest Night is listed as a Euro game, and specifically I’d call it a cooperative strategic fantasy game. The way that the Heroes’ Powers work makes choosing a party very tactical, and each Hero plays out in their own definitive way. 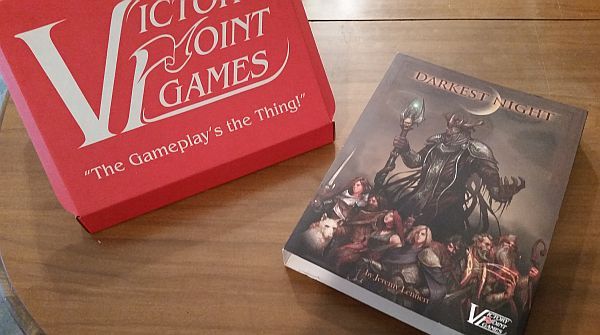 See? I told you their slogan!

There’s a hiccup here, though, as once you win against the Necromancer you’ll see yourself putting the same Heroes in for future plays. For instance, we rarely play without the Knight in our party because she’s a heavy hitter that can almost always combat the Necromancer and win, even with just using buffs from her own Powers. The Rogue is a shoe-in as well, since he can find keys much easier than other Heroes by spending Secrecy points to gain extra searches. Still, the game has remained fun even through these circumstances.

The artwork is fantastic, too, and Darkest Night is just a pretty game to look at. It gives you the sense of a gritty, darkened fantasy world where things look grim for the Kingdom. Each component is artfully designed to bring the most visually-appealing experience to you when the game hits the table. 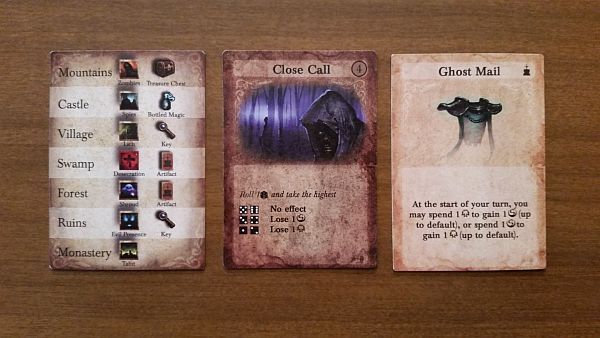 The cards are thicker than normal, and have great artwork on them. Here is a Map card, Event card, and an Artifact card.

This is where I had another issue, however. You see, the chits for Darkest Night are laser-cut onto thick chit board. On one hand it’s nice to have thick components, yet on the other it sucks when you have trouble punching them out and end up ripping some of the chits this way. What’s more is that Victory Point’s laser-cutting process leaves a high amount of black ash on the chit board. While punching out the components I got a ton of ash all over my hands that I had to wash off. The ash stayed on the punched-out chits as well, and it’s taken about three plays to get all of it off. In Victory Point’s defense they do include a little napkin with their games that’s used to wipe off the ash from the chits, but when I think about that, the money spent on the napkins could have been used to fund a different laser-cutting process, don’t you think?

Still, even with these bumps Darkest Night has become one of my favorite board games. Simply put, the game’s just a lot of fun. Even though we’ve built similar parties in each of our plays, we’ve still ended up having fun. There’s something satisfying about buffing the tar out of the Knight and having her pimp slap the Necromancer in one turn to win the game for the good guys. That being said, we’ve never succeeded at trying to perform the Holy Ritual. 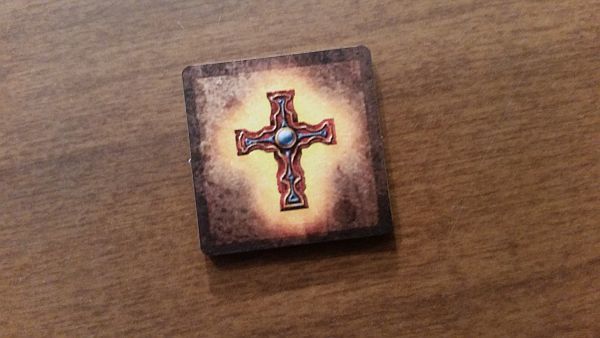 The Holy Relic, bane of the Necromancer.

The game is definitely replayable, and I’d recommend it to any group looking for a fun fantasy-themed board game. There’s even a variant to play the game with someone controlling the Necromancer, which turns it into a real thinking game. You can also play it solo, so it hits on all accounts. If you’ve not given Victory Point Games a shot yet, this is the game – and the time – to do so.